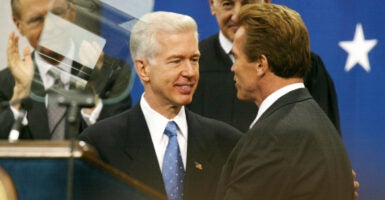 Recall efforts are common in California and other states allowing them, but putting a recall question on the ballot is rare. Pictured: California Gov. Arnold Schwarzenegger, right, is congratulated by predecessor Gray Davis after being sworn in Nov. 17, 2003, in Sacramento. (Photo: David McNew/Getty Images)

Angry Californians, fed up with some of the governor’s policies, started a petition to recall him, knowing that the incumbent had two more years in office until going before voters again.

The 1968 push to recall Gov. Ronald Reagan fell on the ash heap of history, however. The effort failed to collect enough valid signatures (12% of the votes cast in the last gubernatorial election) to be on the ballot.

Reagan was reelected as governor in 1970, and went on to have a decent political future.

Recall attempts actually are common in California and other states that allow the practice. What’s rare is getting a statewide recall drive on the ballot for voters to decide.

Of the 20 states that allow voters to recall governors, most require a signature threshold of 25% of the number of votes cast in the latest governor’s race to qualify for inclusion on the ballot, according to Ballotpedia, a nonprofit that provides election information.

That’s one reason that, since 1921, only three governors across the nation have faced recall elections—two in the past 18 years. A fourth governor was impeached and removed from office before facing voters in a recall election.

California, of course, again is gaining significant national attention to the subject of a recall. Of the 10 recall efforts that qualified for the ballot, most of the targets were members of the state Legislature, according to the California Secretary of State’s Office.

Of those 10 officials, California voters ousted six, most notably Gov. Gray Davis, a Democrat, in 2003.

The first recall of a governor in American history removed North Dakota Gov. Lynn Frazier, a Republican, in 1921.

Frazier, a big-government Republican, advocated heavy government spending. He was a member of the left-leaning Nonpartisan League, which had controlled North Dakota’s politics since 1916.

Carrying out the league’s agenda, Frazier’s administration established a state bank, state insurance programs, and an industrial commission run by the governor, the state attorney general, and the state’s agricultural commissioner.

Other North Dakota Republicans considered the Nonpartisan League to be socialist and launched an effort to recall all three officials in charge of the industrial commission—and to repeal the assorted government programs.

In a time of severe economic downturn when North Dakota’s farmers were struggling, the president of the state bank lived in a plush hotel suite at taxpayer expense. This became a rallying point for the recallers.

The ballot had eight questions, the first three on removing the officials, the other five on repealing the programs.

Voters elected a conservative Republican lawyer, Ragnvald Nestos, as the new governor as they threw out Frazier and the other two officials but opted to keep the programs in place.

“Frazier lost 51-49. Both candidates in that instance were Republicans, so it wasn’t a Democrat who won,” said Joshua Spivak, a senior fellow at the Hugh L. Carey Institute for Government Reform at Wagner College who regularly writes about recall elections for national publications and founded the Recall Elections Blog.

But Frazier quickly launched a comeback and was elected to the U.S. Senate in 1922.

In 1988, Arizona Gov. Evan Mecham, a Republican, likely would have been recalled, Spivak said, but the state Legislature beat voters to the punch by impeaching and removing him.

Supporters of the recall referendum targeting Mecham wanted it to move forward. A special election already had been set for May 17. However, in April the state Supreme Court ruled 4-1 that Mecham’s removal—and the constitutional line of succession—took precedence.

Arizona has no lieutenant governor, so Secretary of State Rose Mofford, a Democrat, became governor of Arizona. A recall election would have allowed other candidates to run.

The Legislature impeached and convicted Mecham on charges of trying to thwart an investigation of a death threat and of misusing $80,000 in state funds by lending it to his auto dealership. He later was acquitted of the charges in court.

After Mecham’s ouster, a taxpayers lawsuit challenged the need for spending state money on a recall election. The lawyer representing the taxpayer group, Andrew Gordon, argued before Arizona’s high court that “recall is the people’s alternative to impeachment.”

“Impeachment has almost always been [for] an act of malfeasance and usually has to be bipartisan to succeed,” Spivak told The Daily Signal. “Recall—depending on the state—can be entirely political and can be partisan.”

In a California recall effort that captivated America’s attention in 2003 and led to actor and bodybuilder Arnold Schwarzenegger, a Republican, becoming governor of the largest state in the nation, voters ousted Davis less than a year after electing him to a second term.

The recall largely was based on policy. Voters saw Davis as having bungled California’s energy situation—resulting in rolling blackouts—and the budget, increasing car registration fees and gasoline prices.

After recall made it to the ballot, 135 candidates jumped into the race, among them liberal political activist Arianna Huffington and television actor Gary Coleman. More substantive figures included Lt. Gov. Cruz Bustamante, a Democrat, and state Sen. Tom McClintock, a Republican. However, the contest largely was perceived as between Democrat Davis and Republican Schwarzenegger.

Voters had two questions: Should they recall Davis? If so, who should they choose to be governor?

The special election in October 2003 drew 9.4 million voters, an 11% increase in turnout from the regular governor’s race in November 2002. In the end, 55% voted to recall Davis.

Though short of a majority, Schwarzenegger’s 48% of the vote gave him the victory and was overwhelming given the size of the field.

Just less than a decade later, in Wisconsin during the summer of 2012, political enemies of Gov. Scott Walker, a Republican, gained about 900,000 signatures to put a recall on the ballot.

Walker went on to resoundingly win his second statewide contest in less than two years, however, thrusting him into the national spotlight as the first governor ever to survive a recall. In fact, Walker won the recall by a wider margin than he had won his first election as governor.

Walker had taken on the public employee labor unions, part of a campaign promise in 2010 to rein in state spending on public employee pensions and benefits that were draining the budget, forcing a $3.6 billion deficit and creating the nation’s fourth-highest state tax burden.

Walker pushed reforms through Wisconsin’s Legislature, asking public sector workers to contribute more of their salaries to pensions and health insurance while limiting the collective bargaining power of public sector unions. Millions from outside the state, much of it from organized labor and Hollywood, poured in to defeat Walker.

But it didn’t pay off. In June 2012, Walker captured 53% of the vote, beating Milwaukee Mayor Tom Barrett, a Democrat, by seven points.

Walker went on to win election to a second term as governor in 2014, but narrowly lost his race for a third term in 2018.

2. What Are Roots of Recall?

Back in 1631, the Massachusetts Bay Colony implemented the concept of recall by allowing one elected body to remove an elected official, Spivak said.

Recalling officials then became part of the Virginia Plan during the 1787 Constitutional Convention in Philadelphia. However, the nation’s Founders rejected making recall of federal officials part of the Constitution.

The matter mostly lay dormant until the early 1900s and the Progressive Era, mostly in Western and Midwestern states.

Currently, 38 states have some form of recall mechanism,  mostly for local elected officials. After World War I, recall elections became more common at the local level as a backlash against corruption and political bosses, according to Governing magazine.

By the early 2000s, more than 5,000 recall elections had occurred for state and local officials.

Michigan and Oregon were the first states to enact recall statutes, doing so in 1908 for state officials such as governor and legislators. The trend spread to most Western states.

The most recent states to allow for ousting a governor are New Jersey in 1993, a novelty among Northeastern states, and Minnesota in 1996, catching up with other Midwestern states.

“This is relatively new for Northeastern states. New Jersey adopted it in 1993,” Spivak said. “Pennsylvania adopted it at one point, but the state Supreme Court struck it down.”

Spivak said every Western state has a recall mechanism except Utah. This is in part because Western states are relatively newer.

Although only four recall petitions gained enough signatures to put the future of governors on the ballot (counting the preempted Arizona recall), 39 recall elections targeted state legislators, according to the National Conference of State Legislators.

This has become far more common in the past decade, with 11 of the 39 recall elections occurring since 2011 and 45% of all legislative recalls occurring between 2011 and 2013.

If a recall initiative qualifies for the ballot, the odds are at least slightly against a lawmaker’s survival. A total of 55% of recall elections ousted a lawmaker, according to the National Conference of State Legislators.

The rules vary among the 20 states that allow voters to recall a governor.

States such as North Dakota, California, and Wisconsin—the only three to have held recall elections for governor—allow them for almost any reason, such as a policy dispute.

Other states—such as Alaska, Georgia, Kansas, Minnesota, Montana, Rhode Island, and Washington—require a violation of the law, malfeasance or misconduct in office, or physical or mental unfitness for office, according to Ballotpedia.

The state of Virginia is unique. State law requires an actual offense, such as neglect of duty or misuse of office and among the lowest signature thresholds—10% of the number of votes cast in the last gubernatorial election.

But from there, it’s not Virginia’s voters who decide. A circuit court hears evidence before a jury. The governor has the right to repeal the ruling to the state Supreme Court. The process has yet to be tested in the state.

Other states that allow for the recall of a governor are Arizona, Colorado, Idaho, Illinois, Louisiana, Michigan, Nevada, New Jersey, and Oregon.

Some states allow for a recall and immediate election of someone to replace the governor; in other states, the lieutenant governor simply takes over.

Some critics object to the concept of a recall election, contending that short of a corrupt offense, an elected official should serve out his term.

Spivak noted that in most jurisdictions, voters approved amending a state constitution or a city charter to provide for recall elections. This came before a single recall petition ever was introduced.

“The real question is who decides recall? In most cases, it’s up to the voters,” Spivak said. “So, if you have a problem with recall as a concept, take it up with the voters.”