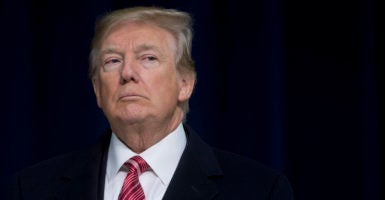 Even if the Democratic majority in the House votes to impeach Trump, the Republican majority in the Senate could decide to not even consider removing him from office. (Photo: Saul Loeb/AFP/Getty Images)

President Donald Trump is a bull in a china shop. He says inadvisable things to inadvisable people, mainly because he is inadvisable—literally no one can advise him.

So when an intelligence community whistleblower came forward with an allegation that, on a call with the Ukrainian president, Trump proposed a quid pro quo with the Ukrainian government—release of military aid in exchange for a Ukrainian investigation into Joe Biden and son Hunter Biden—the allegation didn’t appear absurd on its face.

The timeline, after all, seemed to match up: Trump allegedly suspended military aid to Ukraine personally a week before talking with the Ukrainian president, only to release the aid after the holdup was met with public scrutiny.

Then it seemed to fall apart. It turned out that the Ukrainian government apparently had no clue that Trump was even withholding military aid—and without such a quid, there couldn’t be a pro quo. The Ukrainian president publicly proclaimed that Trump hadn’t pressured him.

Now, after Trump predictably took to Twitter to rail against the whistleblower and the Democrats, Democrats claim his behavior amounts to “witness intimidation.”

Perhaps Democrats will come up with something. That’s always possible, given the amount of leaking and loose talk around the White House. But barring some sort of cataclysmic revelation, the impeachment effort seems to be stalling out.

And based on the current evidence, it should.