Pelosi Evasive on Strategy for Impeachment Trial in Senate 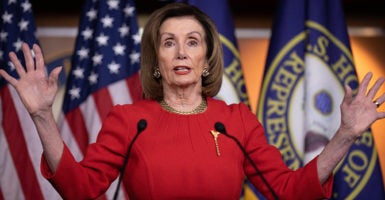 “It really is interesting to see the response we are getting, bipartisan, across party lines,” Pelosi, D-Calif., told reporters Thursday. “I myself want to say, I have a spring in my step because of the moral courage of our caucus.”

The House voted Wednesday night to impeach Trump for abuse of power and obstruction of Congress in connection with his July 25 phone conversation with Ukrainian President Volodymyr Zelenskyy that broached the topics of former Vice President Joe Biden and his son Hunter Biden’s high-paying job with Ukraine energy company Burisma.

The impeachment process is supposed to move next to a Senate trial, where 67 senators—or a two-thirds majority—is required to remove a president.

However, Pelosi wouldn’t directly address questions about when the House would deliver the two articles of impeachment—for abuse of power and obstruction of Congress—to the Senate for a trial.

“When we bring the bill, just so you know, there is a bill made by the Rules Committee that we can call up anytime in order to send it over to the Senate, and then the next step, whatever you want to call it, the trial, that is where you put the [House] managers,” Pelosi said, in a somewhat rambling answer.

If the House doesn’t transmit the articles of impeachment to the Senate, it could prolong the beginning of the trial and thus offer House Democrats leverage in shaping the rules.

The House managers are lawmakers picked by Pelosi who will act as prosecutors in the Senate trial.

“I’ve not prepared to put the managers in their bill yet because I don’t know the arena we are in,” Pelosi said. “Frankly, I don’t care what the Republicans say. … We’d like to see a fair process, but we’ll see what they have and we’ll be ready for what that is.”

Trump took a shot at the speaker in a tweet after her morning press conference.

“Pelosi feels her phony impeachment HOAX is so pathetic she is afraid to present it to the Senate, which can set a date and put this whole SCAM into default if they refuse to show up! The Do Nothings are so bad for our Country!” the president tweeted.

After answering two questions, Pelosi refused to take any more questions on impeachment, and asked why reporters weren’t asking questions about the United States-Mexico-Canada Agreement on trade, or on other issues.

However, she did take a swipe at Senate Majority Leader Mitch McConnell, R-Ky., for his earlier Senate floor speech.

During his remarks on the Senate floor, McConnell said the Founders envisioned that the Senate would take the long view and safeguard institutions to “keep political passions from literally boiling over.”

“The Senate exists for moments like this,” McConnell said. “That’s why the Senate has the final say on impeachment.”

“Historians will regard this as a great irony of our era, that so many who profess such concern for our norms and traditions, themselves proved willing to trample our constitutional order to get their way,” McConnell said.

The Senate’s top Republican added, “A political faction in the House of Representatives has succumbed to a partisan rage.”

Talking specifically about the obstruction of Congress charge, McConnell said a clash between the executive and legislative branches is not unprecedented.

McConnell noted the House impeachment articles don’t accuse Trump of a specific crime and essentially seek to remove an elected president with a “partisan vote of no confidence” as opposed to the constitutional language of high crimes and misdemeanors:

It will be unprecedented if we agree that any future House that dislikes any future president can run through an unfair inquiry, skip the legal system, and paralyze the Senate with a trial. If the House can do that, it will under this precedent.