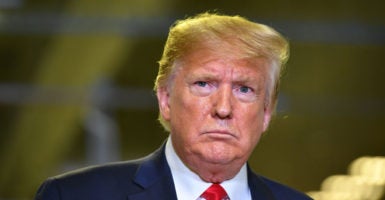 As House Intelligence Chairman Adam Schiff, D-Calif., passed the impeachment inquiry baton to the Judiciary Committee this week, he said the central allegation against President Donald Trump is that the president “solicited foreign interference in the 2020 presidential election.”

This accusation will likely be the heart of any articles of impeachment the Judiciary Committee produces against the president.

If that’s the Democrats’ choice, so be it. But choices have consequences. If the Democrats go with solicitation, they’ll have to actually prove it.

As House Democrats have pursued an impeachment, they’ve turned to focus groups to find the phrases that will serve them best. This marketing research led them to drop the “quid pro quo” accusation.

It turns out most people realize a quid pro quo is nothing more than an exchange of one thing for another—something that happened this morning when I filled up my car at the gas station and I paid with my credit card.

As the focus group feedback rolled in, Schiff shifted to words like “bribery,” “extortion,” or “shake-down.” Perhaps Democrats have now settled on “solicitation” for the same reason.

While specific terms may resonate more or less among focus groups, some of them also have specific legal definitions. Under federal law (18 U.S. Code §373), for example, solicitation of a crime of violence requires not only a specific intent but also that the solicitation occurs “under circumstances strongly corroborative of that intent.”

The Justice Department’s Criminal Resource Manual explains that “the Government must establish that the defendant had the intent that another person engages in conduct constituting a felony crime of violence in violation of Federal law. The intent must be shown to be serious by strongly corroborative circumstances. Second, the Government must prove that the defendant commanded, induced, or otherwise endeavored to persuade the other person to commit the felony.”

The whole impeachment ballgame comes down to whether Trump took certain actions in relation to Ukraine for the specific purpose of manipulating the 2020 presidential election.

The House Intelligence Committee’s report states as its first finding of fact, for example, that Trump “solicited the interference of a foreign government, Ukraine, in the 2020 U.S. presidential election.”

Stanford professor Pamela Karlan similarly claimed that Trump sought “the aid of a foreign government in his reelection campaign.” Trump, she said, literally demanded “foreign interference in our elections.”

No, an offense does not have to be criminal to be impeachable. But if Democrats are going to frame the case against Trump in terms of a recognized crime like solicitation and if they are going to claim that Trump acted with this intent, then they should have to prove it.

While Democrats have repeatedly claimed that Trump solicited foreign interference in the 2020 election, repeating a claim does not prove it.

It is obviously insufficient, for example, to speculate that if Zelenskyy had done what Trump asked (he did not), it could have resulted in something Trump might have used next year in his reelection campaign.

Legitimate reasons for Trump’s request to Zelenskyy unrelated to the 2020 election increase the need for concrete, actual evidence of the intent that Trump’s critics claim.

The House Intelligence Committee hearings highlighted that Trump sometimes conducts foreign policy, including with respect to Ukraine, in ways that frustrate professional diplomats and Trump’s critics. OK, but is that evidence that Trump, in Feldman’s words, sought “personal political and electoral advantage over his political rival?”

Trump critics, both in and outside of government, have whipped each other into a frenzy that appears to be affecting their judgment, Turley said.

So far at least, they seem to be substituting “I wouldn’t put it past him” or “sounds like something Trump would do” for evidence that Trump acted with the intent required to establish what they say he did.