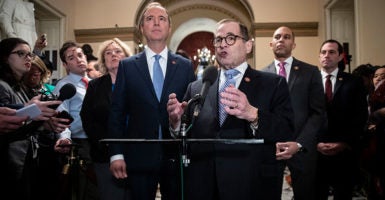 Three of the House Democrats prosecuting President Donald Trump in the Senate’s impeachment trial—Jerry Nadler of New York, Zoe Lofgren of California, and Sylvia Garcia of Texas—are among lawmakers who voted last year to advance the president’s removal.

Eight days after that vote, Trump talked by phone with Ukrainian President Volodymyr Zelenskyy in the July 25 call in which the leaders discussed former Vice President Joe Biden and his son’s highly paid role on the board of Ukrainian energy company Burisma.

That conversation was the basis for House Democrats’ formal inquiry leading to Trump’s impeachment.

On July 17, however, Rep. Al Green, D-Texas, had brought his third impeachment resolution to the House floor, forcing a procedural vote on articles of impeachment against Trump for disparaging “the squad,” the name for a group of four progressive House freshmen.

The vote was on whether to allow debate or to table the resolution. The motion failed, with 332 lawmakers voting to table the matter—in other words, against impeachment.

But 95 Democrats—the highest pro-impeachment tally to that point—voted against tabling Green’s resolution.

Nadler, chairman of the House Judiciary Committee, explained at the time that he wanted to keep options open.

“I opposed this procedural motion because this article of impeachment should have been referred to the House Judiciary Committee,” Nadler said. “My hope is that future impeachment resolutions be referred here as well, so that they can also be considered as part of the committee’s overall response to clear allegations of presidential misconduct.”

The Senate trial of Trump began Tuesday based on two articles of impeachment, passed by the House in December and accusing him of abuse of power and obstruction of Congress. Nadler and the other six House managers, or prosecutors, and the president’s lawyers debated the rules of the trial going forward.

The House’s Dec. 18 votes to impeach Trump on two charges, taken together, represented the fourth overall impeachment resolution taken up by the full House in some form.

Other House managers spoke in favor of an impeachment inquiry.

Well before the anonymous whistleblower complaint arising from the Trump-Zelenskyy phone call, Crow wrote a piece for Medium calling for an impeachment inquiry and saying:

I didn’t run for office because I dislike Donald Trump. I ran because I love our country. It’s that same pride in our democracy and respect for our Constitution that fuels my support for an impeachment inquiry. We must complete the work started by Special Counsel Robert Mueller. It’s a solemn responsibility of Congress that the Framers of our Constitution included to protect the rule-of-law.

Green previously forced a procedural floor vote in December 2017 on a resolution accusing Trump of “inciting hatred and hostility.”

Only 58 Democrats backed this first impeachment resolution in a floor vote, and none of the seven House impeachment managers were among them.

Long before House Democrats drafted the two articles of impeachment against Trump for “abuse of power” and “obstruction of Congress,” neither of which is a criminal statute, Green argued that evidence of a crime is not necessary to impeach a president.

Demings didn’t vote for any of the Green resolutions. But shortly after release of the Mueller report in April 2019 and long before the Ukraine controversy emerged, she expressed impatience with the slow pace and frustration with Mueller.

“We are struggling to justify why we aren’t beginning impeachment proceedings,” said Demings, former police chief of Orlando, Florida, according to Politico. “As a 27-year law enforcement officer, and while I understand we need to see the full report and all supporting documents, I believe we have enough evidence now.”

“Mueller didn’t do us any favors,” Demings added, claiming the special counsel only “left us bread crumbs to follow.”

On May 21, Demings said on CNN: “I just believe we are at the point of opening impeachment proceedings.”

The bulk of arguments Tuesday revolved around whether the Senate would allow witness testimony and the gathering of new documents.

By late afternoon, the Senate voted along party lines, 53 Republicans to 47 Democrats, to reject an amendment by Minority Leader Charles Schumer, D-N.Y., to subpoena White House documents and witnesses for the trial.

Democrats had rushed the articles of impeachment through the House and now are calling to slow down the Senate trial, said Marc Short, chief of staff to Vice President Mike Pence.

“Yet, what you hear from [Democrats] today is that Senate Republicans are moving too quickly, we have to slow down,” Short said. “Obviously there is enormous hypocrisy. The American people see that. They are ready for this chapter to be over.”