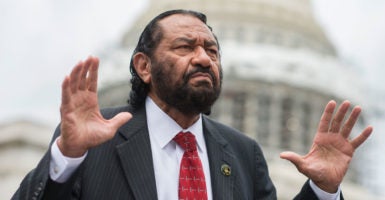 “The people who say, 'What law did he break? What rule did he break?,' they are perpetrating upon you a belief that is totally inaccurate,” Rep. Al Green, D-Texas, says of impeaching President Donald Trump. (Photo: Tom Williams/CQ Roll Call/Newscom)

High crimes and misdemeanors are irrelevant to whether President Donald Trump should be impeached by the House, despite the Constitution, a Texas lawmaker said.

“The people who say, ‘What law did he break? What rule did he break?,’ they are perpetrating upon you a belief that is totally inaccurate,” Rep. Al Green, D-Texas, said Thursday at a yearly meeting of the Congressional Black Caucus Foundation in Washington.

“You decide that you are not going to be nice to suspects when you arrest them, you tell police, ‘You don’t have to be nice,’ … and ban children on the border of color, you produce a policy that separates them from their parents,” Green said.

The Texas Democrat was referring to Trump’s reportedly quipping to police officers, ‘Please don’t be too nice’ to those they arrest, as well as the president’s former policy of separating adults and children who illegally crossed the border.

“Now, this might be debatable, [but] for me, when I add all of this together, I find that I have a person who is placing his bigotry into policy that is harmful to our society, and for that, he ought to be impeached,” Green said.

Green made his remarks at a panel session titled “Impeachment: A Necessary Remedy for Bigotry in Policy,” during the Congressional Black Caucus Foundation’s Annual Legislative Conference.

To be removed from office under the Constitution, a president must be charged by the House and tried and convicted by the Senate.

In 2017, Green formally drafted articles of impeachment citing the president’s firing of FBI Director James Comey last May, saying it was “obstruction of justice by the president” and that “impeachment by Congress is the solution.”

Green also has used Twitter to amplify his push for the House to impeach Trump:

For the love of country, we must get beyond the President’s bigotry being a talking point and make it an action item. #CountdownToImpeachment #ImpeachmentIsNotDead https://t.co/SkTQcKEikY

"Where there is a will, there is a way." The framers of the Constitution provided impeachment as the way to remove an unfit President. The ultimate question is, does Congress have the will? #CountdownToImpeachment #ImpeachmentIsNotDead

What we have long recognized, others are starting to acknowledge: an unfit president should be impeached. #CountdownToImpeachment #ImpeachmentIsNotDead

Ron Fein, legal director of the group Free Speech for People and co-author of “The Constitution Demands It: The Case for the Impeachment of Donald Trump,” said the country has been subjected to the “Trump effect.”

“There is something called the ‘Trump effect,’” Fein, also on the panel, said. “What sociologists have noticed is that when Trump gives a rally in a certain city, if you compare that city to the week before or the week after, or if you compare it to other cities on that same day, there are more racial incidents, more violent incidents in schools and communities in these cities where Trump is giving a rally.”

And what is happening is, Trump is tearing open some racial wound that had certainly not been healed but we were starting to make some progress on, and he is tearing them apart.

Allan Lichtman, professor of history at American University and another panelist, said that impeaching Trump is necessary for preserving society.

“Impeachment is the appropriate remedy for a runaway, rogue president who endangers our national security, our liberties, our freedom, our great traditions like an independent judiciary, a free press, tolerance among different groups in the country,” Lichtman said. “And don’t get hung up on whether it is a technically indictable crime under the statute law.”

Although not on the panel, Rep. Sheila Jackson Lee, D-Texas, interjected a few words at Green’s request.

Lee asked attendees to be unafraid in the quest to impeach Trump.

The Constitution actually spells out presidential powers in Article 2, Sections 1 through 3, followed by Section 4 on impeachment, which reads:

The President, Vice President and all civil Officers of the United States, shall be removed from Office on Impeachment for, and Conviction of, Treason, Bribery, or other high Crimes and Misdemeanors.

Not all those attending the session appeared to be completely supportive of the calls to impeach Trump.