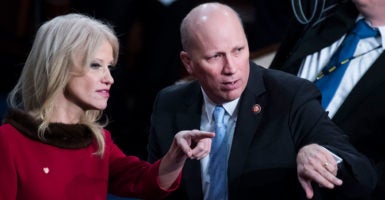 A Texas lawmaker says the situation on the southern border is “a real crisis” because human traffickers are exploiting our asylum laws, which he says are “broken.”

“We have a sophisticated enterprise where cartels are profiting by moving people across the border,” Rep. Chip Roy, R-Texas, said on the fourth installment of the House Freedom Caucus’ new podcast series.

The podcasts are hosted by Rep. Jody Hice, R-Ga.

Roy, a first-term lawmaker, said that while traffickers were still moving marijuana, they were also “moving towards human trafficking for profit.”

“We know, talking to Border Patrol,” Roy said, “that in the area in and around the Rio Grande Valley sector, the Gulf Cartel, particularly in Reynosa faction of the Gulf Cartel, will make upwards of $130 million, probably more now this year alone, moving upwards of 400,000 people through that part of the border.”

Roy, 46, who represents Texas’ 21st Congressional District, recently visited the border town of McAllen, Texas, to survey the situation there. The 21st District abuts Austin and San Antonio, but does not share a border with Mexico.

“We’ve got a broken system that the cartels are profiting on, because they recognize that our asylum laws are broken, and they’re abusing those asylum laws and that judges have now created essentially a de facto catch-and-release environment, and we’re not doing anything to stop it,” said Roy, who succeeded longtime Rep. Lamar Smith, a fellow Republican, who retired after 16 terms.

Hice, in his opening monologue, referenced remarks from Department of Homeland Security Secretary Kirstjen Nielsen, saying the border crisis will not improve until it is adequately addressed.

“We all know it’s a big problem,” Hice said. “It’s not going to have an easy solution, but what I do know is that the first step is simple. The first step that must be taken is straightforward. It is abundantly clear, and that is to secure the southern border. Time and again, unfortunately, we have failed to do so on the congressional level.”

President Donald Trump declared a national emergency on Feb. 15 in order to unlock funding for his promised barrier along the U.S.-Mexico border. The House and Senate subsequently passed resolutions to overturn the national emergency declaration, but on Tuesday, the House failed in an attempt to override Trump’s veto.

Roy said that some of the people who are being hurt most by the crisis on the border are children who are trafficked across by drug cartels.

“Historically, you never had children coming without the mom,” Roy  said, noting that in the 2018 fiscal year, there were about 26,000 unaccompanied minor children who crossed the border.

“So, when you start seeing where you’ve got a guy, a ‘dad,’ with a child … red flags should go up, and as a former federal prosecutor … that’s a real problem.”

You can listen to the full podcast here: