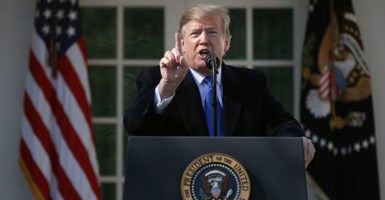 President Donald Trump speaks on border security during a Rose Garden event Friday at the White House, where he said he would declare a national emergency to free up federal funding to build a wall along the southern border. (Photo: Chip Somodevilla/Getty Images)

President Donald Trump predicted the Supreme Court will ultimately vindicate his declaration of a national emergency for constructing a wall on the southern border.

“I’ll sign the final papers as soon as I get into the Oval Office, and we will have a national emergency, and we will then be sued, and they will sue us in the 9th Circuit, even though it shouldn’t be there, and we will possibly get a bad ruling, and then we’ll get another bad ruling, and then we’ll end up in the Supreme Court, and hopefully we’ll get a fair shake and we’ll win in the Supreme Court,” Trump said in the Rose Garden Friday.

In her weekly press conference Thursday, House Speaker Nancy Pelosi, D-Calif., said what’s happening at the border is not a crisis and warned that Trump could be making an executive overreach that a future Democratic president could use as a precedent.

“If the president can declare an emergency on something that he has created as an emergency, an illusion that he wants to convey, just think of what a president with different values can present to the American people,” she said.

“A Democratic president can declare emergencies as well,” Pelosi added. “So, the precedent that the president is setting here is something that should be met with great unease and dismay by the Republicans.”

Most Republicans seem to be backing the president, but several are critical.

Meanwhile, Sen. Rand Paul, R-Ky., criticized both the legislation and what he called “extraconstitutional executive actions.”

Congress failed to adequately address the border crisis that has “reached a crescendo” with the recent migrant caravans, but the president’s declaration carries “significant downside,” said Heritage Foundation President Kay Coles James in a statement.

“Frustrated with Washington, President Trump believes he has no choice but to take this action today. While it is strictly constitutional, it carries significant downside,” James added. “This creates a dangerous precedent for future administrations and exposes the critical need for border security to the whims of activist federal judges.”

Presidents have statutory authority with congressional checks and balance to declare a national emergency. However, typically presidents declared these in the case of a natural disaster, terrorist attack, or war. This one will likely face a legal challenge as it comes in the backdrop of a policy debate.

In 1976, a heavily Democratically-controlled Congress passed the National Emergencies Act with bipartisan support and President Gerald Ford, a Republican, signed it into law.

The law places a statutory framework in place allowing a president to declare a national emergency, with limitations. Mainly, Congress may terminate the emergency declaration if it has the votes to do so. Also, a president must renew the declaration of an emergency after 180 days.

The Democrat-controlled House is expected to vote on a resolution of disapproval on the declaration.

Asked by CNN reporter Jim Acosta “What do you say to your critics who say you are creating a national emergency?”, Trump referenced the “angel families,” a group whose family members were murdered by illegal immigrants, and who sat in the front row of the Rose Garden press conference.

Trump responded, “I would ask the Angel Moms: Do you think I’m creating something?”

Some of the women then held up pictures of slain family members, as Trump continued, “Ask these incredible women who lost their daughters and their sons, because your question is a very political question because you have an agenda. You’re CNN. You’re fake news.”

Senior administration officials told reporters $2.5 billion will come from the Defense Department drug interdiction fund, another $3.5 billion will come from the military construction budget, and $600 million from the Treasury Department’s drug forfeiture program. Combined with the $1.37 billion approved by Congress for a wall, which the president signed, Trump noted he has almost $8 billion for wall construction.

Trump noted the increased military budget and said some generals approved of applying military dollars to the wall.

“We’ve got to get rid of drugs, gangs, and people. It’s an invasion. We have an invasion of drugs and criminals coming into our country that we stop, but it’s very hard to stop. With a wall, it would be very easy,” Trump said.

In response to a question, Trump said conservative commentators were not forcing his hand, and mentioned Rush Limbaugh, Sean Hannity, Laura Ingraham, and Tucker Carlson as people who support his policies, but were open to criticizing him. He also said he hadn’t spoken to Ann Coulter, one of Trump’s earliest supporters who has been highly critical in recent months.

Trump initially asked Congress for $5.7 billion to build more than 200 miles of physical barrier along the southern border.

Congress voted Thursday to fund $1.37 billion for 55 miles of a barrier, but with many strings that critics say could impede construction.

The standoff over the wall led to the longest government shutdown in history, as 25 percent of the government was shutdown for 35 days beginning in late December.

About 1 in 3 migrant women are sexually assaulted, according to a 2017 report by Doctors Without Borders.

Customs and Border Protection reported stopping almost 17,000 adults at the southern border who had criminal records in fiscal year 2018. Immigration and Customs Enforcement reported agents apprehended about 6,000 known or suspected gang members at the border.

Trump is winning the immigration debate, Larry Kudlow, director of the National Economic Council, told The Daily Signal on Thursday.

“The president has done a very good job persuading Americans of the need for strong border security, including the wall,” Kudlow said before the White House formally announced whether Trump would support the deal.

“The bigger picture here is that he has campaigned hard with facts and figures and the right spirit,” Kudlow continued. “We need strong border security, including the wall, and that there will be immigration reform down the road. I think he absolutely won that round.”