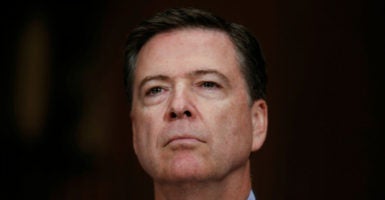 President Donald Trump on Tuesday evening fired FBI Director James Comey, amid rising controversy over what Comey told Congress regarding a top Hillary Clinton aide and an ongoing investigation into Russian interference in the presidential election.

“Today will mark a new beginning for our crown jewel of law enforcement,” @POTUS says.

Numerous Democrats are calling for appointment of a special prosecutor to investigate questions surrounding Russia, claiming the Justice Department and FBI no longer are independent.

Trump issued a firing letter to Comey in which the president appeared to thank Comey for telling him the FBI wasn’t investigating him. The letter said:

I have received the attached letters from the Attorney General and Deputy Attorney General of the United States recommending your dismissal as the Director of the Federal Bureau of Investigation. I have accepted their recommendations and you are hereby terminated and removed from office effective immediately.

While I greatly appreciate you informing me, on three separate occasions, that I am not under investigation, I nevertheless concur with the judgment of the Department of Justice that you are not able to effectively lead the bureau.

It is essential that we find new leadership for the FBI that restores public trust and confidence in its vital law enforcement mission.

I wish you the best of luck in future endeavors.

Comey was speaking to agents at the FBI’s field office in Los Angeles when the news of his firing came on TV, the Associated Press reported, citing a law enforcement official who was there. The FBI director chuckled, finished his remarks, and later returned by plane to Washington, AP reported.

In a public statement, Trump said:

The FBI is one of our nation’s most cherished and respected institutions and today will mark a new beginning for our crown jewel of law enforcement.

Comey, 56, last week testified before the Senate Judiciary Committee that Clinton confidant and campaign aide Huma Abedin forwarded “hundreds of thousands” of Clinton emails to her husband’s laptop computer. Clinton was secretary of state at the time, and some emails allegedly included classified information.

The FBI, in an embarrassment for Comey, clarified in a letter to the committee Tuesday that only a “small number” of emails had been forwarded to the laptop.

President Barack Obama nominated Comey in 2013 to what was supposed to be a 10-year appointment after the senior Justice Department official’s more than 30 years in law enforcement.

In the early days of his presidency, Trump announced he would keep Comey as FBI director, publicly giving him a hug and whispering something in his ear two days after his Jan. 20 inauguration. 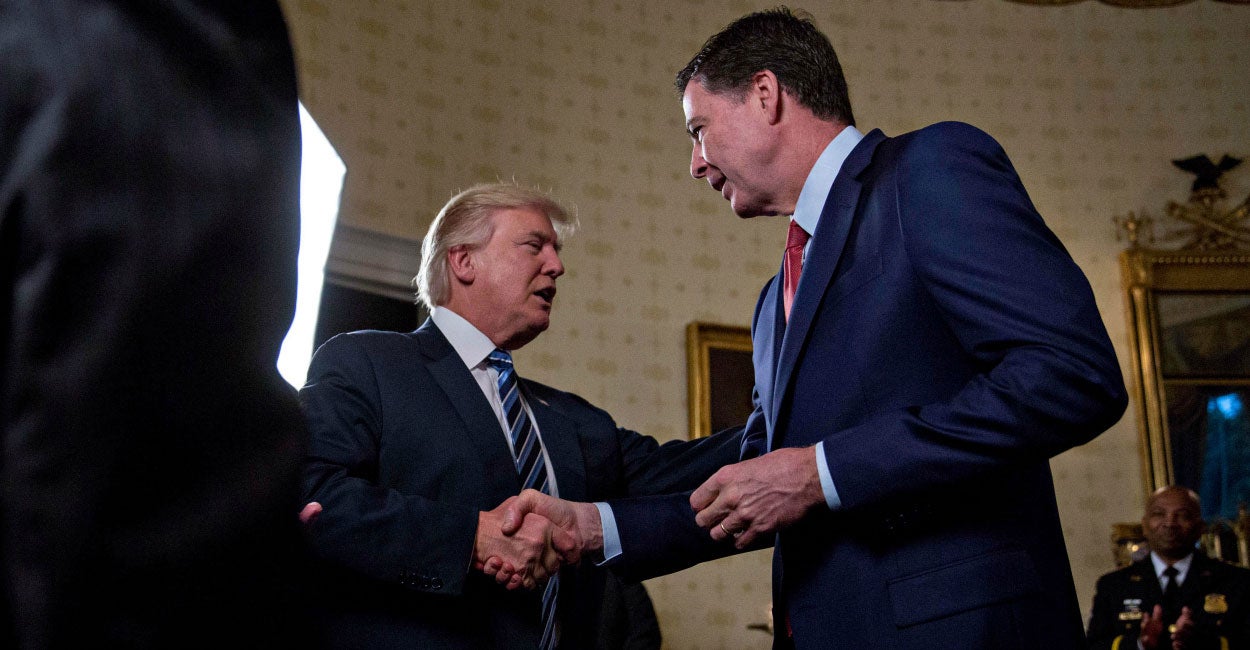 Comey had announced in July that the FBI would not recommend that the Justice Department charge Clinton, about to become the Democrats’ nominee for president, for conducting official and often sensitive State Department business with a private email account over a private server at her home.

In October, 11 days before the Nov. 8 election, Comey announced a reopening of the investigation with the discovery of the emails sent by Abedin to the laptop of her husband, former New York congressman Anthony Weiner.

Two days before the election, Comey announced that the FBI had cleared Clinton.

In a public interview last week, Clinton blamed Comey in part for her loss to Trump in the election.

Comey deputy Andrew McCabe, who has his own ties to the Clinton camp, is expected to serve as acting director until Trump nominates a successor and the Senate confirms that nominee.

The handling of the Clinton email investigation is a clear example of how Comey’s decisions have called into question the trust and political independence of the FBI. In my efforts to get answers, the FBI, under Comey’s leadership, has been slow or failed to provide information that Comey himself pledged to provide.

The effectiveness of the FBI depends upon the public trust and confidence. Unfortunately, this has clearly been lost.

President Trump’s firing of Director Comey sets a deeply alarming precedent as multiple investigations into possible Trump campaign or administration collusion with Russia remain ongoing, including an FBI investigation. This episode is disturbingly reminiscent of the Saturday Night Massacre during the Watergate scandal and the national turmoil that it caused. We are careening ever closer to a constitutional crisis, and this development only underscores why we must appoint a special prosecutor to fully investigate any dealings the Trump campaign or administration had with Russia.

Other Democrats, such as Rep. Gerry Connolly, D-Va., a member of the House Oversight and Government Reform Committee, had their own speculation.

Trump fires FBI Dir Comey. Maybe he was getting too close to the Russia connection?

Another member of the House oversight panel, Rep. Trey Gowdy, R-S.C., thanked Comey for his service.

While Sen. John McCain, R-Ariz., hasn’t joined Democrats in calling for a special prosecutor to investigate Russian interference in the election, he did renew his call for a select committee to investigate.

Meanwhile, Rep. Justin Amash, R-Mich., says he is writing legislation to establish an independent commission on the Russia questions.

My staff and I are reviewing legislation to establish an independent commission on Russia. The second paragraph of this letter is bizarre. https://t.co/wXeDtVIQiP

I’ve said it before and will again – we must have a special prosecutor to oversee the FBI’s Russia investigation. This cannot wait. https://t.co/Z9eeGNLTzr

We have been calling for #FBIDirector #Comey‘s firing for a long time. Today, your voice was heard: https://t.co/4fqOi6KMxo

Rachel del Guidice, Ken McIntyre, and Josh Siegel contributed to this report, which has been updated.