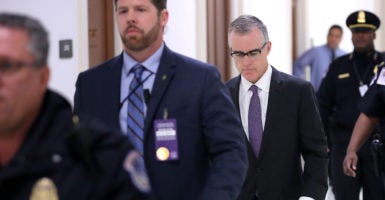 Former FBI Deputy Director and Acting Director Andrew McCabe deserves to be prosecuted on charges of lying to investigators.

Deputy Attorney General Jeffrey Rosen has rejected a request by McCabe to block such a prosecution, Fox News reported Thursday after U.S. Attorney for the District of Columbia Jessie Liu recommended prosecuting McCabe.

This is the right decision by Rosen and Liu. The American people need to be reassured that the rules the FBI applies to the rest of us apply equally to its own agents and lawyers.

Justice Department Inspector General Michael Horowitz released a report last year concluding that McCabe lied to then-FBI Director James Comey, to other FBI agents, and to officials of the Office of the Inspector General about leaks to a Wall Street Journal reporter.

McCabe made unauthorized disclosures about the FBI’s investigation into the Clinton Foundation. He then lied about it when questioned, including under oath to the inspector general, Horowitz’s report said.

According to the inspector general’s report, “law enforcement sensitive information” about the Clinton investigation was disclosed in an Oct. 20, 2016, Wall Street Journal article. Until that article was published, the FBI – as is its normal procedure – had refused to confirm whether there was an ongoing investigation.

McCabe disclosed a communication he had received from an Obama Justice Department official expressing his concerns over the FBI investigation into the Clinton Foundation during the election, the inspector general’s report found.

The IG report said that when McCabe was asked by Comey about the article, he told Comey that he had had not authorized the disclosure and didn’t know who did.

McCabe repeated that lie to agents from the FBI’s Inspection Division and to the Office of the Inspector General when questioned about it. Only in a second round of questioning by the inspector general did McCabe finally admit that he was responsible for the disclosure.

It isn’t just that McCabe lied to investigators, including when he was under oath. The IG also says that McCabe engaged in “misconduct” because the disclosure was “designed to advance his personal interest at the expense of department leadership.”

But the real point is this: lying to a federal agent is a felony under 18 U.S.C. §1001. That is the exact statute under which Special Counsel Robert Mueller – and the Justice Department – prosecuted former National Security Adviser Michael Flynn for lying to FBI agents who interviewed him about conversations he had with the Russian ambassador to the U.S. when Flynn was part of the Trump transition team.

You can violate this law even if you are not under oath at the time you were interviewed – and Flynn wasn’t under oath when he was questioned.

This makes McCabe’s behavior arguably even worse. McCabe was under oath when he was questioned by the IG and, moreover, he held the second-highest post in the most powerful law enforcement agency in the federal government.

McCabe, more than an ordinary citizen, knew the importance of this law and the fact that he had a duty to tell the truth when he was being questioned about unauthorized leaks that could compromise an open law enforcement investigation. To believe he misremembered or temporarily forgot is not credible.

Holding McCabe to account sends a loud and clear message: no one is above the law. If he wasn’t prosecuted, the message would be that the laws that are applied to citizens, politicians and military officers don’t apply to high-ranking FBI agents and the Justice Department.

Not only would that be legally indefensible, but providing that kind of immunity to law enforcement officials would be dangerous. They, even more than the rest of us, must be accountable for their actions and must adhere to both the spirit and the letter of the law. Anything else will inevitably lead to corruption and abuse of power.

McCabe is presumed innocent unless and until proven guilty beyond a reasonable doubt. But charging him is the right thing to do.