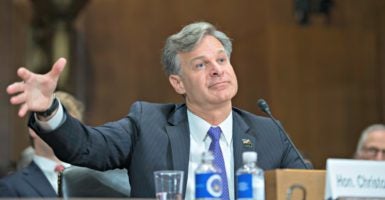 President Donald Trump’s nominee to be the next FBI director said he wasn’t aware of Donald Trump Jr.’s email chain about a Russian lawyer that has consumed the media, but did stress the need for the FBI’s independence.

“I do not consider Director Mueller to be on a witch hunt,” Chris Wray says.

Christopher Wray also told senators Wednesday that he might “dig into” connections between Democrat Hillary Clinton’s presidential campaign and the government of Ukraine.

Republicans and Democrats on the Senate Judiciary Committee alternately used the confirmation hearing to praise and press Wray, 50, a former Justice Department official who went into private law practice. Trump tapped him to replace James Comey, who he fired May 9.

Here are six takeaways from the four-hour hearing:

Sen. Lindsey Graham, R-S.C., read aloud the email exchange between the president’s eldest son and a British publicist about arranging a meeting in June 2016 with a lawyer possibly connected with the Kremlin and claiming to have dirt on Clinton.

Trump was not yet the Republican nominee, nor was Clinton the Democrats’ official choice, as the party nominating conventions had not yet occurred.

Graham asked: “Are you familiar with the email problems of Donald Trump Jr. in the last few days?”

To some surprise in the hearing room, Wray answered: “I am not, Senator. I’ve heard there is an issue. But I’ve spent the last few days meeting with your colleagues, so I missed that.”

Wray went on to say: “I’m hearing for the first time your description of it, so I’m not really in a position to speak to it.”

So Graham went into a somewhat tangled hypothetical.

“Well, let me ask you this. If I got a email from someone that says the Russian government wants to help Lindsey Graham get re-elected, they’ve got dirt on Lindsey Graham’s opponent, should I take that meeting?”

Wray: “Senator, I would think you would want to consult with some good legal advisers before you did that.”

Graham interrupted the likely next FBI director a couple of times.

“Here’s what I want you to tell every politician,” Graham said. “If you get a call from somebody suggesting that a foreign government wants to help you by disparaging your opponent, tell us all to call the FBI.”

Wray moved in that direction, saying:

To the members of this committee, any threat or effort to interfere with our elections from any nation-state or nonstate actor is the kind of thing the FBI would want to know.

2. ‘Happy to Dig Into’ Hillary-Ukraine Connection

Graham also brought up a January report in Politico saying the Ukrainian government sought to sabotage Trump’s candidacy, and worked with the Clinton campaign to do so. Wray said he also had not heard of this story.

Graham: “Would you look into this?”

Wray said the issue is important to him, citing his work in counter espionage at the Justice Department:

If we can’t protect classified information, it’s not just information that gets jeopardized, which we need to risk the lives of intelligence community personnel and all sorts of other compromising situations, but even more importantly, it causes our allies to lose confidence in us in their willingness to share information with us. If those dry up, we’re in a world of hurt. So, I think those should be investigated and prosecuted very severely.

3. Not Ruling Out Support for More Gun Control

An FBI director is responsible for enforcing existing laws, not making them. But Sen. Richard Blumenthal, D-Conn., pressed Wray on whether he would back universal background checks for gun buyers, a proposal Blumenthal has pushed.

“Well, I would want to take a look at any specific legislative proposal and get back to you once I have evaluated any specific piece of legislation,” Wray said. “But I do support efforts to deal with gun violence aggressively and effectively, and I think my record, both as a line prosecutor and in the leadership of the department, is consistent with that.”

“In principle, you would support such measures, you’d want to see the details?” he asked. “But, for example, on universal background checks, you would not rule out supporting a measure?”

Wray made no commitment to backing legislation, but wouldn’t dismiss the matter:

I wouldn’t rule out any commonsense gun reform legislation without having a chance to review it. I would have to review it and make an assessment based on the circumstances. But I can commit to you that being tough on gun violence is something that I would want to be as director of the FBI.

If confirmed, Wray would be coming into the job of FBI director while one of his predecessors, Robert Mueller, is working as a special counsel to investigate Russian meddling in the 2016 presidential campaign.

Wray, who was part of the Justice Department during the George W. Bush administration, said he has worked with Mueller.

“I do not consider Director Mueller to be on a witch hunt,” Wray said, referring to a term Trump uses to describe the probe of possible collusion between Russian officials and his campaign.

Asked more than once whether he believed Russia meddled in the campaign, he responded at one point: “I have no reason to doubt the intelligence community’s assessment.”

He wants the FBI to assist Mueller’s investigation when appropriate, Wray said.

“I’m very committed to supporting Director Mueller in the special counsel investigation in whatever way is appropriate for me to do that,” he said. “I’ve worked closely with Director Mueller in my past government service. I view him as the consummate straight shooter.”

Wray said he could not answer a question on the law governing whether a president could fire a special counsel. But, he said, he opposes any such interference by a president.

“I would consider an effort to tamper with Director Mueller’s investigation to be unacceptable,” he said.

Wray stressed the importance of the FBI being free of any outside tampering.

“No one has asked me for any loyalty oath and I wouldn’t offer one,” he told senators. “As I said, my loyalty is to the Constitution, the rule of law, and the mission of the FBI.”

Sen. Sheldon Whitehouse, D-R.I., asked what Wray would do if the president asked him to do something unlawful or unethical.

Wray responded: “First, I’d try to talk him out of it, and if that fails, I would resign.”

In June, Comey told the Senate Intelligence Committee that after meeting alone once with Trump in the Oval Office, he asked Justice Department officials to help him avoid any future one-on-one meetings.

But Wray said such a meeting between the president and the FBI director should be unusual anyway, after Sen. Richard Durbin, D-Ill., asked him how he’d handle it.

There is a policy that applies between contacts between the White House and department. It goes in both directions. It particularly goes to any contact with respect to a particular case. There obviously are situations where the FBI director needs to be able to communicate with the president on national security matters, for example. But, in my experience, it would be very unusual for there to be any kind of one-on-one meeting between any FBI director and any president.

Sam Nunn, a former Democratic senator from Georgia, provided some bipartisan backing when he introduced Wray, and also stressed the nominee’s integrity and independence.

“If confirmed, I have complete confidence that Chris will follow the facts and the law with fairness, with thoroughness, with intelligence and objectivity wherever that path might lead,” Nunn said.

Nunn noted that both the FBI and Justice Department were crucial during investigations of Watergate, Whitewater, and other scandals. With new questions, Nunn called Wray the right leader.

“Chris Wray is the leader of integrity the bureau needs at this moment,” he said.

A former Justice Department attorney in the George W. Bush administration, John Yoo, reportedly said that Wray might have reviewed the department’s legal memos in 2004 providing a justification for what the administration called enhanced interrogation techniques for terrorism suspects.

Critics of the techniques, which include waterboarding, insist that they constitute torture.

Under questioning from ranking committee member Dianne Feinstein, D-Calif., Wray denied any knowledge of approving the memo and said he opposed torture.

“My view is that torture is wrong. It’s unacceptable, it’s illegal, and I think it’s ineffective,” Wray said.

He noted that when he led the criminal division at the Justice Department, it pursued a successful prosecution of a CIA contractor who went too far in an interrogation.

“To my recollection, I never reviewed, much less provided comment on, or much less approved, any memo from John Yoo or his top aides,” Wray said. “I understand he thinks it’s possible I might have. It’s the kind of thing I think I would remember.”