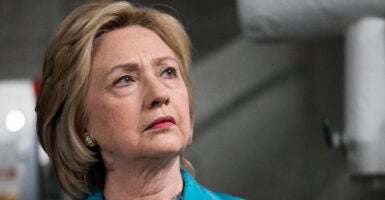 Hillary Clinton is seen here in July 2015, when the FBI was engaged in internal debates over how and when to brief the 2016 Democratic presidential candidate-to-be on what was thought to be attempts by a foreign government to gain influence in her campaign. (Photo: Melina Mara/The Washington Post/Getty Images)

The Senate Judiciary Committee released declassified documents this week that showed a major difference in how the FBI—under the leadership of then-Director James Comey—treated investigations into foreign influence on the presidential campaigns of Hillary Clinton and Donald Trump.

However, the FBI did not provide such a briefing to the Trump team before surveillance of Trump campaign associate Carter Page.

According to the documents, the briefing was provided “so Ms. Clinton could take appropriate action to protect herself.”

However, the special agent in charge of the case complained to Comey that his team “was not being allowed to vigorously investigate this case” involving Clinton and the foreign entity.

The documents include conversations between agents in an unidentified FBI field office and FBI headquarters, including correspondence with Comey.

“These newly released documents indicate that a foreign government was trying to influence the Clinton campaign through a campaign associate, and the FBI was seeking a FISA warrant,” Graham said. “However, the bureau, as it is supposed to do, required that Hillary Clinton be defensively briefed about the matter so she could engage in corrective action.”

The Justice Department’s Office of Legislative Affairs, with a cover letter from Assistant Attorney General Stephen Boyd, provided the documents to the Senate’s Judiciary and Intelligence committees.

The following are three major points from the declassified documents released Sunday. (The names of most FBI officials, and the names of all field offices, are redacted in the documents.)

The first communication was a March 2, 2015, email from an FBI official pressing the need to commence an investigation about a foreign government’s plan to donate to, and lobby, the Clinton campaign.

The goal was to start the probe before Clinton’s expected campaign-kickoff announcement in April.

“To me, this underscores the need for us to push this FISA,” the FBI official wrote, referring to the Foreign Intelligence Surveillance Act, which allows limited surveillance on Americans through a special FISA court approval of a warrant.

“By the time we get it signed and go up, we would only be up a few weeks before she announces, at best,” the official wrote. “On the other hand, if we wait for the events to unfold, which we discussed on the SVTC [secure video teleconference], her announcement may occur in advance of us getting the FISA coverage. That puts us even further behind the curve on the intel necessary for this operation.”

A March 6, 2015, email from an FBI official to a Clinton staffer also noted, “Though the information we received is currently specific to wanting to give money to Clinton and the, thus far, unknown [Republican] candidate, we would like this to be a general defensive brief.”

On March 9, an FBI official emailed colleagues that more clearly stated what the investigation was about.

“I’m writing about [redacted] the [field office] case regarding the [foreign government] and their plans to offer funds to Mrs. Clinton,” the email said. “News reports are pointing towards this announcement happening, either this month or in April.”

Clinton announced her candidacy on April 12, 2015.

Although the country is not identified, there are several possibilities.

However, the 2015 investigation commenced before Trump entered the presidential race.

Russia ended up interfering in the election through hacking and social media buys. While Russia apparently wanted to help Trump and harm Clinton, a special counsel investigation determined that there was not a conspiracy between the Trump campaign and any Russian entity.

Also, one of the FBI messages suggested the country wanted to donate to both Clinton and to her yet-to-be-determined GOP opponent.

The U.S. National Counterintelligence and Security Center recently noted that Russia, China and Iran seek to meddle in the U.S. elections in 2020.

China could be another possibility based on the more distant past. The Chinese government attempted to influence the 1996 election in part through financial donations to the Democratic National Committee during the re-election campaign of President Bill Clinton, the husband of Hillary Clinton, according to a Senate Governmental Affairs Committee report.

The documents say the full investigation was initiated in November 2014, and FBI officials were by March 2015 eager to conduct surveillance of a Clinton associate and provide her a “defensive briefing.” However, it appears the FBI didn’t do that defensive briefing until October 2015.

Just after noon on March 6, 2015, Roger Coe of the FBI’s Counterintelligence Division wrote to FBI official David Archer and at least one other FBI official whose name was redacted that said:

A defensive brief for Clinton’s office should be done (preferably in the next week or so) – The brief does not preclude any other ongoing investigative activity against the target; that should continue.

The reference to “other ongoing investigative activity against the target” was not specific. Through much of 2015 and 2016, Clinton was under FBI investigation for doing government business on an unsecured email server she kept in her home that could be used to engage in communications to avoid the Freedom of Information Act and congressional oversight.

At 4:24 p.m. that same day, an FBI official sent a message to a Clinton staffer in New York. The names of the recipients and sender were redacted. But the message referenced then-FBI Deputy Assistant Director Robert Jones, whose title was subsequently referred to as “DAD.”

“Good afternoon/evening, I hope all is well up in New York. I know I am asking this on Friday afternoon, right before rush hour (something I don’t miss from the Big Apple … the Holland Tunnel), but my Unit down here was asked today by DAD Jones to provide a defensive brief to Hillary Clinton regarding possible foreign aid money that might be contributed to her campaign should/when she announces her run for POTUS,” the message said.

“The DAD would like for us (the FBI) to provide a brief sooner than later (‘a week or so’),” the FBI official said in the message.

“The current thought from my front office is that we will provide to New York the briefing material, if [the New York office] would be able to send out a couple of appropriate individuals to conduct the brief (as well as set it up),” the FBI official wrote. “Right now, the direction we have been given is that it should be Hillary Clinton or someone within her office. An alternate person could be [a Clinton staffer] who appears to function as her spokesman.”

The summary of the briefing, found on page 3 of the PDF of the released documents, indicates the FBI did not brief Clinton until Oct. 15, 2015. The summary was approved by Archer on Oct. 22 that year and states “Full Investigation Initiated: 11/25/2014.”

The special agent in charge of the case had complained in April of that year about being unable to move forward on the matter with a FISA warrant.

[Counsel to H. Clinton] were advised the FBI was providing them with this briefing for awareness and so Ms. Clinton could take appropriate action to protect herself. They were also told the FBI was seeking their assistance to identify other appropriate recipients of the brief, if any.

The summary added that the FBI told the Clinton lawyers: “FBI felt the information was sufficiently reliable and serious that the FBI had a duty to warn.”

Graham, the Judiciary Committee chairman, noted how different it was for the FBI’s investigation of Russian interference to help Trump and harm Clinton in the 2016 campaign.

“When it came to the Trump campaign, there were four counterintelligence investigations opened against Trump campaign associates,” Graham said in a statement. “Not one time was President Trump defensively briefed about the FBI’s concerns.”

Even more egregious, when the FBI gave a generic briefing to the Trump campaign about foreign influence, not only did they fail to mention the specific concerns about Trump associates, they sent an FBI agent into the briefing to monitor President Trump and [retired Gen. Michael] Flynn.

The FBI used the generic briefing as an intelligence-gathering tool, which I believe to be inappropriate and shameful.

This fits a broader pattern of behavior documented in the report last year by Justice Department Inspector General Michael Horowitz on FISA abuse that found FBI officials provided inaccurate information to the FISA court in seeking to spy on Page.

“Given all the stunning revelations of FBI bias compiled by Inspector General Horowitz and others, it is clear to me why there was [a] double standard,” Graham said. “The FBI was not trying to protect the Trump campaign, they were trying to infiltrate the campaign and undermine his presidency.”

On April 14, 2015, the special agent in charge of the Clinton foreign-meddling case took concerns directly to Comey about what seemed like a stalled investigation.

The agent, who was not identified by name in the documents, respectfully told the director in an email, “I hope I am not overstepping in this matter.” The message said that Comey would be getting a briefing the next day about the foreign government and Clinton.

“The FISA application has remained in limbo for the last four months, even though subsequent investigative activity by [redacted] provided additional probable cause for the FISA application,” the agent’s message to Comey said. “[Redacted] is still uncertain as to why the application has not been sent to [the Justice Department] for final approval, although several reasons have been put forth by [the Counterintelligence Division], most recently that the decision to put the application on hold originated ‘on the seventh floor.’”

The “seventh floor” at the FBI refers to the most senior agents at the FBI.

While superficially connected to political candidates, the investigation targets a NONUSPER [non-U.S. person] involved in illegal activity; it does not target the candidate(s), and there is no evidence the candidate is even aware of the potential targeting.

I would like to either see this investigation move forward, or at least get an understanding of why we are not being allowed to move forward.

My team has put a lot of time and effort into this matter, and they don’t understand why they are not being allowed to vigorously investigate this case.

That day, Comey responded to the special agent in charge.

“Don’t know anything about this, but will get smarter,” Comey wrote.

“With respect to the most time-sensitive part: Do you know why this is not included in the briefing for tomorrow?” Comey added. “I finished the read-ahead, which includes a variety of stuff about [foreign government] efforts in the U.S., but didn’t see a mention of this. Why is that?”

This story was updated to note that federal officials recently noted that Iran, China and Russia want to meddle in the 2020 election.