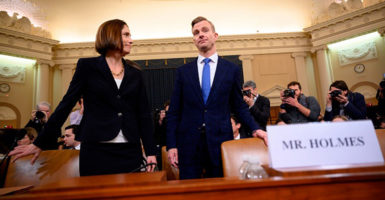 Fiona Hill, a former official with the National Security Council who was Trump’s adviser on Russia, and David Holmes, political counselor to the U.S. Embassy in Ukraine’s capital of Kyiv, testified on the fifth day of public impeachment hearings held by the House Permanent Select Committee on Intelligence.

Here are six highlights from their sworn testimony in the impeachment inquiry that grew out of Trump’s July 25 phone conversation with Ukraine’s new president, Volodymyr Zelenskyy.

Without being asked, Hill opened her testimony by attacking Republican assertions that Ukraine, as well as Russia, meddled in the U.S. presidential election in 2016.

“I refuse to be part of an effort to legitimize an alternate narrative that the Ukrainian government is a U.S. adversary and that Ukraine, not Russia, attacked us in 2016,” Hill told the committee. “These fictions are harmful even if they are deployed for purely political purposes.”

Thus far, Republicans on the committee neither had called Ukraine an adversary nor said only Ukraine and not Russia interfered in the 2016 election.

Politico first reported on an effort by Ukraine government officials and other Ukrainians in a Jan. 11, 2017, story by reporters Kenneth P. Vogel and David Stern.

However, when questioned later in the hearing about the Politico article, Hill acknowledged it and referred to Vogel, now reporting for The New York Times, as “an extremely good journalist.”

She said that certain Ukrainian officials “bet on the wrong horse.”

“They bet on Hillary Clinton winning the election. So, you know, they were trying to curry favor with the Clinton campaign,” Hill said.

Hill said that in contrast to Russia, where the military was involved in meddling in the U.S. election campaign in 2016, Ukraine meddling was conducted by certain officials but was not a top-down operation.

“Many [Ukraine officials] said some pretty disparaging and hateful things about President Trump, and I can’t blame him for feeling aggrieved about that,” Hill said, later adding, “I would also take offense to some of the things that were said if I was the president.”

Early in her testimony, Hill said Russia’s goal in meddling in the 2016 election was to undermine the American presidency, casting doubt no matter who won. Russian President Vladimir Putin’s goal was to cause discord and division between Americans and their political parties, she said, and his efforts largely have succeeded.

“Statements you heard that some on this committee believe that Russia did not conduct a campaign against our country is false,” Wenstrup said. “That’s Mr. Schiff’s narrative, that’s where you heard it. We did a whole report on it. We agreed that Russia has done this since the Soviet Union, and they’ve actually gotten better at it.”

Wenstrup also asked why Democrats did not honor Republicans’ request to subpoena the testimony of Alexandra Chalupa, a one-time operative for the Democratic National Committee. Politico reported that Chalupa worked with Ukrainian officials against Trump.

“At the same time, certain Ukrainians did work against President Trump, some with the DNC,” Wenstrup said. “If that is ‘debunked,’ why has Mr. Schiff denied DNC operative Alexandra Chalupa [to] come forward and debunk it?”

Hill testified that she initially was angry with Gordon Sondland, ambassador to the European Union, for not sharing information with her.

Trump had tasked Sondland and two other officials with working on Ukraine matters in coordination with former New York Mayor Rudy Giuliani, one of the president’s personal lawyers.

When she confronted Sondland, Hill testified, she learned that his actions were based on a “political errand” for the Trump administration.

Sondland appeared Wednesday before the committee for about six hours.

“We have a robust interagency process that deals with Ukraine so it includes Mr. Holmes, it includes Ambassador Taylor, it includes a whole load of other people,” Hill testified, referring to the day’s other witness and to William Taylor, acting U.S. ambassador to Ukraine.

“But it struck me yesterday when you put upon the screen Ambassador Sondland’s emails and who was on these emails and [he] said these are the people you need to know, and he was absolutely right because he was being involved in a domestic political errand and we were being involved in national security foreign policy. And those two things had just diverged.”

Holmes testified that his understanding was that $391 million in congressionally approved U.S. military assistance to Ukraine was contingent on investigations. The administration put a hold on the aid for 55 days, from July till September, apparently without officially notifying Zelenskyy.

“By this point my clear impression was that the security assistance hold was likely intended by the president either as an expression of dissatisfaction that the Ukrainians had not yet agreed to the Burisma/Biden investigation or as an effort to increase the pressure on them to do so,” Holmes testified.

Holmes seemed to believe that Trump was directly involved in pushing Ukraine to investigate the actions of the former vice president and his son, Hunter Biden, who held a lucrative position on the board of the Ukrainian energy company Burisma while his father was assigned to work on Ukraine matters by then-President Barack Obama.

That effort altered the workings of the U.S. Embassy in Ukraine, Holmes told lawmakers.

“Specifically, three priorities of security, economy, and justice and our support for Ukrainian democratic resistance to Russian aggression became overshadowed by a political agenda being promoted by former New York City Mayor Rudy Giuliani and a cadre of officials operating with a direct channel to the White House,” Holmes told the committee.

He referred to the “three amigos”—Sondland plus Kurt Volker, then a special envoy to Ukraine, and Energy Secretary Rick Perry, the former governor of Texas—who he said were promoting a Ukraine investigation into Burisma and the Bidens.

Holmes recalled a conversation between Sondland and Taylor, the acting ambassador to Ukraine.

“On June 27, Ambassador Sondland told Ambassador Taylor that President Zelenskyy needed to make clear to President Trump [that he] was not standing in the way of quote, ‘investigations,’” Holmes testified, adding:

I understood that this meant buy-in for Burisma investigations that Mr. Giuliani and his associates had been speaking about in the media since March. While Ambassador Taylor did not brief me on every detail with the ‘three amigos,’ he did tell me that on a June 28 call with President Zelenskyy, Ambassador Taylor, and the ‘three amigos,’ it was made clear that some action on a Burisma-Biden investigation was [a] precondition for an Oval Office visit.

Democratic counsel Daniel Goldman noted that two members of the “three amigos,” Sondland and Volker, testified this week that they didn’t immediately see a correlation between a probe of corruption at Burisma and a probe of the Bidens.

“Dr. Hill, was it apparent to you that when President Trump, Rudy Giuliani, or anyone else was pushing for an investigation into Burisma, that the reason why they wanted that investigation related to what President Trump said here, the Bidens?” Goldman asked, referring to the portion of the Trump-Zelenskyy phone call where the president mentioned the Bidens.

Hill responded: “It was very apparent to me that was what Rudy Giuliani intended, yes. He said this publicly, repeatedly.”

Goldman, turning to the other witness: “Mr. Holmes, you understood that Burisma was code for the Bidens?”

Goldman: “And do you think anyone involved in Ukraine matters would understand that as well?”

4.  Trump Call ‘Quite Loud, Quite Distinctive’

The committee called Holmes as a witness in large part because he remembered overhearing a July 26 phone call Sondland made to Trump while Holmes, Sondland, and two staff members were at a restaurant in Kyiv, Ukraine.

Holmes said he had “firsthand knowledge” of an interaction between Sondland and Trump, and considered the call a “touchstone moment.” He testified:

Goldman, the Democratic counsel, asked Holmes whether he could hear the conversation.

Holmes replied: “The first part of the conversation.”

Goldman asked whether Goldman heard Trump say, “Is he going to do the investigation?”

Holmes responded that Sondland said, “Oh yeah. He’s going to do it. He’ll do anything you ask.”

Holmes recalled that Trump quickly switched to the subject of American rapper A$AP Rocky, at the time held in a Swedish jail. He testified that Sondland told the president that the rapper should have pleaded guilty.

Goldman asked, “What did Ambassador Sondland say to you?”

Goldman: “Did he use slightly more colorful language than that?”

Goldman: “What did he say [Trump] does care about?”

“I asked him, what kind of big stuff?” Holmes recalled. “We have big stuff going on here, like the war with Russia. He [Sondland] said, ‘No, big stuff like the Biden investigation.’”

During the hearing, Trump fired off a tweet challenging the premise that it was even possible to overhear a phone conversation verbatim.

“I have been watching people making phone calls my entire life. My hearing is, and has been, great,” Trump tweeted. “Never have I been watching a person making a call, which was not on speakerphone, and been able to hear or understand a conversation. I’ve even tried, but to no avail. Try it live!”

Hill, who worked on the National Security Council, told the committee that her one-time boss, national security adviser John Bolton, was not happy about Giuliani’s actions regarding Ukraine.

Hill testified that she talked to Bolton about what she considered a “smear” campaign against Marie Yovanovitch, the U.S. ambassador to Ukraine who was recalled and reassigned six months ago. (Yovanovitch, who now teaches at Georgetown University while still employed at the State Department, flew back to the U.S. on the day of Zelenskyy’s inauguration.)

“It was part of a conversation [with Bolton] about the things Mr. Giuliani was saying in public. And we saw them often, we saw him often on television making these statements,” Hill told the committee. “I had also brought to Ambassador Bolton’s attention the attacks and the smear campaign against Ambassador Yovanovitch, and expressed great regret about how this was unfolding and in fact the shameful way in which Ambassador Yovanovitch was being smeared.”

Goldman asked, “Did you understand what he meant by that?”

Hill replied that it was clear.

“Obviously what Mr. Giuliani was saying was pretty explosive, in any case,” she said. “He was frequently on television making quite incendiary remarks about everyone involved in this, and was clearly pushing forward issues and ideas that would, you know, come back to haunt us. In fact, I think that’s where we are today.”

6. ‘Stops and Starts’ in Foreign Aid

Republican counsel Steve Castor appeared to try to cast doubt on the narrative that the administration’s delay in delivering the military aid to Ukraine was based on the president’s pushing investigations on Zelenskyy.

Zelenskyy has said repeatedly that he didn’t feel pressured by Trump.

“Is it fair to say … stops and starts in aid like this sometimes do happen?” Castor asked.

Castor: “I believe you testified there was a freeze put on all kinds of aid and assistance because it was placed in a process of significant reviews of foreign assistance going on?”