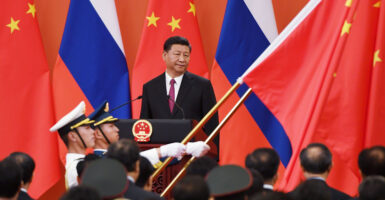 Chinese President Xi Jinping looks on as Chinese soldiers carry the Chinese flag during a medal presentation ceremony in the Great Hall of the People in Beijing on June 8, 2018. (Photo: Greg Baker/AFP/Getty Images)

Also, on Friday, William Evanina, director of the National Counterintelligence and Security Center, issued a public statement with details of how China, Russia and Iran were targeting the U.S. elections.

Wray’s briefing also came as the Chinese state-owned TikTok, an increasingly popular social media app believed to be a potential tool in election interference, not only faces a U.S. ban but may be sold to Microsoft or another American company.

Experts say China would not be able to change votes cast by Americans. But this could be cyberwarfare that the United States might not be prepared for, and could create chaos and lack of trust in the integrity of the election results.

1. How Would China’s Meddling Compare to Russia’s?

“Cyber is certainly the strongest lever to turn, manipulation on social media, it all falls under the umbrella of information warfare,” Greg Barbaccia, a former Army intelligence sergeant with expertise in counterintelligence, insider threats, and corporate espionage, told The Daily Signal.

But the hacking threat could be increased, Barbaccia said.

“With the Equifax hack, China accessed information on 145 million people,” he said.

The social media companies vulnerable in the 2016 election campaign will be more prepared, he said.

“Facebook has a huge interest in countering interference this time around,” Barbaccia said. “They know their own reputation is on the line.”

It’s somewhat difficult to compare Russia and China in election meddling, said Karla Mastracchio, a former intelligence analyst who continues to do consulting work for the Defense Department in the areas of communication and influence.

“Russia and China have different capabilities,” Mastracchio, also an adjunct professor in the department of journalism at the University of Iowa, told The Daily Signal. “It’s like two high school bullies. One is big and strong. The other is really smart. Both could make your life miserable.”

She said Russia and China both are good at developing “deep fakes,” or videos that look real, which are more compelling than the false news stories that Russia pushed on Facebook in 2016.

“A deep fake is not just good technology but technology tied to the culture to become believable,” Mastracchio said. “Deep fakes look for things that validate people’s beliefs.”

She noted that China has enough business ties with the United States and other regions of the world that it can obtain an understanding of the culture—political and otherwise—for effective PR messaging.

“We should stop thinking about countries as border-bound and think about their digital footprint,” Mastracchio said. “China has a huge digital footprint in the Middle East, Africa, and Latin America as well as the United States.”

Hans von Spakovsky, a senior legal fellow with The Heritage Foundation, said China is clearly more of a threat than Russia. He cited the hack of the U.S. Office of Personnel Management, in which China accessed information on all federal employees.

“Folks who were so worried about Russian interference should realize China is a bigger threat,” von Spakovsky said. “The OPM hack was the biggest data breach in the federal government’s history. If they wanted to cause trouble, they could.”

As was the case with Russia, experts say, China can’t change vote tallies.

Chinese entities could hack voter information and try to cast phony votes, or raise questions about individual voters to cast doubt on the integrity of the election, Barbaccia said. This wouldn’t alter outcomes, but could cause some Americans to lose faith in elections.

“Sowing discord is their No. 1 goal,” Barbaccia, the former Army intelligence officer, said of Chinese government officials. “It’s probably a tossup for them as to which candidate sows the most discord.”

The easy targets would include voter registration information that is public.

“Local county voter registration databases would be vulnerable,” he said. “Also, political donors, who are 100% likely to vote, would be valuable information.”

Mastracchio agreed that the goal was discord.

“They want to disrupt and steal information and shut down infrastructure and software,” Mastracchio said. “They’re not so much picking a side as they are creating a disruption.”

She warned that the U.S. government’s information warfare hasn’t caught up with China—and may not ever.

“The hackers in China are a couple of years ahead of us,” Mastracchio said. “They don’t play by the same rules and we may never catch up. We follow a set of rules on information warfare. So we have arguably a moral and ethical advantage, but not an advantage when it comes to an attack.”

Not surprisingly, the Chinese government denies any plans to interfere in the U.S. election in November, even though U.S. intelligence agencies concluded that China meddled in the 2016 and 2018 campaigns.

One Chinese government official said his country is “not interested” in election interference.

“We have reiterated many times that the U.S. election is the U.S.’ own internal affair. China is not interested in interfering,” China Foreign Ministry spokesman Geng Shuang said, according to Voice of America. “At the same time, we hope the people of the U.S. will not drag China into its electoral politics.”

U.S. intelligence agencies determined that Chinese hackers meddled in both the 2016 and 2018 elections, and say China-allied hackers have begun “spear-phishing” attacks on American political targets before the 2020 election, Voice of America reported.

The FBI’s Wray and other national security officials have told members of Congress that China is working to interfere with local U.S. election systems, Axios reported.

“They could hack the state voter registration database as another way to screw up elections,” von Spakovsky, also a former Justice Department lawyer and member of the Federal Election Commission, told The Daily Signal.

This could be a particular problem with all-mail voting in some jurisdictions.

If a foreign spy operation wanted to create mass chaos and long delays in the U.S. election process, von Spakovsky said, then voter registration rolls are easily obtainable in most states.

Nonprofits frequently obtain such lists. China, Russia, or another foreign entity could establish a “dummy nonprofit” with a nonpartisan voter registration website, he said.

Short of this, foreign governments could hack into voter registration information to get names. The dummy entity could send out counterfeit ballots based on official sample ballots to registered voters or to selected voters in certain geographic or demographic areas, von Spakovsky said. Or, the entity could just forge ballots and submit them.

Local election officials may be likely to spot the fraudulent ballots, he said. But it could create confusion when voters get more than one absentee ballot, the real one and a counterfeit.

This could cause disenfranchisement if voters either submit both ballots, creating suspicion among election officials, or submit the counterfeit ballot and not the real one. A counterfeit ballot couldn’t be read by an optical scanner.

“Depending on how good the counterfeiting/forging operation is, the spy agency might be able to get a certain percentage of its fraudulent ballots accepted as real votes,” von Spakovsky said in an email to The Daily Signal. “But even just causing chaos and confusion, damaging the confidence of the public in the integrity of the outcome, would probably be a worthwhile objective for foreign adversaries.”

Mastracchio said she wasn’t aware of a way that balloting could be affected, but that the Chinese could promote a narrative around this point on social media and other areas.

“I can see an information campaign to exploit the anxieties about mail-in balloting,” she said. “They could flood Facebook and Twitter demanding protesting in the streets to demand in-person voting.”