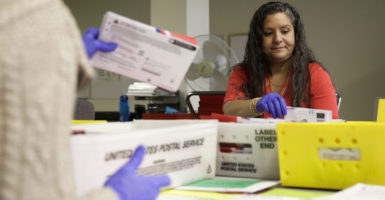 Mandatory voting by mail would undermine election security and endanger Americans’ right to have their votes counted, according to a report released Tuesday by the Honest Elections Project, a voter integrity group.

The report comes on the heels of a vote-by-mail scandal in Paterson, New Jersey, where 1 in 5 votes were disqualified.

Measures proposed at the federal and state level would legalize vote harvesting, which is the practice of allowing political operatives to collect absentee ballots and be present while a voter casts his or her vote. Many of the proposals would undermine voter ID laws and federalize significant portions of election administration.

Concurrently, some liberal advocacy groups are filing dozens of lawsuits to invalidate election laws based on the threat of COVID-19. But these groups were opposed to election security measures before the pandemic, the report notes.

All-mail voting is different from absentee voting, which requires an individual voter to take action and includes several security measures. In an all-mail system, ballots automatically are mailed out to postal addresses with fewer security safeguards.

Remote voting, including by absentee ballot, has been the largest source of voter fraud over the decades, analysts say.

The states of Nevada, New Jersey, and Maryland also have had problems with mailing ballots automatically, as many ballots were undeliverable. In Maryland, 10% of ballots could not be delivered.

At the very least, mailing ballots to every registration on file—knowing that a significant number of registrations are erroneous or outdated—is a waste of precious resources. Clark County, Nevada, estimated it would cost at least $323,000 to mail ballots to inactive registrants. Now, undeliverable ballots are being dumped in garbage cans. Taxpayers’ dollars are literally being thrown away because of ill-conceived vote-by-mail schemes.

Washington has a statewide mail-only voting system, but it took a decade to establish gradually, the report says. That’s in contrast to the demands of advocacy groups that want an all-mail system for the presidential election Nov. 3—less than four months away.

The report from the Honest Elections Project cites Washington Secretary of State Kim Wyman as saying, “You can’t just flip a switch” to transition to a new system.

In one example, Hector Ramirez, a candidate for the New York State Assembly in 2014, was found guilty of fraud after he filled out 35 ballots for himself.

In 2016, the Democratic primary for a Missouri state legislative seat was overturned after it became clear that improper absentee votes had affected the results.

The next year, about 700 forged mail-in ballots were submitted for a Dallas City Council race. Most notably, in the 2018 race in North Carolina’s 9th Congressional District, prosecutors said an operative working for the Republican candidate ran a vote-harvesting operation that illegally altered or destroyed hundreds of ballots.