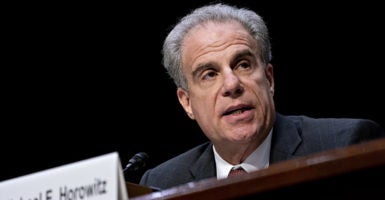 Michael Horowitz, inspector general for the Justice Department, testifies Wednesday about his report on the FBI's early investigation of the Trump campaign during a Senate Judiciary Committee hearing. (Photo: Andrew Harrer/Bloomberg/Getty Images)

The Justice Department’s inspector general, appearing Wednesday before a Senate committee, explained his findings of 17 inaccuracies and omissions by FBI agents in seeking a secret court’s approval to spy on a Trump campaign aide.

That initial warrant to conduct electronic surveillance on Page kicked off more than two years of investigations of a connection between the Donald Trump campaign and Russia’s efforts to influence the 2016 presidential election. Special counsel Robert Mueller eventually determined in his final report, released in April, that no one in the Trump campaign collaborated with Moscow.

The inspector general’s report, however, concludes that there was no “documentary or testimonial evidence” that FBI agents and officials acted with political bias in using unverified and salacious information about Trump compiled by former British spy Christopher Steele as the basis for the first FISA warrant targeting Page, as well as three applications to continue the FBI’s spying.

The so-called Steele dossier was funded by Hillary Clinton’s 2016 presidential campaign and the Democratic National Committee.

During the hearing before the Senate Judiciary Committee, Horowitz offered a skeptical view about what he called “inexplicable” conduct by the FBI.

“I think it’s hard to look at all 17 of these events and conclude it was complete incompetence,” Horowitz said to the committee toward the end of his testimony, referring to the errors.

Horowitz also told the committee that he referred the actions of the “entire chain of command” in the FISA warrant process for review by supervisors, “for consideration of how to assess and address their performance failures.”

Here are six big takeaways from the inspector general’s testimony, during which Democrats emphasized his finding of no political bias.

Senate Judiciary Chairman Lindsey Graham, R-S.C., asked Horowitz: “Christopher Steele, is it fair to say that he had a political bias against Donald Trump?”

Horowitz said the fact that the Clinton campaign and the Democratic National Committee paid for Steele’s work showed that, with regards to the information, “there was a bias that should have been disclosed to the court.”

Graham: “Does it seem that [Steele] personally had a bias, not just because he was on the payroll of the Democratic Party?”

Horowitz, referring to Bruce Ohr, a high-ranking Justice Department official: “Well, we found in the course of this and heard from Mr. Ohr, from his comment to him, that [Steele] was desperate to prevent Mr. Trump’s election.”

Graham, who at one point waved Steele’s research at the audience, summed up the view.

“Again, this is the guy that provides the dossier that gets the warrant over the top for Carter Page. He’s paid for by the Democratic Party,” Graham said. “And he personally believes it’s bad for Donald Trump to win. He’s marketing the dossier, which is a bunch of garbage to anybody and everybody.”

2. FISA Warrant Application Was Based ‘Entirely’ on Steele Dossier

At two points when talking about the Steele dossier, Horowitz made clear that the document was either “essential” or “entirely” the basis for the FISA warrant.

The Crossfire Hurricane team obtained information from Steele’s primary subsource in January 2017 that raised significant questions about the reliability of the Steele reporting. This was particularly noteworthy because the FISA applications relied entirely on information from the primary subsource’s reporting to support the allegation that Page was cooperating with the Russian government on 2016 U.S. election activities. However, the FBI did not share this information with [Justice] Department lawyers, and it was therefore omitted from the last two renewal applications [for warrants to spy on Page].

At another point, Horowitz elaborated that FBI and Justice Department officials told his investigators that “the Steele report pushed the FISA over the line” to establish probable cause for the surveillance of Page.

“We concluded that the Steele reporting played a central and essential role in the decision to seek a FISA order,” Horowitz said. “FBI leadership supported relying on Steele’s reporting to seek a FISA order after being advised of concerns expressed by a department attorney that Steele may have been hired by someone working for a rival candidate or campaign.”

The IG report criticizes how the FBI handled the Steele dossier even after discovering some of the information in it was inaccurate.

“In January 2017, when they figure out the primary subsource and they talk to the Russian guy that provided Steele all of the information, what should the FBI have done at that moment?” Graham asked.

Horowitz responded: “Two things. Reconsidered internally where things stood and, most importantly, told the lawyers at the Justice Department who they were asking to help them get a FISA.”

Graham asked whether FBI agents had a duty to report to their supervisors, and eventually to the secret FISA court, exculpatory information—that is, evidence that tends to show a suspect is not guilty of a crime.

Horowitz responded that the FBI agents “absolutely” had a duty to report such information, but did not.

Horowitz: “That’s the question I can’t specifically answer for you.”

Graham: “Can you say it wasn’t because of political bias?”

Horowitz: “Decisions regarding those FISA matters, I do not know their state of mind.”

Later in the hearing, Sen. Mike Lee, R-Utah, called it “crazy” that former FBI Director James Comey, the media, or anyone else would view the scathing IG report as an exoneration of the FBI.

He doesn’t agree with the conclusion of no political bias, Lee added.

“We are faced with two possibilities,” Lee said. “Either one, these FBI agents purposefully used the power of the federal government to wage a political war against a presidential candidate they despised. Or two, these agents were so incompetent that they allowed a paid foreign political operative to weaponize the FISA program into a spying operation on a rival presidential political campaign. I’m not sure which one is worse.”

Horowtiz didn’t object to the characterization, and noted the FBI agents involved were at a senior level:

On the FISA side, we found as you noted, a lack of documentary evidence about intentionality. We also noted the lack of satisfactory explanations and, in fact, leave open the possibility that for the reasons you indicated, it’s unclear what the motivations were. On the one hand, gross incompetence, negligence. On the other hand, intentionality. And where in between, we weren’t in a position to—with the evidence we had—to make that conclusion. I’m not ruling it out.

4. What About FBI Bias Against Hillary Clinton?

Sen. Patrick Leahy, D-Vt., noted that bias wasn’t only toward Trump and his campaign.

“You also did in your investigation, didn’t you find pro-Trump, favorable Trump text messages from [FBI] agents who worked on the Russia investigation, including one that was an expletive-ridden exchange where agents were enthusiastically talking about Trump’s election and their desire to investigate the Clinton Foundation under President Trump. You found that too, didn’t you?” Leahy said.

Leahy followed: “It’s potentially problematic whether they are pro-Trump or pro-Clinton. I assume FBI investigators can have strong views on politics. But the question is, does it impact their work?”

Exactly right. I think it’s very important to keep in mind that while frankly, they never should be using their government devices to have political discussions, whether they are working on a sensitive campaign or a sensitive matter or not. When we took this last year, we laid it out. We were not referring people for performance failures simply because of support or lack of support for a candidate. It was precisely as you indicated: connecting it to their activity.”

Sen. Dick Durbin, D-Ill., was among the committee Democrats who brought up the point again.

“On page 339 of your report, you also found agents at the FBI who had [the] exactly opposite political viewpoint and were very positive toward candidate Trump and very open in their use of expletives to demonstrate that,” Durbin said.

But Horowitz clarified that those agents weren’t part of the effort to get a FISA warrant to surveil Carter Page.

Comey, who supported the FISA warrants as FBI director, wrote an op-ed spinning the IG report in his favor that was published Monday in The Washington Post with the headline “The Truth is Finally Out: The FBI Fulfilled Its Mission.”

Horowitz, however, largely shot down Comey’s spin during his testimony.

“On Monday, we learned from a report by the Justice Department’s inspector general, Michael Horowitz, that the allegation of a criminal conspiracy was nonsense,” Comey wrote. “There was no illegal wiretapping, there were no informants inserted into the campaign, there was no ‘spying’ on the Trump campaign.”

“I think the activities we found here don’t vidicate anybody who touched this,” Horowitz said in response to a question from Graham.

“The Inspector General’s report now makes clear that the FBI launched an intrusive investigation of a U.S. presidential campaign on the thinnest of suspicions that, in my view, were insufficient to justify the steps taken,” Barr said in the statement, adding, “The Inspector General found the explanations given for these actions unsatisfactory.”

Sen. Richard Blumenthal, D-Conn., was among Democrats who characterized Barr’s statement as an “attack” on the IG report.

“Did you show this report to Attorney General Barr before it was released?” Blumenthal asked.

The inspector general responded, “As standard process, we provide this to the attorney general and the FBI director.”

Blumenthal: “Did he suggest any changes?”

Horowitz: “He didn’t suggest any changes.”

Blumenthal appeared disappointed, and asked: “He didn’t suggest any corrections?”

Horowitz: “He found a few typos.”

“So, you must have been surprised by his attack on you and your team,” Blumenthal said.

Horowitz: “No. I had some idea he wasn’t completely supportive of that.”

He knows an inspector general is not always going to be popular, Horowitz added.

“He’s the attorney general of the United States,” Horowitz said of Barr. “I’ve had cases and situations where there have been disagreements between myself and leadership.”

Blumenthal by this point appeared frustrated.

“I want to give you a chance to defend yourself and your team who have done a highly professional job here, 19 months, hundreds of witnesses, hard work,” Blumenthal said. “Do you think this attack on you and your team is fair?”

Horowitz responded: “My defense of my team and our work is that we stand by the report. Nothing I’ve heard changes our view.”