Fact-Checking 4 Claims About Detaining Children at the Border 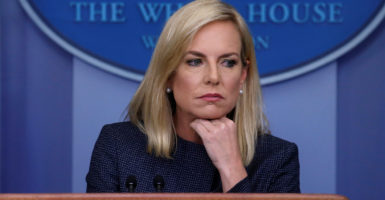 "We give them meals and we give them education and we give them medical care," Homeland Security Secretary Kirstjen Nielsen tells reporters Monday, referring to detained children during the daily briefing at the White House. (Photo: Leah Millis/Reuters/Newscom)

Editor’s note: Since this article was first published, President Donald Trump signed an executive order addressing the issue of children at the border.

The Trump administration is taking heat from Democrats and Republicans for separating parents and children after they illegally crossed the southern border.

Over the six weeks from April 19 through May 31, federal officials separated about 2,000 children from their families at the U.S.-Mexican border, the Associated Press reported last week.

President Donald Trump blamed the procedure on Democrats in Congress.

During the White House press briefing Monday, Homeland Security Secretary Kirstjen Nielsen said: “This is a very serious issue that has resulted after years and years of Congress not taking action.”

Here’s a look at four of the more questionable claims made about the enforcement action.

“The Democrats forced that law upon our nation,” Trump asserted last week.

Democrats, backed by some media commentators, counter that it’s not the law but a Trump administration policy.

Actually, experts say, the situation is a combination of a bipartisan law and a Clinton administration policy.

In 1997, the Clinton administration entered into something called the Flores Settlement Agreement, which ended a class action lawsuit first brought in the 1980s.

In a separate development, in 2008 the Democrat-controlled Congress approved bipartisan legislation to combat human trafficking and President George W. Bush, a Republican, signed it into law.

Section 235 (g) in that law, the William Wilberforce Trafficking Victims Protection Reauthorization Act, states that unaccompanied minors entering the United States must be transferred to the custody of the Department of Health and Human Services Office of Refugee Resettlement rather than to the Department of Homeland Security.

For consistency between the provision of the anti-trafficking law and the 9th Circuit’s interpretation of the Flores agreement, children who came into the country illegally with parents had to be taken into HHS custody, said Art Arthur, former general counsel for Immigration and Naturalization Services (now known as Immigration and Customs Enforcement) as well as a former federal immigration judge.

“As soon as their parents are detained, the children are classified as unaccompanied,” Arthur, now a resident fellow for law and policy at the Center for Immigration Studies, told The Daily Signal.

Some media outlets have called the practice of separating children from parents at the border “unprecedented” or a “new low” for the United States.

What’s different under the Trump administration, though, is a “zero tolerance” approach to enforcing existing immigration laws and policy.

On May 7 in Scottsdale, Arizona, Attorney General Jeff Sessions directed federal prosecutors to prosecute all adults who illegally enter the country, including those accompanied by their children, under a provision of federal law (8 U.S.C. § 1325(a)) that covers illegal entry.

“If you’re smuggling a child, then we’re going to prosecute you, and that child will be separated from you, probably, as required by law,” Sessions said. “If you don’t want your child separated, then don’t bring them across the border illegally. It’s not our fault that somebody does that.”

Since it takes more than 20 days to adjudicate an asylum claim, the 9th Circuit’s interpretation of the Flores Settlement Agreement essentially provides three options, said David Inserra, a homeland security policy analyst for The Heritage Foundation.

“The Trump administration currently faces two options: Either release every family that crosses the border and claims asylum and know that most of them will never show up at their immigration court hearing; or release the child as required by the 9th Circuit Court of Appeals’ interpretation of the Flores settlement while holding the parents while awaiting trial,” Inserra told The Daily Signal.

“A third, better solution is to fix the loophole created by the 9th Circuit with regard to Flores and improve the asylum process to discourage frivolous asylum claims, while also better serving those with legitimate asylum cases,” Inserra added.

“This would mean only a brief period of separation while the parents are prosecuted,” Arthur said.

Depending on the outcome, the family would be reunited and either be released or deported together.

Much of the criticism of separating children from parents at the border has been from Democrats.

However, former CIA Director Michael Hayden, who served under President George W. Bush, and former Republican National Committee Chairman Michael Steele, who was once lieutenant governor of Maryland, both compared the practice to Nazi concentration camps.

The Department of Homeland Security rejected the comparison, noting that most children caught crossing the border illegally are not detained by federal officials.

In the last fiscal year, 90 percent of apprehended children were released to a sponsor who was either a parent or close relative, according to the department.

Homeland security officials also say they work with HHS to improve and ease communication between detained parents and their children in HHS care.

Sponsors may be “a parent, adult sibling, relative, or appropriate home that meets criteria for the safety of the child and continuation of any immigration proceedings,” according to DHS. Also, a parent who is prosecuted and later released can be a sponsor and ask HHS to restore custody of the child.

Immigration and Customs Enforcement has dedicated a facility to operate primarily as a family reunification and removal center. ICE staff who interact with parents will receive training in trauma-informed care, and the agency will assign staff trained in mental health care to detained parents who have been separated from children, according to DHS.

CNN reported last week on an illegal immigrant from Honduras who claimed her nursing daughter was pulled away from her before she was handcuffed. CNN cited a lawyer from a liberal legal group called the Texas Civil Rights Project.

In a conference call with reporters last week, a senior Department of Homeland Security official said this was not the case.

“We do not separate breastfeeding children from their parents. That does not exist. That is not a policy. That is not something that DHS does,” an official told reporters Friday. “We believe that that is false.”

An estimated 14,500 to 17,500 individuals are smuggled into the United States each year. For perspective, that number constitutes about 5.7 percent of total apprehensions of illegal immigrants in 2017, though apprehensions don’t account for all border crossings.