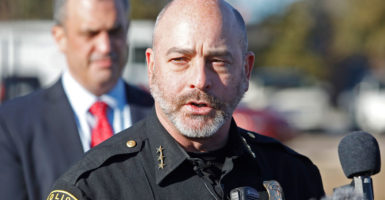 The same weekend that Orthodox Jews in Monsey, New York, were fighting off another knife-wielding anti-Semite thug with chairs and coffee tables—they were fortunate the perpetrator hadn’t brought a firearm, like the killer who targeted a yeshiva in Jersey City only a few weeks earlier—Jack Wilson, a 71-year-old congregant and security volunteer at West Freeway Church of Christ in White Settlement, Texas, took mere seconds to stop a potential mass murderer.

Earlier in the year, to the dismay of the usual suspects, Texas Gov. Greg Abbott had signed a bill making it explicitly legal for Texans with concealed carry licenses to bring their weapons into places of worship.

These kinds of protections allowed Wilson to achieve something that no gun laws now being pursued nationally by Democrats has ever accomplished: He stopped a mass shooter.

My guess is that Wilson, a former deputy sheriff, is the kind of guy who probably wouldn’t have broken the law and carried a firearm into church had it been illegal to do so. The killer, on the other hand, I’m wholly certain, would have been undeterred by any laws.

Yet allowing people who pass ongoing criminal background checks and take state-mandated training courses to bring their guns to a church or a school is a move that generates tremendous hostility among gun control advocates.

We must “do something” about gun violence, but we’ve learned that, in the liberal vernacular, that’s nothing more than a euphemism for “do something to inhibit law-abiding citizens from owning guns.”

Even when Abbott signed the law that clarified the right of people to enter churches with concealed firearms unless otherwise prohibited, it was framed as something nefarious by the media.

“Texas loosens firearm laws hours after the state’s latest mass shooting left five dead,” one CNN piece noted after the Walmart shooting in El Paso in September, as if clarifying the constitutional right to protect oneself from bigoted killers is somehow helping the bigoted killers.

Former Vice President Joe Biden called the Texas law “irrational.” Now, if you don’t believe that trained and licensed safety-conscious Americans should be allowed to protect themselves, their community, and their family in a place of worship, then you’re not a moderate. You just don’t believe in the Second Amendment or the right to self-defense—what John Adams, quoting Blackstone, referred to as “the primary canon in the law of nature.”

There is, of course, no panacea for the problem of deranged people shooting up churches and schools. The argument, however, that guns rarely stop these events is highly misleading when one considers that most high-profile mass shootings happen in gun-free zones, and concealed carriers are some of the most law-abiding citizens in the country.

It is also impossible to quantify how often the presence of good guys with guns dissuades murders. Shooters prefer soft targets.

We also know that while having a gun in the hands of a citizen may not stop most murderers, it can sometimes mitigate the damage they inflict.

Two incidents come to mind: the shooting at First Baptist Church of Sutherland Springs, Texas, where Stephen Willeford grabbed his AR-15 and shot the mass killer before he could do more damage, and the case of Jeanne Assam, a congregant security volunteer at New Life Church in Colorado Springs, who, in 2007, dropped a murderer who had already killed four people in two churches.

While the chances of being caught up in a mass shooting, despite what you may have heard, are incredibly rare, there is virtually no downside in allowing congregations to govern their own security. No one is forcing a church to arm itself.

The Mormon Church, for instance, has banned firearms from all its places of worship. Yet some states are compelling millions of Americans to sit there defenseless.

In New York, where Orthodox Jews increasingly have become the target of violence, there are no Assams or Willefords or Wilsons allowed. Draconian laws make it virtually impossible for normal people to practice their right to self-defense.

Using history as a precedent, Jews should find this kind of limitation especially offensive. One of the greatest triumphs of the state of Israel, and the chief reason so many anti-Semites detest it with such ferocity, is that Jews finally stopped asking for permission to exist and picked up guns to defend themselves. The United States is perhaps the only other place in the world where Jews are also blessed—or should be—with an inherent right to self-protection.

It was the great Zionist Ze’ev Jabotinsky who implored his people to arm in the early 20th century. “Better to have a gun and not need it than to need it and not have it” was one of his slogans.

This notion was once widely embraced in the United States. Apparently, it still is in Texas.