Democrat Takes the First Steps Toward a Trump Impeachment 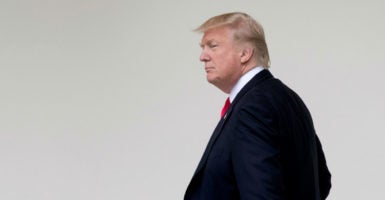 “Obstruction of justice by the president is the problem," Rep. Al Green says of President Donald Trump, pictured above. (Photo: Michael Reynolds/EPA/Newscom)

The representative asserted that the president obstructed justice by firing former FBI Director James Comey in May. Other Democrats, like California Rep. Maxine Waters and House Minority Leader Nancy Pelosi, joined in the call for Trump’s impeachment, but Green was the only member of Congress to call for the beginning of impeachment proceedings on the House floor.

“Obstruction of justice by the president is the problem,” Green said in an official statement late Tuesday. “Impeachment by Congress is the solution.”

The president cited the attorney general’s recommendation when he officially terminated Comey May 9. The move prompted Democratic leadership to call for a special investigator to look into its claims that members of the Trump campaign improperly colluded with members of the Russian leadership to ensure that he won the 2016 presidential election.

Phillip Stucky is a reporter for The Daily Caller News Foundation.