4 Keys to Understanding a Trump Impeachment Trial in the Senate 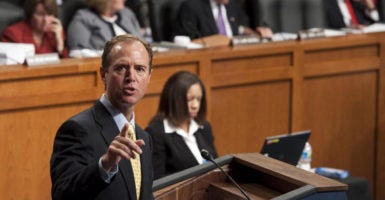 The focus of impeachment is now on the Democrat-controlled House and President Donald Trump, but the Republican-controlled Senate and Chief Justice John Roberts almost certainly will clear space on their calendar soon.

The House vote Thursday to formalize the impeachment inquiry against Trump is the first step in a process that likely will lead to the House’s sending articles of impeachment for the Senate to consider. That vote fell along party lines, with just two Democrats voting against the inquiry.

Although most analysts consider reaching the two-thirds Senate vote required for removal of a president virtually impossible, Majority Leader Mitch McConnell, R-Ky., said the Senate would conduct a trial if necessary, even though some conservatives have called for senators to dismiss the charges.

The Senate will decide how a trial moves forward, with discretion about some procedures, hearing from witnesses, length of the trial, and other matters. These issues are spelled out in both the Constitution and in Senate rules.

Here are answers to questions about what a Senate trial, probably in early 2020, would look like.

1. What Do Precedents of Johnson, Clinton Trials Tell Us?

The trial of President Andrew Johnson in 1868 on charges of violating the Tenure of Office Act lasted two months, and involved witnesses testifying on the Senate floor, similar to a regular criminal trial.

The 1999 trial of President Bill Clinton lasted a month, and was a “sham trial,” said former Rep. James Rogan, R-Calif., one of the House impeachment managers and author of the 2011 book “Catching Our Flag: Behind the Scenes of a Presidential Impeachment.”

Rogan was critical of then-Senate Majority Leader Trent Lott, a fellow Repubican, for short-circuiting the trial.

“It wasn’t a trial and Trent Lott told me, he said, ‘It’s going to look like a trial. Everybody’s going to call it a trial,’” Rogan said in an interview with The Daily Signal. “It’s the only trial I know of in American history where the prosecutors were not allowed by the jury to call a single witness to prove their case. The Senate voted in secret, 100 to zero, to prevent the House managers from calling one single live witness to prove their case.”

We don’t care if you have pictures of Bill Clinton standing over a dead woman with a smoking gun. The polls say they didn’t want him impeached. You guys impeached him and for doing that you just lost your majority.

The Senate had the full results of the investigation by  independent counsel Ken Starr, so it didn’t need witnesses, said David O. Stewart, author of the 2009 book “Impeached: The Trial of President Andrew Johnson and the Fight for Lincoln’s Legacy.”

“The Johnson trial had testimony, but the Senate probably didn’t need it,” Stewart, who represented U.S. District Judge Walter Nixon in his 1986 Senate trial, told The Daily Signal. “The facts were widely known.”

2. What’s the Process for a Senate Trial?

In preparation for an impeachment trial, the Senate will “issue a writ of summons to the respondent,” in this case the president, for either him or his counsel to appear for the trial on the date established by the Senate, according to the Congressional Research Service.

“Unlike what happened in the House, which was a departure significantly from past precedent on impeachment procedure, I expect the Senate to rely on precedent,” Thomas Jipping, who served as deputy chief counsel to the Senate Impeachment Trial Committee of U.S. District Judge Thomas Porteous in 2010, told The Daily Signal.

Jipping, now deputy director of the Meese Center for Legal and Judicial Studies at The Heritage Foundation, said a Trump impeachment trial likely would “follow the Clinton model.”

“The Senate is not in an advocacy role, but acts as a judge and jury,” Jipping said. “The House managers and [the] president’s lawyers will likely make motions procedurally to benefit them, and the Senate will vote on how it wants to proceed with the trial.”

After establishing a date, the Senate orders the House managers—members of the House acting as prosecutors—or their counsel to provide the Senate’s sergeant of arms with information about potential witnesses and other evidence to be subpoenaed for presentation during the trial.

“The Senate will determine questions of competency, relevancy, and materiality,” the Congressional Research Service report says.

Stewart said he has serious doubts witnesses would be called in any Senate trial of Trump over the Ukraine controversy.

The House managers and the president’s counsel may make motions or objections during the trial.

However, the presiding officer at the trial “may choose to put any such issues to a vote before the Senate,” the report by the Congressional Research Service says, and any senator “may request that a formal vote be taken on a particular question.”

Short of a rules change—itself requiring a two-thirds vote—a trial of Trump would follow the precedent of the Johnson and Clinton trials, both held before the full Senate.

The Senate appoints a committee to try judicial impeachments, Jipping said. However, Senate rules require a presidential impeachment to take place before the full chamber.

Judicial impeachments generally have been of district judges, who are appointed by the president. That contrasts with a president elected by voters in 50 states.

3. Will the Chief Justice Preside?

Chief Justice John Roberts almost certainly would preside over a trial of Trump, despite objections from some of the president’s defenders.

Article 1, Section 3, Clause 6 of the Constitution states: “ … When the President of the United States is tried, the Chief Justice shall preside.”

Last year, Roberts issued a statement in defense of the judiciary, implicitly responding to a Trump tweet criticizing federal judges. Some Trump defenders now call for Roberts to recuse himself from presiding over a Senate trial.

“There is already a crisis of confidence among the American people that we have a fair system of justice,” conservative radio host John Cardillo told The Washington Times. “When you have a chief justice of the Supreme Court overtly making comments that are derogatory to the president of the United States, take all speculation out of the process.”

Roberts, who was appointed by President George W. Bush in 2005, in response to an inquiry from the Associated Press, subsequently asserted: “We do not have Obama judges or Trump judges, Bush judges or Clinton judges. What we have is an extraordinary group of dedicated judges doing their level best to do equal right to those appearing before them.”

As might have been expected, Trump tweeted a response to the chief justice:

“The role of the chief justice in an impeachment trial is largely ministerial, an administrative role,” Jipping said. “He keeps order and a sense of solemnity.”

Such disputes have nothing to do with impeachment, Stewart said.

“It’s ridiculous to complain about Chief Justice Roberts because the chief justice is not a significant figure in the trial anyway; he’s more of a traffic cop,” Stewart told The Daily Signal. “He could rule on objections, but can be overruled by a vote of the Senate.”

4. Could the Senate Dismiss the Charges?

Republicans’ 53-seat Senate majority means a simple majority vote of 51 is improbable, much less the 67 votes required to convict and remove a president—short of major revelations in the Ukraine controversy.

Fox News Channel host Laura Ingraham, a lawyer who once clerked for Justice Clarence Thomas, said Wednesday of the Senate majority leader: “McConnell can and should aggressively push for a blisteringly short impeachment trial.”

Constitutional lawyer and former top Reagan administration Justice Department official Mark Levin has said the Senate should go a step further, as it has the authority to stop the trial.

“The Senate must not allow itself to be the plaything of Pelosi and the House Democrats, who are violating every rule,” Levin, a bestselling author, said on his popular radio show earlier this month.

“And only the Senate has the power to police what House Democrats are doing,” Levin said. “No other body. No court, not the executive branch, only the Senate.”

Although the Senate might have the authority to do so, at least for political reasons, senators will want to appear to give the impeachment charges a fair hearing, Stewart said.

“They will be politically sensitive to the appearance of looking unfair,” Stewart said. “They certainly don’t want to run the risk of being accused of ignoring their constitutional obligations.”

Such a move would be similar to a criminal court’s dismissing an indictment before a trial.

From a practical standpoint, it would spare the country a waste of time, argued Jenny Beth Martin, co-founder and national coordinator of Tea Party Patriots, a conservative group.

“[The] Senate should move quickly to vote on a resolution dismissing the House impeachment charges by a simple majority vote,” Martin wrote earlier this month in USA Today. “This would spare the nation the political agony of a drawn-out Senate trial, where the outcome is a foregone conclusion and the only result will be further polarization.”