These 2 House Democrats Voted ‘No’ on Impeachment Inquiry 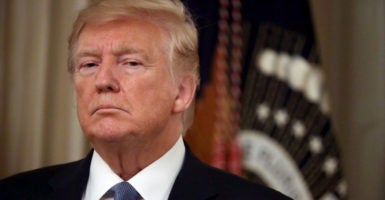 The House voted to open an impeachment inquiry regarding President Donald Trump with 232 in favor and 196 against. Not a single House Republican voted yes.

Van Drew warned that impeachment would “further divide the country” in a statement he released following the vote, according to NorthJersey.com.

“However, now that the vote has taken place and we are moving forward I will be making a judgment call based on all the evidence presented by these investigations,” he said in the statement. “My hope is that we are still able to get some work done to help the American people like infrastructure, veterans benefits, environmental protections, immigration reform, reducing prescription drug costs, and strengthening Social Security.”

The New Jersey Democrat won a GOP seat in 2018 and might face a tough re-election year, NorthJersey.com reported. Voters in Van Drew’s district largely voted for Trump in the 2016 election.

Peterson is one of only two Democrats remaining in the House who voted to authorize the impeachment of then-President Bill Clinton, according to Fox News.

The Minnesota representative comes from the 7th Congressional District, which largely voted for Trump in 2016—and no other House Democrat comes from a district more supportive of Trump, the Duluth News Tribune reported.

The impeachment inquiry vote came over a month after House Speaker Nancy Pelosi announced the inquiry.

The vote also followed a whistleblower complaint about Trump’s phone call July 25 with Ukrainian President Volodymyr Zelenskyy, but Democrats had passed a resolution early in September setting impeachment parameters before the complaint was made public.

Van Drew and Peterson did not respond immediately to requests for comment from The Daily Caller News Foundation.