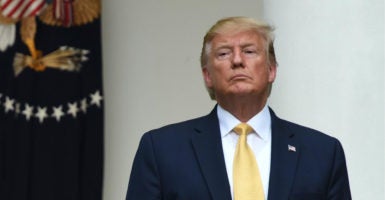 Texas Democratic Rep. Al Green introduced articles of impeachment against President Donald Trump Tuesday, paving the way for the first vote on the measure since Democrats took control of the House.

Green introduced the resolution after the House voted to condemn Trump over his weekend remarks about four freshmen House Democrats.

Trump tweeted that Democratic Reps. Alexandria Ocasio-Cortez of New York, Ilhan Omar of Minnesota, Ayanna Pressley of Massachusetts, and Rashida Tlaib of Michigan should “go back and help fix the totally broken and crime infested places from which they came” over their criticism of the U.S. Three of the four were born in the U.S.

Reading from the articles of impeachment, Green said Trump “is unfit to be president, unfit to represent the American values of decency and morality, respectability and civility, honesty and propriety, reputability and integrity.”

This is the third time Green has introduced articles of impeachment against Trump, but the first since Democrats have had control of the House of Representatives.

Democrats now have two days to consider Green’s resolution, and can vote either to debate it, send it for a committee vote, or table it.

"Donald John Trump, president of the United States, is unfit to be president." – Rep. Al Green (D-TX) filing articles of impeachment against President Trump for the third time.
? https://t.co/a7MZYnkopF pic.twitter.com/aRd5osLLx4

Green’s impeachment push poses a problem for Democratic leadership, including House Speaker Nancy Pelosi. She and other party leaders have pushed back against calls for impeachment, saying that doing so will play into Trump’s hands. Of 235 Democrats in office, only around 80 have come out in favor of impeachment.

Many Democrats have avoided announcing their position on impeachment by saying they want to wait for former special counsel Robert Mueller to testify about the Russia probe. Mueller’s testimony was delayed until July 24.

Mueller’s team was unable to establish that Trump or his campaign conspired with Russia. Mueller also declined to make a decision on whether Trump obstructed the Russia probe. But some Democrats have said that Mueller’s 448-page report on the Russia probe provided enough evidence to support impeachment hearings against Trump.