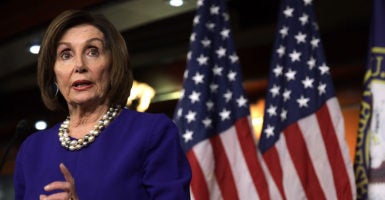 It’s comforting, no doubt, to believe that Donald Trump has survived the impeachment trial because he possesses a tighter hold on his party than did Barack Obama or George W. Bush or any other contemporary president. In truth, Trump, often because of his own actions, has engendered less loyalty than the average president.

It’s difficult to recall, after all, a single Democratic senator throwing anything but hosannas Obama’s way, which allowed the former president to ride his high horse from one scandalous attack on the Constitution to the next.

In 1998, no Democrat voted to convict Bill Clinton, who had engaged in wrongdoing for wholly self-serving reasons, despite the GOP’s case being far more methodical and incriminating.

The chances of any party’s removing its sitting president without overwhelming evidence that fuels massive voter pressure are negligible. It’s never happened in American history—unless you count the preemptive removal of Richard Nixon—and probably never will. Democrats are demanding the GOP adopt standards that no party has ever lived by.

Perhaps if the public hadn’t been subjected to four years of interminable hysteria over the United States’ imaginary descent into fascism, it might have been less apathetic toward the fate of “vital” Ukrainian aid that most Democrats had voted against when Obama was president.

You simply can’t expect a well-adjusted voter to maintain CNN-levels of indignation for years on end.

Beyond the public’s mood, the Democrats’ strategy was a mess. House Democrats and their 17 witnesses set impossible-to-meet expectations, declaring that Trump had engaged in the worst wrongdoing ever committed by any president in history. (I’m not exaggerating.) When it comes to Trump criticism, everything is always “the worst thing ever!”

Even if Trump’s actions had risen to the level of removal, Reps. Adam Schiff and Jerrold Nadler were terrible messengers to make the case. These are not the politicians you tap to persuade jurors; they’re the politicians you pick to rile up your base.

Despite all the fabricated praise directed at Schiff over the past couple of weeks, the man reeks of partisanship. Not only because he’s been caught lying about the presence of damning evidence against Trump on more than one occasion, but because he played a sketchy role in helping the whistleblower responsible for sparking the impeachment come forward.

Even then, instead of spending the appropriate time building a solid case, subpoenaing all the “vital” witnesses, and laying out a timeline, House Democrats, by their own admission, rushed forward.

They justified taking shortcuts by warning that the country was in a race to stop Trump from stealing the 2020 election just as he had allegedly stolen the 2016 election.

That wouldn’t have been a big deal if House Speaker Nancy Pelosi hadn’t exposed the supposed need for urgency as a ruse, by withholding the articles of impeachment from the Senate for weeks.

She did so despite having zero standing to dictate the terms of the trial, no constitutional right to attempt to dictate them, and no political leverage.

In the end, she got nothing from Senate Majority Leader Mitch McConnell for her trouble.

Meanwhile, Democrats had spent most of the House hearings focusing on difficult-to-prove specific criminal offenses of “bribery” and “extortion”—poll-tested words that were taken up after the House realized “quid pro quo” didn’t play as well with the public.

Then, they didn’t even bother including the “crimes”—no, you don’t need a violation of criminal law to impeach, but the word was incessantly used by House Democrats anyway—in their open-ended articles of impeachment, written expressly to compel Senate Republicans to investigate for them.

The House had no right to demand that, and the Senate had no reason to comply. So as soon as the upper chamber took up impeachment, Democrats began dropping one “bombshell” leak after the next—the same strategy they deployed during the Brett Kavanaugh hearings—to drag out the spectacle and maximize the political damage.

Some of us would certainly have preferred that more Republicans concede Trump’s call was unbecoming and, in parts, inappropriate, even if it didn’t rise to the level of an impeachable offense. But Democrats keep demanding that Republicans play under a different set of rules.

The Constitution, a document under attack by the very people claiming to save it from the president, worked exactly as it should.

The House is free to subpoena all the “vital” witnesses Republicans have supposedly ignored, and then send a new batch of impeachment articles. Impeachment isn’t tantamount to a “coup” any more than Senate acquittal is unconstitutional or corrupt.

Pretending that democracy is on the precipice of extinction simply because you didn’t get your way, though, is nothing but histrionics.