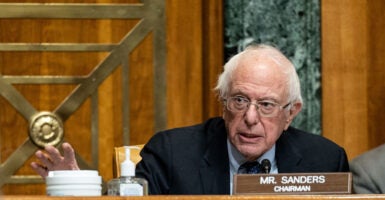 House Democrats’ deeply flawed “stimulus” bill includes a provision that would increase the minimum wage to $15 per hour, a policy change that would be extremely harmful. It would kill jobs, increase prices, harm the economic recovery, and even make child care unaffordable for many families.

Because Congress is considering the bill under the budget reconciliation process, which allows legislation to avoid the filibuster in the Senate, all provisions in the bill must be limited to spending or revenue, as required by the Byrd rule.

Provisions that are considered extraneous because they violate any of the six tests laid out by the Byrd rule are subject to a point of order in the Senate and removed from the bill.

Increasing the minimum wage, as proposed by the “stimulus” bill, violates two Byrd rule tests and should not be allowed under the reconciliation process.

First, it adds to the deficit in the years beyond the budget window without being offset by other spending reductions in the same title of the bill.

Unless additional provisions within the jurisdiction of the Education and Labor Committee are added to the bill that cut spending by significant and growing amounts in 2031 and every year thereafter to offset the costs of the minimum wage increase, then the minimum wage provision will be considered extraneous.

While increasing the minimum wage would increase the deficit by about $54 billion over the next decade, the changes in outlays and revenues from the policy change are merely incidental to the nonbudgetary components of the provision.

The Congressional Budget Office has said that the entirety of the provision’s increase in the deficit is due to indirect effects of the policy change.

The only expenses that the Congressional Budget Office classified as having “direct effects on the budget” due to the minimum wage increase result from “raising the pay of a small group of federal employees,” costs which only would directly affect the federal budget if provided for in future appropriations acts.

The Congressional Budget Office further stated that the bill would “indirectly affect” the budget in other ways, including by increasing costs, tax receipts, and spending on health and income security programs.

In the Congressional Budget Office’s most recent cost estimate of the minimum wage increase, only the types of expenses the CBO had described as indirect effects were estimated to change the budget.

The Congressional Budget Office estimated in 2019 that the Raise the Wage Act would impose significant private-sector mandates, adding $48 billion in annual costs on private-sector employers.

The 10-year cost of the private sector in complying with the policy change is 887% greater than the increase in the federal deficit, even taking into account the indirect effects of increasing the minimum wage.

In contrast to the “nearly 7,000” federal workers (out of 2.8 million) who would be due wage increases as a result of increasing the minimum wage, the policy change would affect tens of millions of private-sector workers.

The Congressional Budget Office estimates that 1.4 million people would lose their jobs. The policy would lower real gross domestic product as a result of reduced employment while prices for goods and services would increase.

These estimates are consistent with prior Congressional Budget Office estimates of dramatic effects on the private sector of the policy change of increasing the minimum wage.

Sen. Bernie Sanders, I-Vt., who currently serves as chairman of the Senate Budget Committee, recently got the Congressional Budget Office to write in a letter that increasing the minimum wage would affect more budget functions than two policies that were included in the Tax Cuts and Jobs Act, which went through the reconciliation process to become law.

This information does not change the fact that increasing the minimum wage, as a policy, does not meet the requirements of the merely incidental test.

The two provisions of the tax cut law that Sanders asked the Congressional Budget Office to reference in the letter—requiring a lease sale in the Arctic National Wildlife Refuge and reducing the penalty tax for the Affordable Care Act’s individual mandate—had clear, direct effects on outlays and revenues (selling a federal asset and reducing a tax), and therefore passed the Byrd rule tests.

The provision pertaining to the Arctic National Wildlife Refuge that became law was revised through the legislative process to ensure Byrd rule compliance. In fact, the reason that the Obamacare individual mandate remains law, while the tax was able to be reduced to $0, is due to the Byrd rule.

It is clear that while increasing the minimum wage does have some indirect effects on the budget, those effects are merely incidental to the significant nonbudgetary components of the policy change.

The fact that the minimum wage increase violates the Byrd rule and is ineligible for a reconciliation bill is recognized among leading Democrats.

Speaking about the minimum wage, President Joe Biden told a group of elected officials, “I really want this in there but it just doesn’t look like we can do it because of reconciliation.”

Sen. Kyrsten Sinema, D-Ariz., said, “The minimum wage provision is not appropriate for the reconciliation process. It is not a budget item. And it shouldn’t be in there.”

Sen. Joe Manchin, D-W.Va., said, “Well, first of all, I don’t think this is the place for that. This is not within the guidelines of the guard rails that we talked about, which is basically the budget reconciliation.”

Even the chairman of the House Budget Committee, Rep. John Yarmuth, D-Ky., who is leading the effort to include the controversial provision in the reconciliation bill, called the idea a “stretch.”

The Senate parliamentarian is expected to provide an advisory opinion to senators this week on the minimum wage and the Byrd rule.

If new precedent is set to ignore the common understanding of the Byrd rule, the floodgates will open and controversial policies that previously were out of order under reconciliation could then be passed through the Senate by a majority vote.

Taking this “ultimate power move” would be a consequential decision that would be the equivalent of detonating the nuclear option on the legislative filibuster.

Not only is increasing the minimum wage a terrible idea, enacting this policy change should not be permitted under the budget reconciliation process.