How a Higher Minimum Wage Could Lead to Automated Restaurants 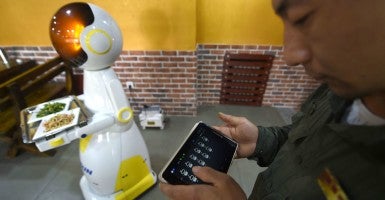 A waiter controls a robot to serve dishes at a restaurant in Shenyang, capital of northeast China's Liaoning Province, May 21, 2015 (Photo: CHINE NOUVELLE/SIPA/Newscom) 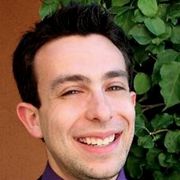 Want to know what the future of the restaurant industry looks like? It could come in the form of a San Francisco fast food restaurant named Eatsa.

Eatsa is a quinoa (a South American grain dish) eatery that is preparing to automate most of its workforce.

The Ferenstein Wire got a sneak peak at the restaurant, which will be debuting a new healthy fast food prototype in downtown San Francisco. The restaurant promises cheap, healthy food and has customizable menus with an automated experience.

(It’s difficult to describe all the futuristic design elements that go into the delivery process. Eatsa is science fiction in real life.)

Instead of a front counter, customers choose their bowls at a tablet kiosk. Then food pops up in one of a series of translucent cubbyholes a few minutes later.

For now, little of the restaurant is actually automated, but the owners plan to replace a good portion of their cooking and serving workforce with robots in the next year of two.

So Eatsa will function as a test for the feasibility of automated restaurants.

Currently, Eatsa uses a line of chefs working diligently behind the scenes, but their goal is for patrons to be unaware if humans or robots are serving them.

“Our initial prototypes will allow us to test the customer experience and our food, as well as the software system that we’ve developed to tie everything together from ordering through kitchen operations to pick-up[.] … Eatsa’s food is certainly tasty, as well as cheap.

The company promises a bowl full of nutrients that outmatches many of their less healthy competitors. A $6 meal is virtually unheard of in San Francisco outside McDonald’s. Eatsa’s food could come from a pricey restaurant or one of the city’s super-expensive upscale grocers.

Drummond says he’s able to get these low prices through a series of technological efficiencies that bring down the cost of made-to-order food.

Technology plays an important role in improving the speed, convenience and efficiency of our experience. By making things as efficient as possible, we can offer a great price now for a high quality product.

Eventually, the automation of the kitchen could allow Eatsa to bring healthy meals to food deserts all around the city.

Anywhere there’s a McDonald’s, Eatsa can compete, thanks in part to automation. This could be very important for nutrition-deprived neighborhoods all over the country.

Some restaurants claim that the new minimum wage has forced them to shut their doors. As restaurant workers around the country lobby for better pay, there has been speculation that companies will invest in technology that automates human labor out of existence.

This appears to now be becoming a reality as Eatsa looks to automate most of its business.

Silicon Valley is making it increasingly difficult for governments to force businesses to shoulder the responsibility of economic outcomes through laws and regulations.

Eatsa’s mission to bring tasty, affordable food to the masses is certainly compelling, and their executive has made the case that restaurant automation is not only possible, but a possibility in the not so distant future.