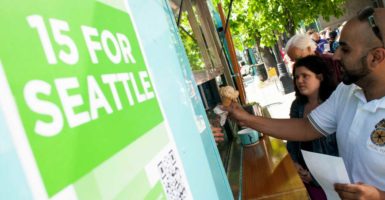 The study's findings could be a critical blow to the “Fight for $15” minimum wage movement. (Photo: David Ryder/Reuters /Newscom)

Helping the “forgotten man” was an important and successful message for President Donald Trump in his election campaign.

He tapped into the anxieties of many Americans who are struggling to find work and are watching as traditional industries disappear or are gobbled up by automation.

While some of this development has been natural, much has been artificially created by bad policies. In particular: the minimum wage.

A bombshell report was released Monday about the impact of minimum wage hikes in Seattle, Washington. The study, conducted by economists at the University of Washington, showed that minimum wage laws significantly decreased employment for lower-income workers.

Additionally, the report found that average hours for low-income employees had also declined since Seattle’s $13 minimum wage law began being implemented in 2015.

The original proposal was for a $15 minimum wage—which has been a benchmark for national minimum wage advocates. If the study is accurate, one would imagine a further $2 wage minimum would have even more drastic effects.

Employers, burdened by the newly imposed expenses, are cutting hours and cutting payroll. Under these conditions, many Americans are struggling to find work, or are underemployed when they do. A toxic brew.

One of the more explosive findings was that the “wage increase to $13 reduced hours worked in low-wage jobs by around 9 percent, while hourly wages in such jobs increased by around 3 percent. Consequently, total payroll fell for such jobs, implying that the minimum wage ordinance lowered low-wage employees’ earnings by an average of $125 per month in 2016.”

So low-income employees earned, on average, $1,500 less per year. This is a big deal for someone already living on a tight budget.

Let’s also note that this took place during an economic boom in Seattle.

While critics of the study have taken this as a reason to doubt its findings—the argument being that booming economies tend to squeeze out low-income workers—it should be nonetheless significant that while Seattle was undergoing explosive growth, those at the bottom of the income spectrum were getting squeezed out.

The result of the minimum wage hikes shouldn’t be surprising. As The Heritage Foundation noted in 2016:

Companies hire workers when the additional earnings their labor creates exceeds the cost of employing them. Starting wages of $15.00 per hour mean full-time employees must create at least $38,700 a year in value for their employers. Such a high hurdle would make it much harder for less experienced and less skilled workers to find full-time jobs.

Even some supporters of minimum wage concluded from the research that the minimum wage rates may at least be too high, even if they agree with them on principle.

The findings could be a critical blow to the “Fight for $15” movement. This group’s national agenda had already suffered a setback when a separate study found a significant number of middle-tier restaurant closures occurred after an increased minimum wage came into effect in San Francisco.

But now there is more hard evidence that minimum wage laws both fail to accomplish the ends they were created for and in fact create more burdens for those they are intended to benefit. Continuing on this path will be enormously destructive for our country.

Minimum wage policies have been billed as a boon for the poor, but the University of Washington study shows how these well-meaning policies can pave the road to unemployment and misery.

Few situations are more destructive to individuals and society than the lack of meaningful work for large swaths of the population—as even a low-paying job is better than no job or opportunity at all.

When President Abraham Lincoln was asked by a friend what the most important value was in carving out a successful career, he responded: “Work, work, work is the main thing.”

Lincoln saw the “opportunity society” and reaping the fruits of one’s labor as fundamental to the growth and underlying goodness of America. It was one of the many reasons he so fiercely opposed slavery.

Barriers to employment will naturally push more Americans out of work and on to the welfare rolls, sapping the skills and dignity of Americans who may already be struggling.

Increasing the obstacles for people trying to find a job perniciously turns the country into what political scientist Walter Russell Mead called a “warehouse” society of mass unemployment, an all-encompassing public dole, and no future.

This is an outcome that for millions of Americans would destroy “independence founded on achievement, on the human dignity that comes from doing work.”

Massachusetts Institute of Technology economist David Autor called this a “canary in the gold mine” moment—and we must heed this warning.

It’s one of many harbingers for how America—renowned for its dynamism—can descend on the stultifying path of decline that Europe has already sailed.