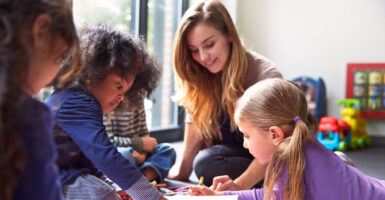 Considering that child care for two children could cost upward of 40% of the median household income in many states, a $15 minimum wage could make child care unattainable for millions of families. (Photo: Cavan Images/Getty Images)

Many families struggle to find child care, especially at a cost they can afford. A $15 federal minimum wage could make child care unattainable for millions more families.

Higher wages are a great thing, especially for child care workers who serve such an important role in the lives of children and families. But the reality is that higher wages that come from government mandates result in unintended consequences.

A new Heritage Foundation study estimates that a $15 minimum wage would increase the cost of child care by 21%, on average, across the U.S., adding an extra $3,728 in costs for a family with two children.

This is because child care wages can be lower than the proposed $15 per hour minimum—the median wage was $11.65 per hour in 2019—and child care providers’ hands are tied through regulations that prevent them from responding to minimum wage hikes in the ways that many other businesses do.

Whereas many businesses would respond to being forced by the government to raise wages by laying off workers, reducing employees’ hours, cutting back on other forms of compensation, or automating jobs, child care providers do not have these options.

While fast-food restaurants can replace cashiers with kiosks and Amazon can replace warehouse workers with machines, it’s unlikely that robots will ever be able to watch children (nor would parents want that).

Consequently, almost the entirety of wage increases for child care workers would be passed onto families. But cost increases would not be equal across the U.S.

Families in lower-cost areas—especially those in the South and Midwest—would experience the largest increases. Child care prices would rise by more than 30%, on average, in 10 states, including a whopping 43% increase in Mississippi.

This would translate into thousands of extra dollars per year in child care costs for many families.

Considering that child care for two children could cost upward of 40% of the median household income in many states, a $15 minimum wage could make child care unattainable for millions of families.

This could reduce employment and income among families with children.

In two-parent homes, it may no longer make financial sense for both parents to work, even if the family is struggling to make ends meet. Since women are more likely to stay home than men, this could widen gender-based differences in the labor market.

Others—especially single-parent families—could have to resort to non-licensed or illegal child care, or depend on unpaid child care of friends and family.

The point is that all families have different needs and should be free to make decisions based on what’s best for them.

Some families have one parent at home. Others have both parents working. And most single parents have no choice but to work. Bad policy like the $15 federal minimum wage would hurt low-income and working families the most by making the child care they need completely unaffordable.

Unaffordable child care costs is just one of the many ways a $15 federal minimum wage would lead to a cascade of unintended consequences.

Expanding apprenticeships and other alternative forms of education; opening doors to entrepreneurial opportunities for lower-income workers through occupational licensing reform and improved freedom to contract; and reducing unnecessary regulations so that businesses can invest more in workers are just a few ways to boost incomes without hurting others.

And by easing unnecessary regulations on child care providers, giving parents choices on where to use existing public child care dollars, and making it easier for parents to save for child care, policymakers could help more families find the care they need, in an environment they want, and at a cost they can afford.