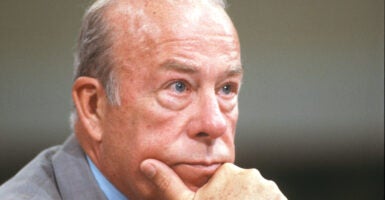 Former Secretary of State George Shultz died Saturday at the impressive age of 100 at his home in Stanford, California, where he had been a distinguished fellow at the Hoover Institution since 1982.

Shultz died on the birthday of the president, Ronald Reagan, with whom he left his greatest mark on history.

The cause of death has not been announced, but Shultz had been well enough to celebrate his “first century,” as he put it, on Dec. 13. He also celebrated the occasion with an essay on lessons learned from his many decades of public service and a new book published in November, “A Hinge of History: Governance in an Emerging New World.”

To the very end, Shultz had the enviable gifts of acuity and sense of mission that characterized so much of his public life.

Shultz was born on Dec. 13, 1920, in New York City. His first stint of service was enlistment in the U.S. Marines in World War II. He saw combat in the Pacific, at the invasion of Angaur Island, and memorably displayed quiet leadership when stepping in to create order out of the chaos preventing the distribution of supplies on the beach.

Retiring as a captain, Shultz after the war went onto complete a doctorate in industrial economics at the Massachusetts Institute of Technology. His first career was in academia, as professor and dean of economics at the University of Chicago Graduate School of Business.

In 1955, Shultz was called to the first of a number of government positions, serving on President Dwight Eisenhower’s Council of Economic Advisers.

Shultz subsequently served as an informal adviser to the Kennedy and Johnson administrations, and he joined the Nixon administration as secretary of labor and later as director of the Office of Management and Budget.

But the role for which Shultz became best known was as Reagan’s second secretary of state.

Despite his great position of influence at the heart of the federal government, Shultz had a low-key, unassuming manner. He also possessed a keen intellect and a dedication to principle and honesty, values that would certainly improve Washington immensely today.

With Reagan, Shultz played a key role in masterminding the end of the Cold War through a combination of military and economic toughness and a willingness to negotiate firmly with the Soviets.

After the buildup of intermediate-range nuclear forces in Europe to counter the Soviet threat, Shultz helped negotiate the Intermediate-Range Nuclear Forces Treaty, which prohibited those weapons on both sides.

At that time, the treaty made sense. Since then, Soviet and later Russian noncompliance caused President Donald Trump to decide to leave the treaty in 2019.

With a life of so many accomplishments and distinguished public service opportunities, what was it Shultz had that made him so respected?

In his essay for the Hoover Institution magazine, “Life and Learning After One Hundred Years,” published on Dec. 13, Shultz himself identified trust as the most important ingredient in success.

When trust was in the room, whatever room that was—the family room, the schoolroom, the locker room, the office room, the government room, or the military room—good things happened.

When trust was not in the room, good things did not happen. Everything else is details.

Considered from a contemporary perspective, the deep erosion of trust in our political institutions and media is surely one of the most profound problems facing the United States today.

Contemplating Shultz’s life, spanning the century that made this country the world’s dominant superpower, his faith in democracy and in the fundamental goodness of this nation is truly inspiring. Fairness, principles, humility, and service to country are all great attributes that laid the foundation of his truly exceptional life and career.