Why We Fought the Cold War 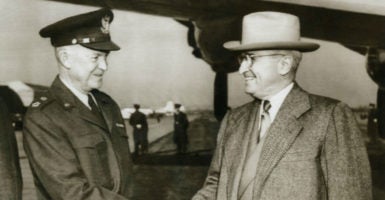 President Harry Truman seeing Gen. Dwight Eisenhower off to Paris, where he would begin organizing NATO, one of the strategic instruments used during the Cold War, Jan. 6, 1951. (Photo: Everett Collection /Newscom)

The Cold War that lasted from 1945 until 1991 was a very big deal. At stake was whether the world would be dominated by the forces of totalitarianism, led by the Soviet Union, or inspired by the principles of economic and political freedom, embodied in the United States.

At stake was whether the many millions behind the Iron Curtain would remain in captivity or go free.

At stake was whether communism would be exposed for what it was and is—a pseudo-religion posing as a pseudo-science imposed on an unwilling people by force.

With the fall of the Berlin Wall followed by the implosion of the Soviet Union a quarter of a century ago, critical truths about communism were proven:

The world has changed in all manner of ways since 1945 when the Cold War began and since 1991 when it ended. But certain things remain true, especially in the conduct of our foreign policy.

Contrary to Niccolò Machiavelli and his modern-day disciples, power is not all. The ideas that undergird a regime matter because they guide governments and help us to understand their conduct.

The Soviet Union was shaped by Marxism-Leninism. Although Russian President Vladimir Putin is not a latter-day Stalin, his desire for empire and his willingness to use force to achieve political goals reflect his training as a KGB agent during the Stalinist era.

Friends and allies matter. During the Cold War, the United States led a grand alliance against the Soviet Union, employing economic and strategic instruments such as the Marshall Plan, NATO, the “special relationship” with Great Britain, and the Reagan Doctrine. In contrast, the Soviet Union was never able to command true allegiance from the members of the Warsaw Pact or the nationalities within the USSR.

Leadership matters. In one sense, the history of the Cold War is the biography of leaders on both sides of the Iron Curtain. The conflict began under Stalin and U.S. President Harry Truman and was ended by Reagan, British Prime Minister Margaret Thatcher, Pope John Paul II, Czech dissident (and playwright) Vaclav Havel, and, yes, Soviet President Mikhail Gorbachev.

Gorbachev helped end the Cold War by abandoning the Brezhnev Doctrine that had propped up the communist regimes of Eastern Europe for decades. He did so for the most practical of reasons: Moscow could no longer afford it.

Statecraft matters. Victory over a determined adversary, whether it is the Soviet Union or radical Islam, requires not only strength and resolve but a strategy relevant to the times and the nations involved.

A U.S. strategy should begin with the thesis that the United States should step in only when its vital interests are at stake and it has the capability to act.

Those interests include: protecting American territory, sea lanes, and air ports; preventing a hostile power from controlling Europe, East Asia, or the Persian Gulf; ensuring American access to world resources; expanding free trade throughout the world; and protecting Americans against threats to their lives and well-being.

Whether it is clashes with Islamic terrorists or long-term challenges from autocratic China or imperialist Russia, a prudent foreign policy, guided by our founding principles of liberty and justice, and based on our capabilities, offers the best path forward for the United States.