Remembering the Gipper: Why the Memory of Ronald Reagan Is Still Relevant to Young People Today 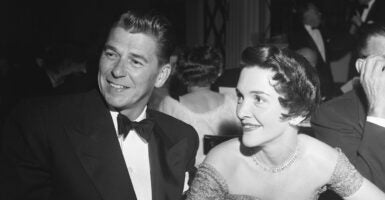 Former President Ronald Reagan would have turned 110 on Feb. 6. He is pictured here with his wife Nancy in 1953. (Photo: Michael Ochs Archives/Getty Images)

Former President Ronald Reagan would have turned 110 last Saturday, and many Americans of all political stripes still reflect with nostalgia and pride on our memories of the president known as the Gipper.

Many of the pieces commemorating Reagan’s milestone birthday focused on the political ramifications of Reagan’s presidency, but paid little attention to the man beyond the myth.

By concentrating on Reagan’s role in ending the Cold War, in spurring the economic ingenuity and machinery of the Reagan Revolution, in handling the war on drugs, and his involvement in the Iran-Contra Affair, they miss a deeper analysis of the person himself, and what he represents as a fellow American rather than simply as president.

One can hardly blame them. As one of his biographers, Lou Cannon, noted, “People who had worked for him much of their lives suspected that there was something beneath the surface they had never seen, but they did not know what the something was.”

Democrats look up to icons such as former President John F. Kennedy and Martin Luther King Jr.—worthy role models in their own right for the causes they served.

But what does Reagan represent to young conservatives or even the younger generation as a whole?

Perhaps “Bedtime for Bonzo,” in which Reagan plays a professor who tries to parent a chimp, unintentionally offers a deeper glimpse of Reagan’s own thoughts on the subject.

“A lot of people think they were born better than others. I’m trying to prove it’s the way you’re raised that counts,” Reagan’s character says in the movie. “But even a monkey brought up in the right surroundings can learn the meaning of decency and honesty.”

Reagan learned this growing up in poverty with an alcoholic father in a small town in Illinois.

He played football at Eureka College, where he also served as the student body president and routinely participated in the school theater. Like his own dad, who refused to join the KKK because of his commitment to racial equality, Reagan defied the segregation and racism of his times by inviting his black football teammates to his mother’s house when a local hotel refused them entry.

A radio commentator and Hollywood actor who was often derided by the elites, he earned the title of the Great Communicator, with his incredible ability to understand the wishes of the other side, whether it be former Soviet leader Mikhail Gorbachev, the East Germans, or opponents in Congress.

His faith in the goodness of his fellow man—informed by the Christian faith of his mother, his positive outlook, and his self-contained private life—enabled him to leave a unique mark on the world.

As Former President Barack Obama once reflected, “Ronald Reagan changed the trajectory of America in a way that, you know, Richard Nixon did not and in a way that Bill Clinton did not … he tapped into what people were already feeling, which was: We want clarity, we want optimism, we want a return to that sense of dynamism and entrepreneurship that had been missing.”

As a president, but more importantly as a person, Reagan’s sense of purpose illustrated an abiding, fundamental, and optimistic faith in the American dream. Perhaps he believed in its vision because he had lived and exemplified it in so many respects.

Unlike some of his predecessors, such as Presidents Richard Nixon and Lyndon Johnson, whose win-at-all-costs mentalities tarnished their legacies, Reagan deployed a twinkle in the eye and a disarming and simplistic ease that would resonate with all of us.

Despite obstacles in his youth and political career not unlike those of Nixon and Johnson, Reagan always maintained a sense of optimism.

Nixon’s favorite movie was “Patton,” which depicts the story of an intense World War II general who infamously slapped one of his subordinates. Kennedy enjoyed James Bond books and movies. Reagan’s favorite film was the “The Sound of Music,” in which the von Trapps, a gifted family who bond through music, are forced to escape their home in Austria to avoid persecution by the Nazis.

The theme of the musical is one that Reagan would have understood well. Even after Americans lost faith in their government during some of the gloomiest and polarizing times in our nation’s history, Reagan, through his optimism and heart-warming smile, found a way to restore it.

Sadly, Christopher Plummer, the actor who played the role of Captain von Trapp in “The Sound of Music,” died last Friday, a day before Reagan’s birthday, and George Shultz, secretary of state for most of Reagan’s two terms, died on Sunday.

As tragic as these coincidences are, they are also fitting. Reagan, Plummer, and Shultz, through their work, touched countless lives and gave hope to millions.

They gave the hope that no matter how dark and dire things are, no matter how trapped we young people feel in our own lives, how insecure we feel about our futures, there is always reason to have faith in the goodness of others and to have optimism for the future.