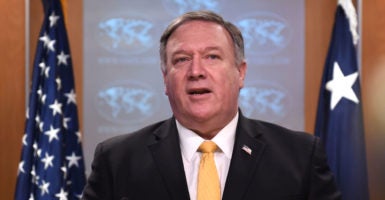 Secretary of State Mike Pompeo declared Russia to be in material breach of the treaty for developing and deploying a ground-launched cruise missile whose range violates INF limits. (Photo: Eric Baradat/ Contributor/Getty Images)

Russia has been violating the treaty since 2008 and has deployed weapons that pose a serious military threat to America and its European allies.

Withdrawal from the INF Treaty would allow the U.S. to develop and deploy new weapons to regain its military advantage over Russia, while letting Russia and our allies know that the U.S. will not stand idly by while adversaries blatantly violate treaty obligations.

While the U.S. should still continue to encourage Russia to return to treaty compliance, withdrawal provides an opportunity to create a safer world for America and its allies.

On Dec. 4, Secretary of State Mike Pompeo declared Russia to be in material breach of the treaty for developing and deploying a ground-launched cruise missile whose range violates INF limits.

His announcement that the U.S. would leave the treaty in 60 days if Russia did not destroy the offending missile system has drawn both ire and admiration over the past two months.

Remaining in the INF Treaty and unilaterally following its limitations creates several significant disadvantages for America.

If the U.S. remains a party to a treaty that Russia willfully violates, it would set the precedent that America does not enforce consequences on adversaries who break the rules.

Furthermore, it would allow Russia to continue developing and testing weapons that threaten America and its allies while the U.S. remains bound by the treaty restrictions and loses by default an arms race in which it was barred from participating.

Withdrawing from the treaty would allow the U.S. to increase its ability to confront today’s dynamic global threat landscape in three significant ways.

America would no longer be bound by restrictions on intermediate-range ground-launched weapons development and testing, enabling the nation to catch up and counter the advanced ground-launched missile capabilities Russia has built over the past 10 years.

This new freedom would also permit America to counter growing intermediate-range missiles arsenals, not only from Russia, but also from almost 30 other nations, including China, North Korea, and Iran.

Second, exiting the treaty would demonstrate to Russia and the world that violating treaties with the U.S. has consequences. This demonstration of resolve would also reassure U.S. allies of the commitment America has to its treaty and international obligations, increasing their trust in our commitments and strengthening ties with the U.S.

Strong alliances with America’s European and Indo-Pacific allies is more important than ever as the world faces today’s increased threats from Russia and other adversaries.

There are some actions the United States should take now to better prepare for a post-INF Treaty world. Specifically, America should continue developing and deploy low-yield submarine-launched ballistic missiles and low-yield sea-launched cruise missiles.

Critics argue that the United States’ treaty exit could lead to a new arms race with Russia. Rather, a U.S. withdrawal from the INF Treaty would not only show the world that it will hold nations that violate treaties and arms control agreements accountable, but also would enable America to better defend the homeland and its allies.

While the U.S. should strive to encourage Russia to return to INF Treaty compliance, arms control experts and even our European allies hold little faith that Russia will reverse the course it set more than 10 years ago.

Rather, Russia’s announcement on Feb. 2 that it was also immediately suspending its INF Treaty obligations and would no longer initiate nuclear arms control talks with the U.S. signals its true intentions.

U.S. development and deployment of low-yield, sea-based missiles; ground-launched cruise missiles, and advanced cruise missile defense systems may be the only actions that could spur Russia to re-engage in INF negotiations.

The United States’ INF Treaty withdrawal would finally allow it to deploy advanced weapon systems to counter growing military threats from Russia, as well as demonstrate the nation’s commitment to holding accountable nations that violate their legal obligations, leading to a safer and more secure world for America and its allies.