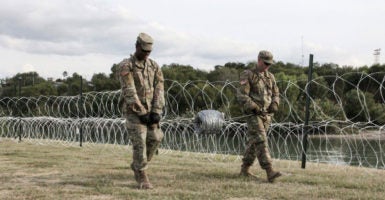 Soldiers from the Kentucky-based 19th Engineer Battalion work in a public park in Laredo, Texas, where they install barbed and concertina wire, Nov. 17, 2018. The soldiers are some of the thousands of U.S. troops deployed to the U.S.-Mexico border as part of a mission ordered by President Trump. (Photo: Thomas Watkins/AFP/Getty Images)

Evers issued an executive order Monday that withdraws 112 National Guard troops from their posts along the southern border. The first-term Democratic governor, while blasting President Donald Trump’s claims that a national crisis exists at the border, argued the issue is best left to Customs and Border Patrol.

“There is simply not ample evidence to support the president’s contention that there exists a national security crisis at our southwestern border,” Evers said in a statement Monday. “Therefore, there is no justification for the ongoing presence of Wisconsin National Guard personnel at the border. I cannot support keeping our brave service men and women away from their families without a clear need or purpose that would actively benefit the people of Wisconsin or our nation.”

Evers follows fellow first-term Democratic Govs. Gavin Newsom of California and Michelle Lujan Grisham of New Mexico in ordering their states’ National Guard off of the U.S.-Mexico border—moves that are meant to be an act of defiance against Trump’s immigration agenda.

“I reject the federal contention that there exists an overwhelming national security crisis at the southern border, along which are some of the safest communities in the country,” Lujan Grisham stated on Feb. 5. “New Mexico will not take part in the president’s charade of border fearmongering by misusing our diligent National Guard troops.”

The withdrawals come as national Democrats are mobilizing against Trump’s emergency declaration for the southern border. Both chambers of Congress will consider a resolution to block the president’s order, with such a vote surely to pass the Democratic-controlled House of Representatives. While a coalition of centrist Republicans in the Senate could possibly send the resolution to Trump’s desk, he has vowed to veto it.

The emergency declaration has allowed Trump to allocate a total of $8 billion in funds to construct a wall on the U.S. southern border — allowing him to fulfill his most touted campaign pledge.