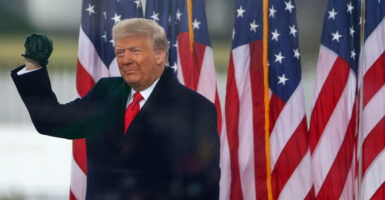 President Donald Trump assured the nation early Thursday that “an orderly transition” will occur now that Congress has certified the Electoral College vote in which Joe Biden defeated Trump to become the 46th president of the United States.

“Even though I totally disagree with the outcome of the election, and the facts bear me out, nevertheless there will be an orderly transition on Jan. 20,” Trump said in a formal statement posted on Twitter by Dan Scavino, White House deputy chief of staff for communications.

Scavino posted the statement at 3:49 a.m. following Congress’ certification of the Electoral College tally of 306 votes for Biden and 232 votes for Trump after lawmakers debated and rejected objections to electors from Arizona and Pennsylvania.

The joint session of Congress went into recess for more than six hours because of the breach of the Capitol, during which lawmakers were instructed to shelter in place as Capitol Police and other law enforcement agencies regained control of the building and grounds from a rampaging mob.

Those who broke into the Capitol and commandeered lawmakers’ offices and meeting rooms appeared to be a group that split off from the huge crowd that had just rallied to hear Trump speak on the Ellipse, the park just south of the White House.

“We will never give up. We will never concede,” Trump said at the “Save America Rally” before participants marched to the Capitol. “It doesn’t happen. You don’t concede when there is theft involved.”

Trump’s statement early Thursday came after Twitter and Facebook temporarily locked the president’s accounts on the social media platforms. The president, they said, violated their guidelines by “falsely” arguing that voter fraud and other irregularities prevented his reelection.

Facebook CEO Mark Zuckerberg announced Thursday morning that the president had been blocked from both Facebook and Instagram for at least two weeks, “until the peaceful transition of power is complete.”

Zuckerberg said Trump was paying the price for “use of our platform to incite violent insurrection against a democratically elected government.”

He will be sworn in as president at noon Jan. 20.