22 Photos and Videos of the Violence at the Capitol 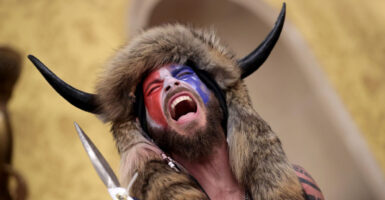 A protester screams "Freedom" inside the Senate chamber Wednesday afternoon after the U.S. Capitol was breached by a mob during a joint session of Congress. (Photo: Win McNamee/Getty Images)

Supporters of President Donald Trump gathered Wednesday in the nation’s capital to hold a March for Trump to “demand transparency and election integrity,” which subsequently turned violent.

While Congress was debating certification of the disputed results of the Electoral College vote making Joe Biden the next president, protesters stormed and entered the Capitol.

Here are 22 photos and videos of the violence.

2. Attacking the ‘brave men and women of the Capitol Police force’

(Editor’s note: There is adult language in this clip.)

4. Protesters fight with police outside the Capitol.

(Editor’s note: Adult language is used in this clip.)

6. Guns drawn in the House chamber

7. Disorder in the Capitol

8. A MAGA hat on statue of Gerald Ford

10. Protesters face off with police

12. The scene outside the Capitol

13. Protesters, police fight outside the Capitol

15. In the Senate chamber

16. Police outside the Capitol

20. A Confederate flag on display