We Must Heed Lincoln’s Warning About Mob Rule 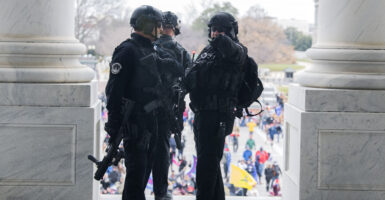 Capitol Police officers stand guard on the East Front before some broke into the Capitol to disrupt the joint session of Congress to certify the Electoral College vote on Wednesday, Jan. 6, 2021. (Photo: Tom Williams/CQ-Roll Call, Inc/Getty Images)

On Wednesday, as Congress convened to certify an Electoral College vote of the 2020 presidential election, a mass of people broke into the U.S. Capitol building in Washington, D.C.

They climbed the building, smashed windows, entered offices, and even entered the House and Senate chambers.

It was a bizarre scene, to say the least.

Taking selfies and engaging in photo ops from the House speaker’s chair certainly puts a modern twist on this 21st-century reenactment of the Vandals’ sack of Rome in 455 A.D.

But it wasn’t just window-smashing and photo ops. The intrusion also turned deadly.

A woman was shot and killed.

There will also be questions as to how a group of people, no matter how large, was able to push their way inside the Capitol and stay inside for several hours.

So, what’s to be made of all this?

The right to peacefully assemble and protest is an essential one guaranteed by the Constitution. Breaking into and vandalizing federal property—for whatever cause—is not.

Regardless of the original message of the protests, those who orchestrated the break-in to federal property deserve condemnation. It’s a violation of the rule of law, not to mention a federal crime.

Certainly, many on both the left and right came out quickly to condemn the violence.

It would, however, be a mistake to see what happened in isolation.

Let’s not forget that Washington, D.C.—as with many other cities across the country—had already been beset last year by mobs and waves of violent riots. When rioters lit fires, smashed windows, toppled statues, and physically and verbally assaulted political opponents in the name of Black Lives Matter this summer, the result was that a street was named for the movement in front of the White House.

Around the country, large swaths of cities were set ablaze as police departments became overwhelmed, and politicians did little to stop it.

A lawless “autonomous” zone was created in the middle of downtown Seattle, which led to widespread property damage and several deaths.

Many hopped aboard calls to defund the police, rather than defending the police while they were besieged.

And more than a few turned down federal aid when it was clear that things had spun out of control.

Portland, Oregon, had the highest spike of violent crime in the entire country—impressive given the nearly unprecedented national surge in violent crime.

That is the consequence of rampant lawlessness.

When Sen. Tom Cotton, R-Ark., dared to suggest in an op-ed in the pages of The New York Times that overwhelmed police departments should have the ability to request aid from the military, the Times newsroom rebelled, and he was called an authoritarian.

Yet, Cotton aptly called the lawless riots what they were: mob rule.

Mob rule, whether conducted by members of Black Lives Matter or people wearing MAGA hats, is a threat to law and order. Not only that, it’s a threat to liberty, too. It violates the very essence of the Constitution, of the belief that the people ultimately rule.

And as Abraham Lincoln warned in his famed 1838 Lyceum Address, mob law when left unchecked begets more mob law. When portions of the population think that violence is the path to victory, where the rules of the system don’t have to be followed, it is only natural for others to think that mob law is the law.

Under mobocracy, even those inclined to follow the law may eventually lose faith in the government.

Even if we believe that our system has become corrupted, that injustice rather than justice has prevailed, it is still the wiser course to appeal to ballots, protest, and petition rather than violence.

The American Revolution, which ultimately ended in war and the overthrow of British rule, was for the most part an orderly affair. Even within a system that did not provide representative government, the Founders appealed to law and negotiation first, second, and third before resorting to violence.

And once committed to revolution, they knew there was no going back.

We shouldn’t forget that the storming of the Bastille, as grave as the depredations of the French monarchy had sometimes been, led to mass violence and tyranny, not ordered liberty.

Most Americans understand this.

But make no mistake, unlike this summer’s riots—which countless media outlets distorted and misrepresented to excuse and minimize—there will absolutely be efforts to portray every Trump supporter as a violent insurrectionist. And politicians will use that to justify curtailing the God-given rights of citizens who disagree with them.

Many have condemned the intrusion and vandalizing of the Capitol Building, as they should, but we should also not forget the fact that mob rule and lawlessness have destroyed the lives of countless Americans over the past year and has eroded our country’s attachment to the rule of law.

This should have always been unacceptable.

Lincoln’s warning in 1838 was ignored, and a generation of Americans paid a terrible price in blood for it. Let us learn from the past instead of tearing it down.

Regardless of the corruption of our institutions, the better path forward is to support the rule of law, reform old institutions or build new ones, and plan for the long term of sustaining this federal republic that we would surely like to keep.