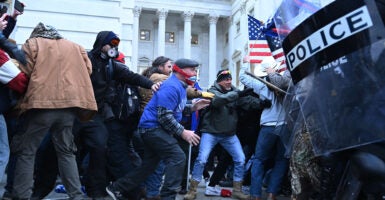 Rioters clash with police and security forces outside the U.S. Capitol in Washington on Jan. 6. (Photo: Brendan Smialowski/Agence France-Presse/Getty Images)

Republican lawmakers strongly condemned the mob that stormed the U.S. Capitol on Wednesday afternoon following a rally in support of President Donald Trump on the National Mall.

“Those who made this attack on our government need to be identified and prosecuted to the fullest extent of the law. Their actions are repugnant to democracy,” Sen. Lindsey Graham, R-S.C., wrote in a tweet Wednesday.

Rally attendees moved toward the Capitol around 1 p.m. after Trump completed his remarks to the crowd and as both chambers of Congress prepared to certify the presidential election results.

The rally, which drew thousands of Trump supporters, was held in Washington to protest Congress’ certification of the electoral slates, which would ratify former Vice President Joe Biden’s victory over Trump in the Nov. 3 election.

As protesters marched from the Mall to the Capitol, a group of Trump supporters became violent with law enforcement, removing several barricades as they forced their way up to the doors of the Capitol and then quickly broke inside.

The scene inside the Capitol quickly escalated as tear gas was released and windows were broken. A woman was shot in the neck and subsequently died.

Members of Congress were told to shelter in place in their offices as law enforcement sought to restore order to the Capitol.

Sen. Mitt Romney, R-Utah, derided the attack on the Capitol as “insurrection,” and blamed “a selfish man’s injured pride and the outrage of his supporters whom he has deliberately misinformed for the past two months and stirred to action this very morning.”

“What happened here today was an insurrection, incited by the president of the United States,” Romney said in a statement. “Those who choose to continue to support his dangerous gambit by objecting to the results of a legitimate, democratic election will forever be seen as being complicit in an unprecedented attack against our democracy.”

On Wednesday evening, Sen. Ben Sasse, R-Neb., released a statement criticizing Trump for not doing more to stop the violence.

“Today, the United States Capitol—the world’s greatest symbol of self-government—was ransacked, while the leader of the free world cowered behind his keyboard …,” Sasse wrote.

The Nebraska senator added that this is “not how we peacefully transfer power.”

“The American people are tough, our Constitutional order is strong, and we will meet this moment with strength and grace.”

Other GOP members of both chambers quickly condemned the mob Wednesday afternoon, reminding all Americans that violence and rioting are unacceptable.

Many lawmakers also thanked Capitol Police for their swift action to ensure their safety and contain the rioters.