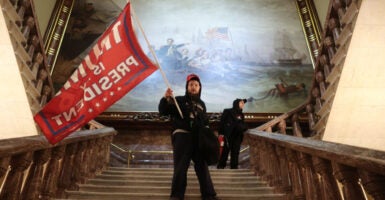 A protester holds a Trump flag Wednesday afternoon inside the Capitol near the Senate chamber. (Photo: Win McNamee/Getty Images)

Hundreds of protesters loyal to President Donald Trump made their way into the Capitol building Wednesday afternoon, interrupting lawmakers’ debate of the presidential election results and forcing the evacuation of Vice President Mike Pence as Capitol Police struggled to contain the situation.

Police had moved to block thousands of pro-Trump protesters from getting too close to the Capitol as lawmakers debated objections to a Electoral College count that would make Joe Biden the 46th president of the United States.

According to news reports, some inside the Capitol heard shots fired and video showed a woman bleeding on the floor.

Earlier, news footage showed protesters climbing the exterior walls of the Capitol and moving freely through the building.

Photos appeared to show Secret Service and police inside the House chamber, training guns at persons outside who had broken glass in the doors. Photos on social media showed protesters sitting inside private offices as well as what appeared to be the Senate chamber.

“I’ve never seen a group of protesters lay siege to the Capitol building,” Fox News Channel anchor Bret Baier said about 2:50 p.m. as reporters said police were concerned about the Senate and House chambers being breached.

As the day wore on, some on social media began to express doubt that all the trespassers were Trump supporters.

Shortly after 2 p.m., police “locked down” the Capitol in an effort to control the situation, Fox News Channel reported. Members of the House and Senate were expected to “shelter in place” while not being allowed to move about freely, Fox reported.

D.C. Mayor Muriel Bowser and House Speaker Nancy Pelosi called for the National Guard to be deployed. Just before 4 p.m., Bowser ordered a curfew in the city from 6 p.m. until 6 a.m. Thursday.

The FBI and other police agencies reportedly arrived to assist Capitol Police.

Police also temporarily evacuated at least one House office building after reports of one or more suspicious packages.

After hearing Trump speak earlier on the Ellipse, a park south of the White House, many of the president’s supporters marched over a mile to the Capitol grounds.

Capitol Police reportedly fired flash-bang grenades and some sort of gas at those who tried to get past barriers.

Inside, the House and Senate were hearing representatives and senators cite evidence of voter fraud and election irregularities in objecting to Electoral College votes for Biden from electors in Arizona, Georgia, and Pennsylvania.

Televised images at about 2:15 p.m. showed protesters moving up outside stairways and approaching the west front of the Capitol, which normally is off limits, Fox reported.

Calls grew for Trump to clearly call for an end to the trespassing and violence at the Capitol after he used Twitter to urge supporters to be peaceful and not hurt Capitol Police and other authorities.

Just after 4 p.m., Biden went on camera to call for Trump to address the nation on television and insist on order.