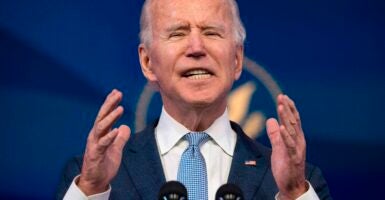 "This is not dissent, it's disorder, it's chaos. It borders on sedition, and it must end, now,” Joe Biden says in remarks Wednesday at the Queen Theater in Wilmington, Delaware, where he denounced the storming of the Capitol. (Photo: Jim Watson/AFP/Getty Images)

“This was a fraudulent election, but we can’t play into the hands of these people,” Trump said in a prerecorded video, recorded outside the White House and posted on Twitter at 4:17 p.m. “We have to have peace. So go home. We love you.”

Trump’s recorded remarks followed live remarks in Wilmington, Delaware, from his election opponent, Joe Biden, who urged the president to “step up” on national television and “demand an end to this siege.”

Tens of thousands had assembled for a rally on the Ellipse, a park south of the White House, to support Trump’s final effort to reverse the Electoral College vote count as Congress met for a joint session to count the votes.

Hundreds of those at the rally marched to the Capitol, where some broke windows and pushed through doors to enter the building.

A woman shot inside the Capitol during the chaos, reportedly by police, died from her wound. KUSI-TV News in San Diego, noting that it spoke with the woman’s husband, identified her as Ashli Babbit, a 14-year Air Force veteran and mother of four who lived in the San Diego area.

More than two hours after the violence at the Capitol began, Trump called for protesters to disperse. At one point in addressing supporters, the president appeared to refer to rioters and arsonists who had their way in major cities over the summer.

“You’re very special. You’ve seen what happens,” he said. “You’ve seen the way others are treated that are so bad and so evil. I know how you feel. But go home and go home in peace.”

“The 12-hour timeout also included the removal of three tweets and a warning that Trump could be subject to a permanent suspension if he continues tweeting baseless conspiracies about the election and inciting violence,” the Post reported.

When the Capitol was breached, the House and Senate were meeting in a joint session of Congress to certify the Electoral College results Dec. 14, in which Biden beat Trump by 306 votes to 232.

Senate and House Republicans were beginning to lodge objections to what they consider tainted results in Arizona, Georgia, and Pennsylvania when Capitol Police locked down the Capitol just after 2 p.m. as protesters pushed past barriers.

What began as a peaceful protest turned into a riot. The bulk of protesters, however, remained outside the building and didn’t try to break in.

Trump, who spoke in person at the “March for Trump” earlier in the day, expressed sympathy for their passions in his video:

It’s a very tough period of time. There has never been a time like this where such a thing happened, where they could take it away from all of us, from me, from you, from our country.

As darkness began to fall just before 5:30 p.m., protesters appeared to be streaming away from the Capitol. D.C. Mayor Muriel Bowser imposed a curfew from 6 p.m. until 6 a.m.

Minutes before Trump’s prerecorded comments were posted on Twitter, Biden–the former vice president who was mostly silent during the summer and fall when rioters looted and burned businesses and attacked individuals–condemned what he called the “God-awful display” at the Capitol.

“I call on this mob to pull back and allow the work of democracy to go forward,” Biden demanded. “President Trump, step up.”

“What we’re seeing are a small number of extremists dedicated to lawlessness. This is not dissent, it’s disorder, it’s chaos. It borders on sedition, and it must end, now.”

He added: “It’s not a protest. It’s an insurrection.”

The certification of the Electoral College vote is supposed to be a sacred ritual [where the] purpose is to affirm the majesty of American democracy. Today’s reminder [is] a painful one, that democracy is fragile and to preserve it requires people of goodwill, leaders with the courage to stand up, who are devoted not to the pursuit of power or for the personal interest pursuits of their own selfish interests at any cost, but of the common good.

This report has been updated since publication to include Twitter’s locking of Trump’s account and a news outlet’s identification of the woman who was fatally shot inside the Capitol.