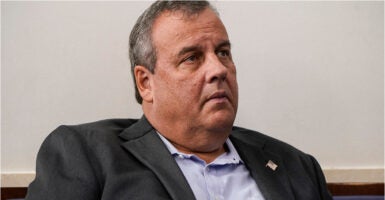 “This kind of thing, all it does is inflame without informing, and we cannot permit inflammation without information,” former New Jersey Gov. Chris Christie says of President Donald Trump’s claims of election fraud. Pictured: Christie listens as Trump speaks during a news conference in the Briefing Room of the White House Sept. 27, 2020, in Washington, D.C. (Photo: Joshua Roberts/Stringer/Getty Images)

“I saw the president’s speech last night and it was very hard to watch,” Toomey said on “Today” Friday morning. “The president’s allegations of large-scale fraud and theft of the election are not substantiated. I’m not aware of any significant wrongdoing here.”

This is GOP Senator @PatToomey from Pennsylvania:

“The president’s allegations of large-scale fraud and theft of the election are just not substantiated. I’m not aware of any significant wrongdoing here.” https://t.co/LwISqBOYSV

Toomey’s comments were echoed by Christie, also a Republican, who on Thursday likened Trump’s comments to a prosecutor indicting somebody without any evidence.

“It’s his right to pursue legal action,” Christie said, “but show us the evidence. We heard nothing today about any evidence.”

Chris Christie says it’s Trump’s “right to pursue legal action, but show us the evidence. We heard nothing today about any evidence.”

“This kind of thing, all it does is inflame without informing, and we cannot permit inflammation without information.” https://t.co/GwwRl4EUb3 pic.twitter.com/d8EZc9rDIy

Their comments were in response to Trump’s remarks Thursday evening, when he said that he would have “easily” won if only the “legal votes” were counted and made multiple baseless claims alleging widespread fraud against him.

“If you count the illegal votes, they can try to steal the election from us,” Trump added.

Trump pointed to Wisconsin, Michigan, Pennsylvania, and Georgia, noting how he held large leads in each state only to lose them in the days after Nov. 3, alleging fraud as a result.

Wisconsin and Michigan were called by most outlets Wednesday, and Democratic nominee Joe Biden took narrow leads in Pennsylvania and Georgia on Friday morning with votes still to be counted in each state.

Trump’s lead disappeared not because of fraud, a multitude of reporters and elections experts have said, but because of large amounts of mail-in ballots tallied after Election Day.

Not only did Democrats vote by mail at far higher rates than Republicans, multiple reports have noted, but the votes left to be tabulated came from urban and suburban areas like Detroit, Philadelphia, and Atlanta, election officials in each state repeatedly said.

ABC, NBC, and MSNBC all cut away from Trump’s remarks shortly after they began. Shepard Smith did the same on CNBC, saying that the network did so “because what the president of the United States is saying, in large part, is absolutely untrue.”