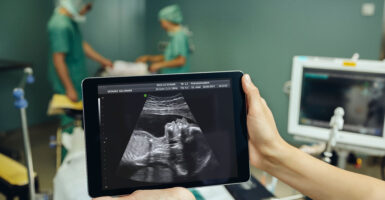 The Republican and Democratic nominees for president couldn’t differ more in their approach to the issue of abortion.

Depending on which candidate emerges victorious, in the weeks to come, the landscape of abortion policy in the United States will look dramatically different.

Their differences are apparent in a number of key areas:

Trump—both as a candidate and as president—has shared the types of individuals he would appoint to the Supreme Court.

The president has stated that jurists in the vein of the late Justice Antonin Scalia, an originalist and a textualist, who was unwilling to legislate from the bench, represent the kind of constitutional principles he values.

Biden has said that he wouldn’t release a list of potential nominees for the high court. However, he has pledged to appoint judges who would precommit to upholding Roe v. Wade, which legalized abortion on demand nationwide in 1973.

Furthermore, Biden has gone on record stating that he would support congressional action to codify Roe into permanent law.

Trump opposes taxpayer-funded abortion, and he supports the Hyde Amendment, which has long prohibited the use of certain federal funds for most abortions. As president, he has enacted regulations to strengthen pro-life protections in domestic programs, such as the federal Title X family planning program and the Affordable Care Act.

Biden expressed in 2019 that he no longer supports the Hyde Amendment, though he had previously supported the policy throughout his time in public office. Biden has committed to rescind many of the Trump administration’s anti-abortion regulations that were promulgated in recent years.

As president, Trump has enacted reforms, such as the Protecting Life in Global Health Assistance policy (an expanded form of the Mexico City Policy), which disentangles foreign aid dollars from international abortion activity.

Under his administration, the United States has reaffirmed that there is no international right to abortion, nor an obligation on any state to pay for or facilitate abortions.

Biden has committed to rescinding the Protecting Life in Global Health Assistance Policy, which would result in U.S. taxpayer dollars being entangled with nongovernmental organizations that perform or promote abortion overseas.

Trump has enacted a number of policies that protect freedom of conscience and religious freedom, including moral and religious exemptions to the Affordable Care Act’s mandate that nearly all health care plans must cover contraception and abortion-inducing drugs and devices.

Biden has criticized the fact that the Supreme Court has not struck down the administration’s regulation providing relief from the Affordable Care Act’s contraception mandate. He has also committed to reversing the exemptions from the mandate.

Trump has urged Congress to pass the Pain-Capable Unborn Child Protection Act, which would protect women and their unborn children from abortions performed after 20 weeks, at which point scientific evidence suggests that the baby is capable of feeling pain during an abortion procedure.

The president has also urged Congress to pass the Born-Alive Abortion Survivors Protection Act, which would augment current law by including criminal consequences for health care providers who do not provide proper medical care to an infant born alive after an abortion attempt.

In October, Trump signed an executive order to protect vulnerable newborn and infant children, including infants who survive an abortion, are born extremely prematurely, or infants who are disabled by ensuring that entities that receive certain federal funds fully comply with current obligations under federal law.

Biden says that he wants Roe v. Wade to be codified into federal law. Under the abortion scheme that is in place due to Roe v. Wade and its companion case Doe v. Bolton—as well as Planned Parenthood v. Casey, which further reshaped abortion jurisprudence—abortion is permitted in the United States throughout pregnancy for almost any reason.

Codifying Roe would foreclose opportunities by states and the federal government to enact policies that restrict abortion or enforce various health and safety standards for abortion providers.

The Contrast Is Clear

Abortion remains a perennial point of contention in public policy, the courts, and culture more broadly. The difference between the presidential candidates on the issue of abortion is stark.

Trump has committed to pursue policies that protect unborn life, whereas Biden has expressed his intention to expand pro-choice policies.

The dissimilarity in each candidates’ approach to abortion is a clarifying contrast for voters as they elect a leader for the next four years.