Good News for Americans Who Object to Obamacare’s Contraception Mandate 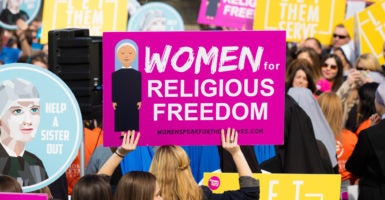 Supporters of the Little Sisters of the Poor stand outside the Supreme Court during oral arguments in Zubik v. Burwell, March 23, 2016. (Photo: Jeff Malet Photography/Newscom)

Those who cherish religious liberty can celebrate a major victory this week.

On Wednesday, the Department of Health and Human Services published final rules that provide much-needed relief from one of Obamacare’s most egregious assaults on rights of conscience and religious liberty: the mandate that nearly all health insurance plans cover abortion-inducing drugs and contraception.

According to guidelines issued by Health and Human Services following Obamacare’s enactment, insurance plans must include all Food and Drug Administration-approved contraceptive methods and sterilization procedures, which include certain abortion-inducing drugs.

In other words, the statutory text of Obamacare itself does not require that plans cover contraceptives. That policy detail, among others, was left to the discretion of the executive branch. Furthermore, plans that already covered millions of women were “grandfathered” and exempted from the requirement to provide preventive services with no cost-sharing.

But other religious employers like hospitals, schools, social service organizations, and even businesses remained responsible for complying with the mandate, notwithstanding their sincere moral or religious objections.

The Supreme Court gave relief to closely held businesses in Burwell v. Hobby Lobby, and to certain other religious institutions in Zubik v. Burwell. Yet many individuals, employers, and organizations are still subject to the mandate.

In October 2017, the Trump administration issued interim final rules—very similar to the ones finalized this month—that finally provided an adequate moral and religious exemption for those who objected to the mandate. Those rules were designed to go into effect immediately, with a public comment period following, but they were blocked from being implemented in court.

The finalized rules issued this month take into account the public comments that were received since the interim final rules were issued, and the changes made are technical in nature.

The administration estimates that the exemptions should affect “no more than approximately 200 employers with religious or more objections, with many entities not being affected because they were already permitted not to cover contraception under the previous rules, or are protected by permanent court injunctions.”

The estimated number of women whose coverage may be affected is 6,400—a fraction of the 165 million women in the United States.

Many on the left are characterizing the rules as denying women access to contraception. In reality, they do no such thing. Rather, they allow those with objections to not be complicit in choices that would violate their religious or moral convictions.

Women will remain free to make their own decisions about the drugs and devices listed in the mandate, and will be able to purchase or find coverage for them without trampling on the sincere moral or religious objections of those who wish not to be implicated in subsidizing them.

Moreover, these rules leave untouched the multitude of programs that subsidize contraception for women at the federal, state, and local levels.

The rules simply mean that groups like the Little Sisters of the Poor, an order of Catholic nuns committed to serving the elderly poor and who operate 30 homes in the United States, will not be forced to be involved in the provision of employee health insurance that covers drugs and devices that directly contradict their religious convictions.

You don’t have to share the beliefs of people like the Little Sisters to recognize that the government should not be able to force Americans to set aside their moral and religious convictions when they serve the poor, heal the sick, or educate the next generation outside the four walls of a church.

America has a proud tradition of respecting the rights of conscience, which enable us to act in harmony with our sincerely held beliefs in the public square. The final rules issued by the Trump administration recognize this foundational principle and give much-needed, meaningful relief from an unnecessary assault on the rights of conscience.