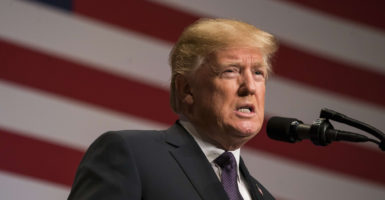 A federal judge in Pennsylvania has issued a preliminary injunction blocking the Trump administration from implementing rules that would have provided much-needed relief to those with religious or moral objections to Obamacare’s Health and Human Services mandate. (Photo: Jim LoScalzo /CNP/AdMedia/SIPA/Newscom)

Once again, an unelected judge is trying to undo the Trump administration’s actions.

Late Friday, a federal judge in Pennsylvania, Wendy Beetlestone, issued a preliminary injunction blocking the Trump administration from implementing rules that would have provided much-needed relief to those with religious or moral objections to Obamacare’s Health and Human Services mandate, which requires that nearly all insurance plans must cover abortion-inducing drugs and contraception.

The injunction was issued in a lawsuit challenging the Trump administration rules brought by the state of Pennsylvania.

The mandate is a burden on employers, individuals, and religious organizations who, because of their beliefs concerning the protection of unborn human life, are faced with the decision to violate sincerely held religious or moral beliefs, pay steep fines, or forgo offering or obtaining health insurance entirely.

Now let’s be clear: Very few people will be affected by the Trump administration’s exemption to the mandate. As previously explained at The Daily Signal:

The administration calculates that the rules will affect the roughly 200 employers that previously filed lawsuits or object to the mandate on religious or moral grounds, and ‘the number of women whose contraceptive costs will be impacted by the expanded exemption … is less that 0.1 percent of the 55.6 million women in private plans receiving preventive services coverage.’ In other words, nearly all women in the United States will be unaffected by the rule.

Nor do the new exemptions affect the many existing programs that subsidize contraception at the local, state, and federal level. Moreover, the rules outline, at length, the various ways that women will remain free to make their own decisions about, and purchase or find coverage for, contraception. The only thing the exemption does is to exempt those with objections from coercion to be complicit in choices that would violate their religious or moral convictions.

In issuing the rules, the Trump administration provided meaningful relief to those who have spent years raising objections to one of Obamacare’s most egregious assaults on rights of conscience and religious liberty.

Predictably, as soon as the administration issued the rules, left-leaning states and organizations filed suit.

Pennsylvania alleges that the administration violated the Administrative Procedure Act by issuing the rules as “interim final rules” (meaning they went into effect immediately) rather than promulgating through the notice-and-comment process and that the rules were “arbitrary, capricious, or not in accordance with law.” The state also raised constitutional issues, though those were not addressed by the judge in Friday’s ruling.

But Pennsylvania is overlooking a key fact: The Administrative Procedure Act provides for a “good cause” exception to the typical notice-and-comment period of rule-making, which is a time-consuming, months-long process.

To justify issuing the rules as interim final rules, the administration explained that it met the Procedure Act’s “good cause” exception because additional delay was contrary to public interest, that the rules would help resolve ongoing litigation surrounding the HHS mandate, and that agencies have already received a significant number of comments on this issue during multiple rounds of rule-making in previous years.

However, the judge agreed with Pennsylvania and held that the administration did not provide adequate justification to use the Administrative Procedure Act’s good cause exemption.

Beetlestone also agreed with Pennsylvania’s allegation that the rules are not in accordance with the law by claiming that Obamacare doesn’t contain language allowing agencies to create sweeping exemptions to the preventive services coverage requirements, despite the fact that during the Obama administration agencies went through multiple rounds of rule-making to establish exemptions to the mandate.

The judge gave short shrift to the Trump administration’s argument that this new rule is necessary to comply with the Religious Freedom Restoration Act—a federal law that protects Americans from substantial burdens on religious freedom unless the government can show it has a compelling interest and does so in the least restrictive way possible.

Citing prior rulings by the federal 3rd U.S. Circuit Court of Appeals, Beetlestone noted that though the Religious Freedom Restoration Act required exemptions from the HHS mandate for churches and their integrated auxiliaries, other exemptions were not required under the law.

But if that’s true, why did the Supreme Court order the Obama administration to effectively provide an exemption to the Little Sisters of the Poor (which is not a church or integrated auxiliary) in their 2016 case?

The opinion also contained this troubling line: “[The rule] would allow an employer with a sincerely held moral conviction that women do not have a place in the workplace to simply stop providing contraceptive coverage” and “impose its normative construct regarding a woman’s place in the world on its workforce.”

Beetlestone continued, “It is difficult to comprehend a rule that does more to undermine the contraceptive mandate or that intrudes more into the lives of women.”

This belittles the sincere views of deeply religious individuals like the nuns who make up the Little Sisters of the Poor and others that have fought for their religious beliefs. These organizations are not asking to stop hiring women—but to not violate their beliefs by providing abortion-inducing drugs or contraceptives.

Friday’s ruling is unfortunate and wrong. Becket, a law firm that litigates religious freedom cases (including cases involving the Little Sisters of the Poor), points out that “Pennsylvania never challenged the Obama administration for creating much larger exemptions for secular corporations—exceptions that covered tens of millions more people” compared to the Trump administration’s religious and moral exemptions. In fact, the Obama administration exempted the health plans of 1 in 3 Americans.

Becket also notes that Pennsylvania “does not identify a single real person who previously had contraceptive coverage but will lose it” because of the Trump administration’s action.

Becket is right. The government can facilitate contraceptive coverage for women who want it while also protecting groups like the Little Sisters of the Poor.

As this case and similar cases make their way through the courts in the months to come, it’s worth remembering: Every day that individuals, employers, and religious organizations are forced to choose between complying with the mandate or violating their sincere moral or religious beliefs is an affront to the religious liberty of all Americans.