Trump Has Vowed to Eradicate MS-13. What You Need to Know About the Gang. 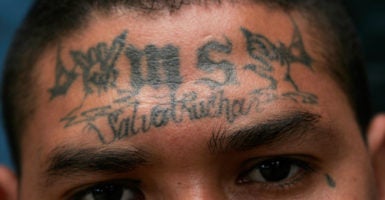 The MS-13 gang was originally born on the streets of Los Angeles, but arrived in El Salvador in the early 1990s as many of its ranks were being deported back to their home country by the U.S. government. (Photo: Adriana Zehbrauskas/Polaris/Newscom)

In describing its effort to enforce immigration laws aggressively, the Trump administration repeatedly has invoked the threat of MS-13, a violent international gang with ties to Central America.

The Democrats don't want money from budget going to border wall despite the fact that it will stop drugs and very bad MS 13 gang members.

Responding to a recent surge of violence linked to MS-13 on Long Island, New York—punctuated by the April 13 discovery of four men killed near a public park—U.S. Attorney General Jeff Sessions visited with local law enforcement late last month, and vowed to eradicate the gang by cracking down on illegal immigration.

“The MS-13 motto is kill, rape, and control,” Sessions said at the U.S. Courthouse on Long Island. “Our motto is justice for victims and consequences for criminals. That’s how simple it is. Prosecute them, and after they’ve been convicted, if they’re not here lawfully, they’re going to be deported.”

In interviews with The Daily Signal, law enforcement experts who study MS-13—and have been working to help combat it—welcomed President Donald Trump’s tough approach to the gang, but cautioned that the federal government should not lose sight of other violent gangs with footprints in the U.S.

According to the FBI’s most recent statistics, there are about 33,000 active gangs in the U.S., with about 1.4 million members.

“The threat of MS-13 and their violence is real enough, but they are not the only gang in town,” said Wes McBride, the executive director of the California Gang Investigators Association, in an interview with The Daily Signal.

Experts such as McBride, who served 28 years in the gang unit of the Los Angeles Sheriff’s Office, say that immigration enforcement is only one element of a strategy that the U.S. has waged for decades against MS-13.

“People tend to talk about MS-13 as a gang of illegals, and it sort of is, but a lot of them now were born here, so they are second generation,” McBride said. “This is a long-term problem without a simple solution.”

Mara Salvatrucha, known as MS-13, originated in Los Angeles in the 1980s, when thousands of people from El Salvador, a country of Central America’s northern triangle, fled civil war.

A 2008 Congressional Research Service report describes MS-13’s early membership as consisting of former guerillas and El Salvadoran government soldiers with combat experience. Those initial members helped the gang develop a reputation of using unusual methods of violence—most prominently, its choice of machetes as a murder weapon. 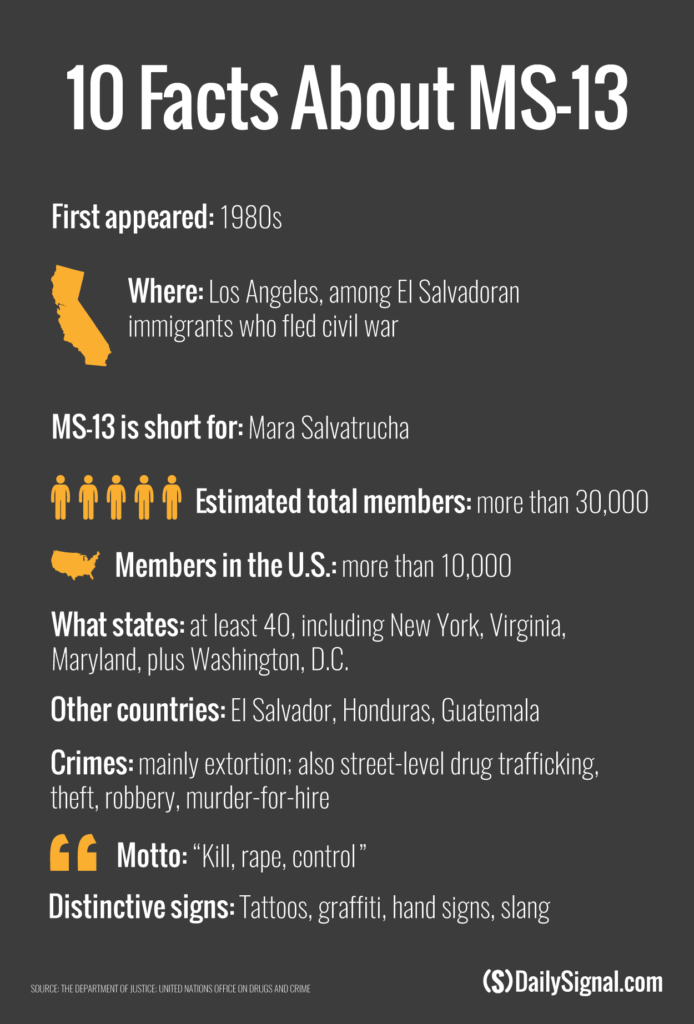 Eric Olson, the associate director of the Latin America program at the Wilson Center, said the new arrivals from El Salvador formed MS-13 as a form of self-preservation to compete with other Los Angeles-based gangs.

“The Salvadorans were suddenly confronted with Mexican gangs in the high schools, and African-American gangs, so almost as a self-protection thing, they formed cliques and gangs,” Olson told The Daily Signal.

Olson and other experts say MS-13 expanded when, in the mid-1990s, the U.S. government changed immigration law to hasten deportation of the gang’s members back to El Salvador.

MS-13 became the first street gang to be labeled a “transnational criminal organization”—one that operates internationally—by the U.S. government.

“While many of the gang members eventually got deported, they had to reconfigure themselves in El Salvador, and so you had a very vulnerable population fall back on their larger gang family [there] as a protection mechanism,” Olson said. “MS-13 became bigger and more powerful in El Salvador.”

Nelson Arriaga, president of the International Latino Gang Investigators Association, which provides training to law enforcement conducting anti-gang operations, says the U.S. government did not give proper support to Salvadoran authorities who were ill-equipped to handle the return of their troubled nationals.

“Law enforcement in Central America were completely oblivious to the criminal element being exported from the U.S. to those countries, and to the level of sophistication gang members were bringing with them,” Arriaga told The Daily Signal in an interview.

“Those countries were fertile for gang proliferation.”

As MS-13 grew its ranks from deportees returning from the U.S. to El Salvador, members also migrated back to the U.S.

“When we started deporting them, some would turn around and come right back,” McBride said. “It became a circular problem.”

Today, the Justice Department estimates that MS-13 has roughly 30,000 members worldwide and more than 10,000 in the U.S. MS-13 is active in 40 states plus the District of Columbia, the department estimates, with an especially significant presence on the East Coast, in New York, Virginia, and Maryland.

While Trump has blamed the Obama administration’s less strict immigration policies for MS-13’s growth, a Justice Department fact sheet, dated April 18, credits “great progress made” by federal, state, and local law enforcement in “diminishing” and disrupting the gang’s impact during 2009 and 2010.

Indeed, McBride says he does not blame the Obama administration for the spread of MS-13. The California gang expert notes that President Barack Obama’s Treasury Department in 2012 sanctioned the gang as a transnational criminal organization.

In January 2016, the Justice Department indicted 56 MS-13 members in the Boston area on federal racketeering conspiracy charges, some related to murder, conspiracy to commit murder, attempted murder, and drug trafficking. In March of this year, the U.S. Attorney’s Office for the Eastern District of New York indicted more than a dozen MS-13 members in seven killings on Long Island spanning three years, including the deaths of several high school students last year.

The FBI started an MS-13 National Gang Task Force in 2004 to coordinate the investigative efforts of federal, state, and local law enforcement agencies against the gang.

Arriaga, a retired sergeant in the Inglewood Police Department who focused on gangs, says the FBI and U.S. Immigrations and Customs Enforcement agents today are embedded in Central America to help local police in those countries deal with the MS-13 threat.

“The MS-13 threat in Central America is on steroids compared to the threat here,” Arriaga said. “It’s good to see the Trump administration making greater emphasis of MS-13, but the enforcement aspect of this has already been there.”

Gang members in the U.S. have preyed on recent arrivals from Central America, many of them teenagers who traveled here alone in a surge of illegal immigration from El Salvador, Honduras, and Guatemala over the past few years.

“The best way to tackle the problem is to convince young people to stay away from the gangs,” Sessions said during his April 28 speech in Long Island.

While MS-13, which has a decentralized structure with little coordination, is not considered a major player in international drug smuggling, Olson said, the gang uses extortion to control local drug markets.

“Extortion is really their bread and butter, so if you are in a poor neighborhood and your job isn’t paying enough, or you don’t have a job and sell tortillas on the corner, [MS-13] force you to pay a tax,” Olson said. “They are extorting all economic activity. Their control of legal markets and extortion is absolute. And when they are in conflict with one another and the police, they become extraordinarily violent.”

Olson called for a multipronged strategy to defeat MS-13:

It’s not like removing a tumor, where you can cut it out and it’s gone. It stays here. Anti-gang work in the U.S. and in Central America needs to go way beyond simply trying to deport and incarcerate people. I wouldn’t say border security won’t have any impact. It’s already had a big impact. It’s one element of an overall challenge.