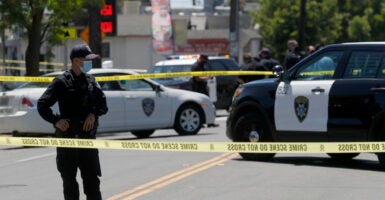 The good news (which really is also bad news) is that the Biden administration has finally been forced to acknowledge and admit that the surge in violent crime—especially the surge in homicides in many cities—is a problem.

The bad news is that the Biden administration’s solution to this problem is really nothing more than a smoke screen to give it political cover.

To start with, President Joe Biden’s policy to combat violent crime doesn’t even mention the place he has allowed violent crime to fester—the southern border.

Yes, Vice President Kamala Harris has finally agreed to visit the border months after being appointed the “border czar,” and only a few days before Texas Gov. Greg Abbott and former President Donald Trump have said they will tour it, but a mere photo-op doesn’t solve anything.

As FBI Director Christopher Wray recently made clear, the chaos at the border is causing a crisis that is allowing drug smuggling, human trafficking, and gang activity to flourish there—and to spread elsewhere, too.

And unfortunately, when it has sprung up or spread elsewhere, police officers—who have been demonized and demoralized for much of the past year—and rogue prosecutors backed by left-leaning liberal billionaires like George Soros, who have refused to do their jobs and enforce the laws on the books, are the ones confronting it.

Is it any wonder we’ve seen a spike in violent crime? The unfortunate reality, as we have previously written, is that it’s often the poor and minority members of society who are forced to disproportionately bear the burdens of violent crime.

That’s why Biden’s so-called Comprehensive Strategy to Prevent and Respond to Gun Crime and Ensure Public Safety is so galling. The hypocrisy is right there—if you know what you’re looking at.

While he pays lip service to providing “law enforcement [with] the tools and resources needed to tackle gun violence,” it’s a hollow promise.

Why? He’s partnering with and empowering many of those who view our criminal justice system as being systematically racist and who have been working to undermine it by supporting rogue prosecutors around the country—including in places like Chicago and St. Louis where violent crime casualties rival those you would expect to see in a war zone.

Among the philanthropies who supposedly have been “leaders” on enhancing “public safety for children, families, and communities and to advance equity” is the Soros-founded-and-funded Open Society Foundations. In other words, some of Biden’s partners have been working to undermine the system from within through the election of rogue prosecutors.

So rather than proposing harmful gun control measures such as banning assault weapons—a category of weapon Biden’s own nominee to be the director of the Bureau of Alcohol, Tobacco, Firearms, and Explosives had difficulty defining—and banning high-capacity magazines, both of which are nothing more than political moves designed to please his base, Biden should proactively empower police to do their jobs and encourage local district attorneys to do theirs too by prosecuting crimes.

He should make clear that if they do not, U.S. attorneys around the country will step into the breach as they did during the Trump administration.

To be fair, Biden’s proposed crackdown on gun dealers who “willfully violate existing laws and regulations” is a good starting point (although it likely won’t stop the flow of guns on the black market). It is much better that federal authorities should start aggressively enforcing existing laws than trying to enact new, more restrictive measures.

The sad reality right now is not that the deer are wearing Kevlar vests, as Biden joked, but that maybe the children walking down the street in many of our nation’s cities should be.

When we put it in those terms, maybe Biden will realize that this is no joking matter.