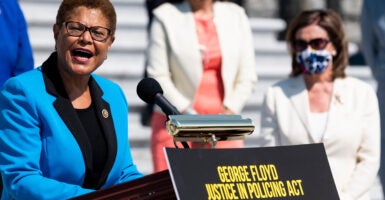 The criminal justice system and potential reforms to it have been at the forefront of the national conversation for much of the past year.

Unfortunately, when tragic events such as the death of George Floyd in Minneapolis last May occur, as my colleague John Malcolm has written, “it is often the police who suffer the greatest backlash, both in threats to their own physical safety and in growing distrust from some in the communities they are sworn to serve and protect.”

Unfortunately, the George Floyd Justice in Policing Act of 2021 that the House of Representatives passed 220-212 on March 3 entirely along party lines (and with two Democratic congressmen joining Republicans in voting against the bill) will do little to combat those problems—and could make them worse.

The bill would take away tools that help keep police officers safe by limiting the ability of local law enforcement agencies to receive surplus military equipment, and it bans the use of no-knock warrants in drug cases at the federal level and prohibits state and local governments that allow them from receiving certain federal grants.

While the use of those types of warrants should be extremely limited, banning them removes an important officer-safety tool that might be appropriate in certain dangerous situations, such as when federal agents and local law enforcement officers raid drug dealers’ “stash houses,” which can be manned by heavily armed, violent gang members.

On top of that, the bill imposes new standards for when it is appropriate to use deadly force. Those standards could cause officers to hesitate in critical situations, especially since the bill provides that if they didn’t stringently follow its requirements or if their own “gross negligence” contributed to the use of such force, they can’t use justification as a defense.

It lowers the mens rea requirement from “willfully” to “knowingly and recklessly” for someone to be prosecuted under a federal civil rights law for using their official positions to violate someone’s rights—legally speaking, depriving someone of their rights under color of law.

It also would broadly expand actions that can be prosecuted under this bill, including any maneuver that “reduces intake of air” to someone being detained. That provision potentially covers a broad swath of conduct, even accidental or unintentional conduct, especially when viewed in conjunction with the lowered mens rea requirement.

Meanwhile, others, such as university administrators, who are able to make much more considered decisions, can still raise it to avoid a lawsuit—for example, when they are accused of violating students’ First Amendment rights.

The bill would also require the Justice Department to create a national registry for police-misconduct complaints (and not just official findings of misconduct), but fails to provide adequate safeguards to avoid sensitive information about officers from being disseminated.

Most troublingly, perhaps, the legislation would force police departments to consider an individual’s protected characteristics, such as race or gender, when engaging in most law enforcement interactions—in plain contravention of its goal of ending racial profiling.

The bill provides that “[p]roof that the routine or spontaneous investigatory activities of law enforcement agents in a jurisdiction have had a disparate impact on individuals with particular characteristics described in [the bill] shall constitute prima facie evidence of a violation … .”

That would essentially establish a de facto quota system for traffic stops, pedestrian stops, interviews, and other investigatory activities, and could encourage officers and departments to “game the system” by stopping more individuals with certain types of characteristics—specifically, women, whites, or Asians—than they otherwise would.

Other provisions of the bill could potentially encourage frivolous lawsuits against police officers and departments, given the broad scope of activities covered, the disparate-impact analysis required, and the fact that a “prevailing party” will be awarded attorney’s fees.

Police departments would also be more concerned about litigation, potentially at the expense of engaging in law enforcement activities, because the bill increases the authority of the attorney general to conduct pattern-and-practice investigations, and it provides new tools and causes of action for state attorneys general to conduct pattern-and-practice investigations, too.

Those aren’t necessarily bad in and of themselves, but they might be difficult to implement in practice and divert important resources from law enforcement officers on the street.

The bill also makes clear that an individual in the custody of an officer cannot consent to sexual contact with that officer or other officers, and makes it a federal crime for a law enforcement officer to engage in sexual conduct with someone in his or her custody.

Of course, those latter provisions likely could pass easily if not paired with those other provisions that make the lives of law enforcement officers needlessly difficult and dangerous.

There are smart criminal justice reform measures that Congress can take, but the George Floyd Justice in Policing Act of 2021 misses the mark. Hopefully, it will meet the same fate as a predecessor bill last year and not pass the Senate.