Unrelated Amendments in COVID-19 Relief Bill Only Add to Overcriminalization 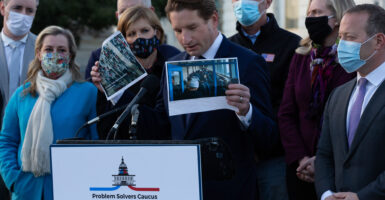 Congress is very good at two things: spending money and thinking up duplicative—and, therefore, unnecessary—ways to criminalize many aspects of our daily lives.

The latest COVID-19 relief bill does both.

As for the former, the $900 billion price tag speaks for itself. As for the latter, the new bill tackles the issue of illegally streaming copyrighted works for profit.

Protecting intellectual property is important, but putting this provision in a bill filled with pork makes it look like more of the same.

For one thing, as far as we can tell, it’s not related to COVID-19 or providing solutions to any of the myriad problems stemming from the pandemic. Maybe too many people have been bingeing on their favorite shows for free during the lockdown?

We joke, of course, but the manner in which the COVID-19 relief bill was passed, with members of Congress being given only a few hours to “read” its more than 5,500 pages, and the fact that many unrelated provisions, such as this one, were included, invite problems to occur.

Specifically, in the context of overcriminalization, is it any wonder that so many unnecessary federal crimes exists? For decades, Congress has been creating new crimes so that members can appear to be solving the latest crisis.

Scholars have been studying this phenomenon (see, for example, here, here, here, and here), but nobody—not the scholars, not Congress, not the Justice Department—knows just how many federal crimes exist.

That matters because, in many cases, no citizen can know what the law demands of him or her.  What’s more, many of these crimes are regulatory in nature and not intuitive—meaning, we can’t avoid committing them simply by exercising good judgment.

For example, did you know that it’s a federal crime to save an injured woodpecker’s life, or to attempt, even unsuccessfully, to find arrowheads on federal land?

The list goes on and on, and many of those crimes are equally as nonsensical. Unfortunately, they aren’t hypothetical. In each of the examples listed above—and scores of others—real people have faced criminal punishments for conduct no reasonable person could have known was criminal.

And even where someone’s conduct is harmful and should be criminally punished, there’s likely already a federal or state criminal law on the books that can cover it.

Take illegal streaming for commercial profit, for example. The new bill seeks to tackle it. But in 2019, the U.S. Attorney’s Office for the Eastern District of Virginia brought charges against eight individuals who were “running two of the largest unauthorized streaming services in the United States, resulting in the loss of millions of dollars by television program and motion picture copyright holders.” Two have entered guilty pleas, and the others are currently set for trial.

To be fair, there is an argument that some subset of felony-level criminal copyright infringement cases might be hard to prove under the existing statutes, though even then the illegal streaming for commercial profit would still—at a minimum—be misdemeanor offenses, where in appropriate circumstances, the judge could run the sentences for each count consecutively rather than concurrently.

But in a rare and welcome move, Congress also used the COVID-19 relief bill to eliminate several silly and unnecessary crimes.

It’s only a handful—and, again, they’re unrelated to COVID-19 relief—but it’s a start.

The bill repeals laws that had criminalized transporting water hyacinths; affixing a theft-prevention device to a car without authorization; receiving a former spouse’s federal benefits after marriage; and using without permission the 4-H Club, “Smokey Bear,” or “Woodsy Owl” logos, the Swiss Confederation coat of arms, or “the Golden Eagle Insignia.”

That’s a good development, so kudos for that. But let’s face it, it’s a token gesture at best. With thousands of crimes on the books and more added all the time, more significant efforts are required.

For example, Congress, the executive branch, or both, should immediately count all the crimes that exist.

Congress and state legislatures should pass a mens rea (Latin for “guilty mind”) reform bill, such as the one proposed by former Sen. Orrin Hatch, that would prevent unsuspecting Americans from going to prison for unknowingly violating regulatory crimes.

And Congress and state legislatures should consider passing a law providing a mistake-of-law defense for violations of the most arcane criminal laws that no reasonable person could hope to be aware of.

Until the government gets serious about this problem, however, we can expect to see more of the “one step forward, one step backward” approach that was evident in the COVID-19 relief bill.

That’s no way to govern.