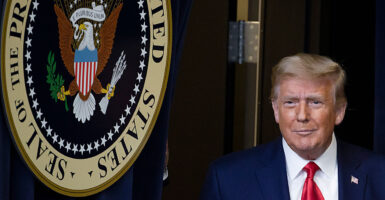 The Trump administration's last-minute executive order recognizes what scholars from both sides of the political aisle have observed for decades: that federal criminal law is far-reaching, unintuitive, and difficult to understand. (Photo: Tasos Katopodis/Getty Images)

The last few days of an administration often see a flurry of executive orders. The Trump administration is no exception, and former President Donald Trump is making the most of this tradition.

Let’s hope President Joe Biden doesn’t undo it, because this policy has a long history of bipartisan support and is one of those rare reforms that is not political but just good governance.

The executive order is designed to “protect Americans from facing unwarranted criminal punishment for unintentional violations of regulations.”

It recognizes what scholars from both sides of the political aisle have observed for decades: that federal criminal law is far-reaching, unintuitive, and difficult to understand.

The National Association of Criminal Defense Lawyers, the American Civil Liberties Union, the Charles Koch Foundation, The Heritage Foundation, the American Conservative Union, and many other groups have been advocating that the government clear up this tangled web of criminal laws because, as the executive order acknowledges, most Americans cannot reasonably understand what the law demands of them. And even accidental violations of arcane regulations can land them in prison.

This isn’t hypothetical. The National Association of Criminal Defense Lawyers keeps a database of Americans who have been criminally punished for violating obscure regulatory laws.

Not only do federal laws criminalize all sorts of behavior that is not intuitively criminal—like selling Swiss cheese that has too few holes—but many of these crimes are very easy for the government to prosecute because these laws often ignore a foundational principle of Anglo-American law, called “mens rea” (Latin for “guilty mind”).

That principle states that the criminal law should punish only those who violated the law with the intent to do something wrong.

In other words, you shouldn’t brand someone as a criminal and send them to prison if they violate the law accidentally. When that happens, civil or administrative penalties or tort remedies are more appropriate.

Consider the case of Lawrence Lewis. As chief engineer of a military nursing home, he occasionally rerouted sewage overflow in the hospice ward into a drainage pipe long-believed to lead into the city’s sewage system, which is what he had been trained to do. Unbeknownst to him, however, the pipe drained into a nearby creek.

Even though Lewis had no idea that he was doing anything wrong and was simply doing what he had been trained to do so as not to imperil the lives of the patients receiving hospice care, he was still prosecuted for violating the Clean Water Act, a criminal law that had no “mens rea” requirement.

That was a fundamentally unjust result, and it is that sort of result that this executive order addresses.

First, when executive agencies promulgate criminal regulations, the order requires them to be specific about what conduct is prohibited, and it requires them to state the applicable “mens rea” standard.

Second, it states that strict liability offenses (offenses with no “mens rea” standard) are “generally disfavored,” and that administrative and civil remedies should be pursued rather than criminal prosecution “where appropriate.”

Third, it requires agencies to “submit a brief justification for the use of a strict liability standard as well as a source of legal authority for the imposition of such a standard” to the administrator of the Office of Information and Regulatory Affairs when publishing a notice of proposed rule-making or final rule in the Federal Register.

Fourth, it directs prosecutors who prosecute regulatory crimes to focus on those people who “know what is prohibited or required by the regulation and choose not to comply” rather than on those people, like Lewis, who unknowingly and with no ill intent violate the law.

The order tracks a recent paper by The Heritage Foundation that explained how the executive branch could advance the cause of “mens rea” reform, although it does not go quite as far as the paper advocated.

Nevertheless, this order is a welcome and long-overdue development.

Consider what it would have meant for Lewis. First, any criminal regulations promulgated under the Clean Water Act would likely have had some clearly defined “mens rea” standard.

Second, under this order, prosecutors likely would have exercised their discretion not to prosecute him because he had no knowledge that what he did was wrong.

Rather than getting a criminal record at 60 years old for doing what he thought was right, Lewis or the institution he worked for might have faced a civil penalty instead—a more just result.

Although it’s too late for Lewis, this executive order will protect thousands of American in the future from unjust prosecutions for innocent mistakes.

Assuming, of course, that Biden does not undo it. Repealing the executive order would be a blow to the goal of a clearer and fairer criminal justice system, but for some of Trump’s most aggressive detractors, the temptation to undo something, anything, that he did might override the desire to govern well.

That’s why Congress should take more permanent steps to rein in the government’s tendency to criminalize everything.

Until then, this first step is something worth celebrating.