The Opioid Epidemic and the Overcriminalization Impulse 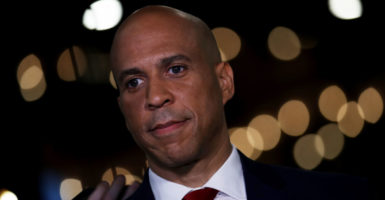 “Our country has made so many mistakes by criminalizing things … . We know that this is not the way to deal with problems,” says Sen. Cory Booker, D-N.J. (Photo: Drew Angerer/Getty Images)

During the first round of the recent Democratic primary debates, Sen. Cory Booker seemed at first to appreciate the dangers of overcriminalization.

“Our country has made so many mistakes by criminalizing things … . We know that this is not the way to deal with problems,” the New Jersey Democrat said June 26.

But then, in nearly the same breath, he called for a criminal law solution to the opioid problem.

Booker is right that the government is addicted to making a crime out of every little thing.

The original federal criminal code had only about 30 crimes in it. Today, there are almost 5,000, but nobody knows exactly how many. Add in federal regulations that carry criminal penalties, and that number skyrockets to somewhere north of 300,000.

The Congressional Research Service, the Justice Department, and the American Bar Association have all tried and failed to count the federal criminal laws.

The criminal laws cover not only things we all know are crimes—murder, treason, and robbery—but also things that no one would imagine are crimes.

The federal government has criminalized all sorts of things that no reasonable person would even know are crimes. One lawyer who set about trying to determine the scope of the problem estimated that the average American commits three felonies a day without knowing it.

Why does the government do this? Some of these criminal laws reflect very successful lobbying efforts by special-interest groups. Others reflect executive agency overreach.

But many are written simply because members of Congress want to show that they are serious about dealing with various social problems. Far too often, Congress’ reaction to a national problem is to declare that all those involved are criminals.

During the debate, Booker and former Rep. Beto O’Rourke, D-Texas, seemed to agree that pharmaceutical company executives should face criminal liability and imprisonment for their alleged connection to the opioid crisis.

For what would they be held liable? For manufacturing drugs that, when used properly, are useful? And what’s the end goal? To stop pharmaceutical companies from making opioids?

Prosecuting pharmaceutical companies for … something … is no remedy for opioid abuse. On that front, what we do need are grassroots community involvement, border security, and economic growth that brings hope and purpose to devastated communities.

But what we don’t need is a further unnecessary, unhelpful, and purely retributive expansion of the criminal law.