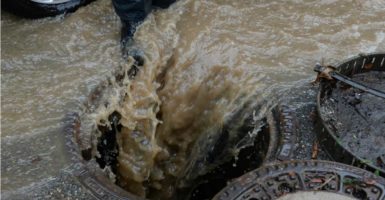 The sewage discharge from the DNC bus may also be a federal crime, depending on where that particular drain leads. (Photo: Patrick Seeger/EPA/Newscom)

Dumping raw sewage into a storm drain is a federal crime that has landed some unaware Americans in prison.

A DNC spokesperson described the sewage dump as “an honest mistake,” but it is actually a crime, and individuals have been criminally prosecuted for similar “honest mistakes” in the past.

This incident presents a familiar problem (one raised by the Environmental Protection Agency’s 2015 Animas River spill), that the government must choose: either stop prosecuting ordinary citizens for “criminal negligence” or enforce the same laws against more powerful or well-known parties.

At around 9:30 a.m., a man reported seeing someone get out of a DNC-chartered bus “and dump ‘it’s sewage into the storm drain.’”

The witness told Fox 5, “You don’t pull up and dump raw sewage on the street and in the storm drain. You just don’t do that.” In fact, if you do, it is a crime.

Police Capt. Jeff Smith told Fox 5, “There is a city violation for dumping materials into the storm drain system, obviously this feeds into streams.” The Lawrenceville ordinance prohibits dumping pollutants into the storm sewer system.

These discharges, according to city officials, “impact waterways individually” and “can have cumulative impacts on receiving waters. The impacts of these discharges adversely affect public health and safety, drinking water supplies, recreation, fish and other aquatic life, property values, and other uses of lands and waters.”

Unsurprisingly, the discharge from the DNC bus may also be a federal crime, depending on where that particular drain leads. Just ask Lawrence Lewis.

Lawrence Lewis escaped the projects of the District of Columbia, whereas his three older brothers were caught up in our criminal justice system and eventually murdered. Lewis worked for the District school system as a janitor while taking night classes, eventually becoming chief engineer for the Knollwood military retirement center. He was also a caretaker for his elderly mother and a role model for his two daughters.

Unfortunately for Lewis, the retirement home had recurring problems with sewage backup. After one backup, trying to protect the home’s patients from harm, Lewis did what his predecessors had often done and rerouted backed-up sewage into a storm drain. Lewis believed that the storm drain flowed into city sewage treatment facilities, but unbeknownst to him, the storm drain runs into Rock Creek, which flows into the Potomac River.

The Clean Water Act makes it a federal crime to negligently discharge sewage without a permit into “waters of the United States,” including Rock Creek and the Potomac River.

Lewis avoided a felony conviction and a long-term jail sentence by pleading guilty to a misdemeanor, for which he was sentenced to one year of probation.

The Democratic National Committee says that dumping sewage into a storm drain “was an honest mistake and we apologize … We were unaware of any possible violations.”

Now, the DNC seeks to use an “honest mistake” defense that was unavailable to Lewis, because it is not a recognized defense under the Clean Water Act.

It did not work for Edward Hanousek either, who was also criminally prosecuted under the Clean Water Act for negligent discharge without a permit after employees he supervised accidentally spilled 1,000 to 5,000 gallons of oil into Alaska’s Skagway River.

The man who reportedly saw someone dump waste into a Lawrenceville storm drain said, “It’s wrong, it’s absolutely wrong. I don’t care whose name is on the bus.” But as Lewis, Hanousek, and many others know, it is also a federal crime, regardless of who is responsible for the discharge.

Federal courts have held—as the 4th U.S. Circuit Court of Appeals ruled in West Virginia Highlands Conservancy v. Huffman (2010)—that the provisions of the Clean Water Act “apply to anyone who discharges pollutants into the waters of the United States,” including the folks on the DNC-chartered bus.

As Heritage Foundation scholars have argued elsewhere, “the government should be put to a choice: either abandon criminal liability based on negligence,” or bring charges against powerful parties “at the scene and up through the responsible chain of command. Sauce for the goose ought to be sauce for the gander.”

Already, however, The Washington Post reports that “Lawrenceville police told Fox 5 that they are not filing charges, but opted to hand over the investigation to the state’s Environmental Protection Agency.”