Finally, EPA May Be Held Accountable for Potential Wrongdoing at the Gold Mine King Spill 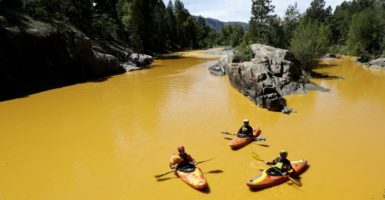 A 2015 photo of people kayaking in the Animas River near Durango, Colorado, in water colored from a mine waste spill. (Photo: Jerry Mcbride/Zuma Press/Newscom)

Criminal investigations into the Environmental Protection Agency’s disastrous handling of its Gold King Mine spill are under way. This is a laudable step toward accountability for the agency, which for one year has avoided accountability for conduct that would in all likelihood have resulted in criminal prosecution had the acts been performed by private parties.

One year ago, a backhoe operator working for the EPA had an accident that poured 3 million gallons of toxic water into Colorado’s Animas River, which pollution tests showed to have reached “‘scary’ levels of toxicity.”

The tests showed “arsenic peaked at 300 times the normal level; lead was 12,000 times higher than normal; mercury and beryllium, respectively, reached nearly 10 times and 33 times the EPA’s acceptable levels,” as The Heritage Foundation noted in a report.

No one at the EPA has been held accountable, despite the fact that private parties were convicted of “criminal negligence” when a backhoe accident spilled a comparably insignificant “1,000 to 1,500 gallons of oil” into nearby waters, and when a company discharged only natural elements such as “rock, sand, soil [or] stone” into nearby streams.

Heritage Foundation scholars have argued that the government “should prosecute the subordinate and supervisory EPA officials in this case or stop bringing similar charges against private parties for their negligence.”

When the EPA commissioned an investigative report by the Bureau of Reclamation—115 pages on all things Gold King Mine except who caused the spill and why—Heritage scholars argued “someone should ask the EPA and the Justice Department why the federal government discriminates in favor of government employees and against private parties.”

When the EPA followed up with its own report, which essentially argued, as Heritage scholars wrote at the time, that “the mine erupted on its own (which is like arguing, ‘But, your honor, I was just carrying the gun when it went off all on its own!’),” it seemed like accountability was nowhere in sight.

In a congressional oversight hearing on the Gold King Mine spill, Sen. Dan Sullivan, R-Alaska, asked the head of EPA’s Office of Enforcement and Compliance Assurance, Cynthia Giles, “Why has nobody in EPA been held liable, been criminally charged?”

Giles answered that that federal law treats “the company who makes and releases pollution” different from “entities that are trying to respond and clean up pollution that other people created,” and argued that at the time of the spill, the EPA was “acting as a responder.”

When pressed, Giles stated, “EPA does not typically assess penalties or pursue enforcement actions, other than to get response parties to clean up the mess that they make, and that is what EPA is taking responsibility for doing.”

One year later, however, the federal agency watchdog known as the inspector general for the EPA has confirmed that a criminal investigation into the agency’s conduct at the mine is under way.

According to an EPA press release, “Based on requests from several members of the House and Senate, the OIG is conducting both a program evaluation and a criminal investigation of the Gold King Mine spill.”

Finally, it’s time for accountability—although this may not be the best path forward to achieve that goal.

Last August, an EPA official “stood in a local high school auditorium after the Gold King Mine spill and pledged to a public audience that the EPA would ‘hold [itself] to the same standards that [it] would anyone that would have created this situation.’”

It did not, and New Mexico was forced to sue the agency to seek compensation for environmental and economic damages caused by the spill. The inspector general’s criminal investigation now shows the government has chosen between the only two legitimate options it had at its disposal, which Heritage scholars noted before, either “abandon criminal liability based on negligence” that the government enforces against private parties, or initiate a criminal investigation against “the EPA officials at the scene and up through the responsible chain of command” based on those same standards.

The government chose a criminal investigation, so it deserves credit for ending its discrimination against private parties.

Its choice may not be the best policy option, however. As Heritage scholars have argued elsewhere, “any liability for negligence should be civil, not criminal.” It runs counter to fundamental principles of law to think that a private party’s accidental discharge of sand, stone, or even oil—which can and should be redressed through civil law and penalties—deserve society’s most serious form of condemnation, a criminal sanction.

At least the disclosure that there is an ongoing investigation shows that the Office of the Inspector General for the EPA is performing its responsibility under the law. Congress created the inspectors general system in the late 1970s with the statutory duty “to combat problems of ‘waste, fraud, and abuse within designated federal departments and agencies.’”

New Problems Ahead for Inspector General?

The fact that criminal investigations are pending does not mean the EPA did anything wrong, or that any charges will or should be filed. Nor does it necessarily mean that the EPA’s antics are at an end.

The inspectors general have had more than their fair share of struggles to accomplish their mission under the Obama administration, as federal agencies have repeatedly refused to cooperate with investigations. In 2014, 47 inspectors general wrote a letter to Congress informing legislators of “the serious limitations on access to records that have recently impeded the work of inspectors general at the Peace Corps, the Environmental Protection Agency, and the Department of Justice.”

Whether or not the EPA is as recalcitrant, the EPA inspector general should be commended for doing what the EPA itself failed to do: take a significant step toward holding EPA officials’ accountable for what happened to the Animas River.